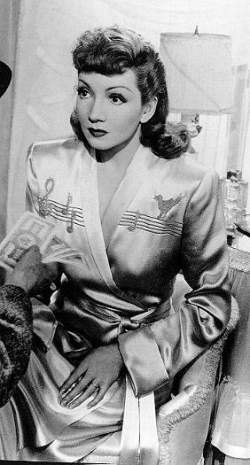 in The Palm Beach Story

.. Preston Sturges, son of a wealthy American family, served in the Air Force in World War I and invented a kissproof lipstick before turning to writing comedy during the 1930’s. (What else might one do after inventing a kissproof lipstick?) Sophisticated satire was his specialty and he found his greatest success when he started directing his own scripts during the early 1940s. (Readers of CV may have noticed the oft repeated thesis that a disproportionate number of the most successful films result when the writer and the director are the same party.)

In this prime period, Sturges turned out a series of fast talking, fast moving, slapstick laced movies starting with The Great McGinty, which, according to our favorite critic, Anthony Lane, was the first time in the history of talking movies that a writer directed his own material. "Sturges talk," says Lane, "is (a) bewildering balance: on the one hand, a chin-up, all-American assumption that dreams are right there within reach, like apples; on the other, a slightly alien cynicism toward such rosiness, and a heavy hint that the fruit, once tasted,may prove not to have been worth the plucking."

In The Palm Beach Story we meet Claudette Colbert, the charming, if spoiled, wife of struggling architect, handsome Joel McCrea. Never for a minute do we believe they don’t love one another, but Colbert decides to divorce McCrea and use her charms to access greater financial resources. She heads for Palm Beach, at the suggestion of a taxi driver, and proceeds to have a series of adventures which explore hilariously the ways that even a hint of sex can be turned into real assets.

There is a famous scene on the train heading south where a group of wealthy hunters, The Ale and Quail Club, get thoroughly soused, shoot up the train, and go rampaging through the Pullmans with their bird dogs. CV admits to finding this sequence a tad too broad and, as well, to finding the racist jokes to be more discomforting than funny. One line from Valee: "They always get the best of you." Times and sensibilities change.

But the story never bogs down and, once our couple meet again in Florida, connecting with Rudy Valee and Mary Astor as an amusing wealthy brother/sister team, the lines come fast and furious. "Chivalry is not only dead, it’s decomposed" is an often quoted classic, but there is one bit of dialogue that epitomizes the cynical wit of the entire piece:

Colbert, who spills out the fast lines with breathless facility and perfect timing, says at one point to McCrae: "Don’t you know that the greatest men in the world have told lies and let things be misunderstood if it was useful to them? Didn’t you ever hear of a campaign promise?"

Some things, it seems, never change.