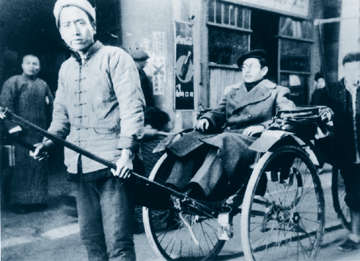 The score for the film (by John Zorn)

The story of the flight of Jewish refugees to Shanghai during the years preceding World War II would be fascinating even without a documentary as solid as this one. The archival footage is as good as you will ever see, including very rare shots of Shanghai harbor in 1938, half destroyed by Japanese bombardments. In the late thirties Shanghai was the only city in the world into which a person with papers stamped Jewish, or no papers at all, could enter freely. As a result, more than 20,000 Jews fled to Shanghai, a city of four million, during the period from 1938-1941. As one survivor states: "Getting out of Germany was never a problem. Finding someone who would take us was the problem."

We see and hear the refugees’ stories through home movies, letters, secret reports, photographs and government footage. We also see what those European Jews were fleeing: Austrian street scenes from 1938, complete with storefronts spray painted JUDEN and covered with derogatory caricatures. There are interviews with four survivors of the Shanghai Jewish experience: Fred Fields, Ernest and Illo Heppner, and Siegmar Simon. Through their recollections we begin to get a picture of the extraordinary lives they led during their decade in China.

What remarkable spirit! All four say that despite the deprivations they endured they wouldn’t change a minute of their lives in China. Once war had been declared on the United States and Britain, the Japanese made life difficult for all foreigners in China; they did not seem to single out the Jews in accordance with German dictates. When Germany declared that anyone who had fled the Reich would no longer possess valid German papers, the Japanese insisted that all "Jews

and stateless people" move into the Hongkew area that was already heavily populated with Jews. But they did not persecute them. Times got tough in the new ghetto, but were equally difficult for everyone in China.

Simon tells how the Jews would undercut the Chinese coolies to do menial jobs in order to survive – such as turning stone wheels with their feet to reduce coal scraps to coal dust which could then be made into charcoal. Illo Heppner relates the marvelous tale of her wedding in 1944. There was so little food she and her husband-to-be doubted they would survive the war, so they decided to get married right away. The wedding present Illo asked from her father was to buy enough hot water

to fill up a bathtub, so she could have the first hot bath she had had in years.

Eventually, when the war was over, the Jews in Shanghai began to feel the winds of change in China. There was a strong backlash against all foreigners, and it was clearly time to emigrate. Many went to America, Canada, Australia, and the new state of Israel. The European community emptied out of Shanghai, leaving behind only memories of the period when Shanghai was the most cosmopolitan city in the world.

Special mention must be made of the musical score by John Zorn. He used traditional Jewish instruments and, as well, added the pipa, a traditional Chinese string instrument, to create a unique mix of Klezmer, classical, and Chinese sounds. The music it is a joy and adds greatly to the pleasures of this exciting documentary.