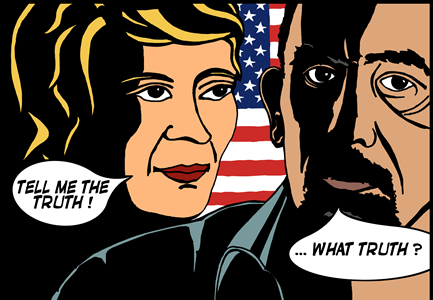 A documentary by Michael Tucker and Petra Epperlein

“The Prisoner” would never have been made in the pre-digital world. No one would have spent the money to make a film about one Iraqi’s mistreatment at the hands of the American military. In the old days, when shooting in film was an expensive undertaking, significance was dictated by money, and this incident would have been lost in the heap of similar incidents. It is not necessarily a significant subject when a man is wrongfully sent to prison; it happens all the time. Now, anyone with passion, chutzpah and a digital camera can go sniffing in that heap, take this incident or one like it, and make a movie out of it. And that one man, that one insignificant man, will have his day in court.

Directors Michael Tucker and his wife Petra Epperlein were already in Baghdad when the idea for this film was born. Tucker was embedded in an artillery of marines that were stationed out of the palatial residence of Saddam Hussein’s brother Uday. It was the beginning of the American occupation after overthrowing Hussein’s government, and the footage they gathered from two months of following these marines was made into the documentary “Gunner Palace,” released in 2005.

During the filming of “Gunner Palace,” Tucker followed American troops performing a raid of an Iraqi home where four brothers were suspected of plotting the assassination of Prime Minister Tony Blair during a planned visit to Iraq. Footage of the raid, which was also seen in “Gunner Palace,” shows the brothers tied up and kneeling in a small courtyard while the soldiers search the house for evidence and weapons. Nothing incriminating was found, but the men were interred anyway—at the infamous Abu Ghraib prison camp the Americans had set up to house terrorists.

One of the brothers, Yunis Katayer Abbas, was an Iraqi journalist who spoke some English. After the successful release of “Gunner Palace,” Tucker and Epperlein decided to turn their attention to what became of these four brothers who were featured in their last film. It turns out they were finally freed after nearly nine months at Abu Ghraib. When the filmmakers approached Yunis about doing a film about his prison experience, Yunis proved to be an engaging and articulate subject.

Unlike “Gunner Palace,” which showed us the occupation from the point of view of American soldiers, “The Prisoner” tells the story from an Iraqi point of view. The bulk of “The Prisoner” is interview footage of Yunis, and for the most part, it is fascinating. Yunis is not only an intelligent man; he is also perceptive and straightforward, with a tinge of sardonic humor that makes him more than a mere totem for the case being presented. He’s a man with an interesting past, as well, and the filmmakers allow him to tell stories unrelated to his imprisonment, but give us a sense of who he is, as well as a sense of the Iraq that existed before the war.

When Yunis recounts in a deadpan delivery how he was tortured for some journalistic faux pas that incurred Saddam Hussein’s rage, and how “that crazy man” even personally tried to give him hush money, his low opinion of Hussein feels like a typical one for Iraqis of that time. He talks of his days in the military fighting in the war with Iran with a nostalgia that seems strange but understandable in the wake of everything else that has happened to him. He is cynical when he talks of the U.S. occupation of his country, and the cynicism feels like it’s coming from more than his own treatment by the U.S. military. Nonetheless, Yunis describes that treatment with the taste of anger and humiliation still in his mouth. He talks of his time at Abu Ghraib as though it were yesterday—the squalid living conditions, the rancid food, the frequent mortar attacks by Iraqi insurgents, the psychologically abusive tactics used by his female interrogators.

With so much time spent listening to Yunis’ story, the film risks lapsing into monotony, but recovers with the introduction of interviews with former guardsman Benjamin Thompson, who came to Abu Ghraib as a prison guard in the wake of the scandal surrounding the arrest of U.S. military guards on torture charges. Unlike other military personnel Yunis encountered, Thompson is a breath of fresh air. There is a humane, almost saint-like quality to Thompson, and it makes us wish that the U.S. military had more men like him in Iraq. Thompson befriended Yunis and his brothers during his stay at Abu Ghraib, and Yunis remembers him fondly as “the good soldier.”

Thompson’s account of life at Abu Ghraib corroborates Yunis’ accusations, and “The Prisoner” becomes a haunting tale of life in occupied Iraq. The American military comes across as bungling and ineffective as protectors. If people thought we didn’t know what we were doing in Iraq before, this is yet more evidence of our incompetence. A few more “insignificant” stories like Yunis’, and we all might agree that our presence there is doing more harm than good.