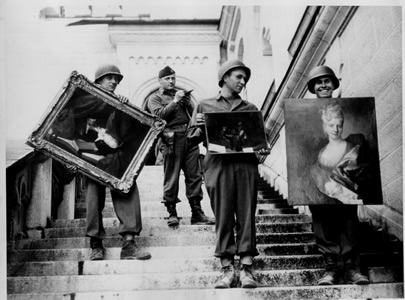 Based on Lynn H. Nicholas’s popular and still strong-selling 1995 book, The Rape of Europa is a riveting and carefully researched documentary history of easily the greatest art theft conspiracy in history. Bay Area film makers Richard Berge, Bonni Cohen, and Nicole Newnham, collectively Actual Films, have collaborated with Nicholas to trace the multi-fronted, nefarious, industrial-scale project of Adolf Hitler to re-invent Western art history. The film also updates historical developments since the original publication of the book. What results is a must-see, seminal piece of historically important documentary film making.

The Nazi conspiracy to steal the world’s greatest works of art emerges here as a far more complex and destructive crime, likely the greatest organized criminal act against human culture, outdone only by Hitler’s racial conspiracy of the genocidal annihilation of Europe’s Jews. Central to both was Hitler’s ghoulish concomitant expropriation of the sum total of the former property of an entirely dispossessed people. This is a new thought in the world today.

To fulfill the millennial fantasy of a Third Reich Europe free of Jews – the casual mind thinks simplistically in terms of physical presence — would require not just rewriting history books, but the thorough removal of any vestige of Jewish art, Jewish property, Jewish cultural presence, and a literal reconfiguration of the cultural landscape of Europe. In a bizarre way, Hitler’s master plan could be thought of as out-Disneylanding Disney before Walt Disney got there himself. Hitler’s “hobby” of redesigning Berlin as the New Rome, and recasting Linz as a living Gesamtkunstwerk museum, lay at the very core of his dream of an alternative future.

And herein lies the revelation for today’s new millennial audiences. One vast archive transcribed and uploaded for web access after another, one long lost masterpiece appearing on the auction block after another, one nasty, complicated, drawn-out legal battle after a long missing work of art turns up in public after another, all begin to add up after a while. In a world of global corporate greed and wealth and über-meta-superlative squandering of non-replenishable resources, Nicholas and Actual Films directors’ heroic efforts to present something approaching the first full account of what happened in that short span of Nazi rule stagger the imagination. It will be generations before the world, or the West at least, will begin to appreciate the annihilation of the world’s cultural treasures that once made up Iraq and the Middle East. An end to that devastation is still nowhere in sight.

Narrated by actress Joan Allen, the film opens and ends with the story of Gustav Klimt’s famous commissioned portrait of Adele Bloch-Bauer, a member of a prominent Jewish Viennese family, dubbed the “Gold Portrait,” which was stolen in 1938 by the Nazis. It turned up after the war, but was not returned to its rightful owner until decades and long legal battles later. Its most recent claim to fame is as the most expensive painting ever sold — Ronald Lauder paid $135 million for it. This case is but the tip of the iceberg of discoveries and court cases yet to come, a process which will continue to unfold for another hundred years and longer.

The narrative moves back and forth through time, making prodigious use of recent interviews, historical newsreels, and archival film footage from several different countries, much never seen by the public before. Recovery work began even before the war ended. “Monuments men,” mostly American art historians and curators, were dispatched during and after the war to safeguard, identify, and restore many of the art treasures. Scenes of industrial-sized warehouses full of paintings, salt mine tunnels clogged with piles of looted art, bonfires and rubble heaps of art beg the mind’s ability to comprehend. The film progresses through time, focusing on one city or museum, each an exemplary case typifying the vast scope of the project of protection or recuperation. During the Allied bombing of Florence, for example, American pilots were carefully briefed to avoid bombing art treasures. In other cities, such loss was not avoided. Perhaps the most painful of such was the notorious fire-bombing by British pilots, in a no-holds-barred vindictive bombing of many German art treasure cities in the final days of the war. Americans may likely think of Dresden as portrayed in Kurt Vonnegut’s Slaughterhouse Five.

The relationship between Hitler’s obsession with art, as a means to dehumanize his enemies and apotheosize his master racial aesthetic values — and just how integral to Hitler this strategy to redraw the geopolitical map through bald physical brute force was — stands today as a fresh, new, soul-shriveling warning out of the past for humankind to heed what it does today. We have seen the small beginnings, as documented in Degenerate Art, thedevastatingly insightful 1993 made-for-TV documentary by director David Grubin. It is not clear yet whether anyone, outside of art experts and connoisseurs is even really taking note, let alone beginning to learn the lessons from the dark side of present-day human psyche.