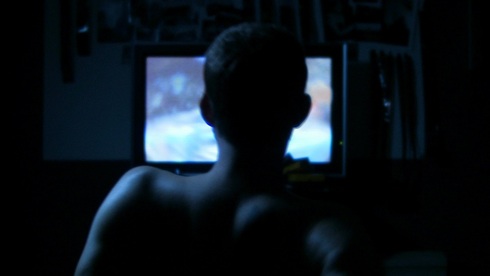 The premise of David Bruckner, Dan Bush and Jacob Gentry’s three-part horror film, The Signal, is quite simple. One evening in the city of Terminus, on New Years Eve, all transmissions over all media – cell phones, television, etc. — are interrupted by a signal. Its effect is to transform many of its audience into homicidal maniacs who calmly, and with every appearance of rationality, begin killing the people around them. Not everyone is affected. But enough people are to cause society to collapse within hours.

On February 11th, I met with the three writers and directors of The Signal to discuss their film.

PFT: What led you to make this movie? Is there something specific that gave you the idea for it?

Bruckner: For me there was a period in or around the election when I was watching C-Span and cable news, driving around in my car listening to a lot of talk radio. There was lot of media noise in my world. I was feeling a lot of anxiety. The signal-to-noise ratio was very high.

Gentry: Whenever you go into a department store, or a K-mart or Walmart they actually have televisions on every aisle where they can advertise to you while you’re waiting to purchase your items. The gas station now has CNN and news channels coming through on the pumps. It has to do not with consumerism, but the presence of media. It’s ubiquitous and it’s infiltrating our lives in a way we don’t understand.

There is an identity crisis that Americans have to deal with, a lack of a sense of belonging. We don’t have the historical lineage that other countries have. We’re having to invent who we are. Half the discussion is coming from a corporation.

Bruckner: People ask, “Where in the world did you get this idea?” as if it were from left field. Living in America today, where didn’t we get this idea? (Laughter)

PFT: Your film is divided into three segments. What were the challenges in making that kind of film? Did they lie in differences in style and emphasis, or was it simply a matter of making the plot mesh smoothly?

Bruckner: The first section is more rooted in the real. But the second one, because it goes inside the mind of the signal and this insane territory, it opens the door for comedy and satire. By the time you get to the third chapter, you want to find a solution to problem.

Gentry: We wanted the audience to take the movie seriously. And before you start giving absurdity, you have to give them a suspension of disbelief that this world is close enough to our own. You have to have a realistic environment. Once you create that then you start piling the problems on top of that. And some of the great performances of insanity have always had this sense of fun, of satire.

PFT: Could you tell us a little about the film that opens the movie, the film-within-a-film? It seems to be a throwback to horror films in the 1970s, like The Last House on the Left…

Bruckner: It’s an excerpt from a film [The Hap Hapgood Story] that Jacob made for the 48 Hour Film Festival. We always felt the scene between the two lovers in the first segment of The Signal was a landing place, a place we wanted to settle on after an opening event. We would have something visceral and loud to open it up.

PFT: The film-within-the-film is interrupted by the signal. The camera pans back and the audience learns, first, that we are watching this film on television presumably along with a character in the movie. Then, when we hear Ben say, “Hey, the television came on,” we realize that, in fact, it was just us watching the film, not any of the characters. In a way we’re made complicit with the violence of that movie.

Bruckner: It’s a way to prep the audience for the way this movie is going to go. We’re going to change the channel repeatedly. This is meant to make the audience question their own relationship with the film and how their own perspective and insanity is related to what’s going on.

Bush: It’s sort of like some of the stories of Edgar Allen Poe when you’re identifying with the protagonist only to find out that he was insane and you were insane too. And then you see that he’s completely fucking insane. (Laughter)

PFT: The insanity in this movie has something very rational about it, though. One of the characters, Rod, says for instance, that everyone “just decided to start killing each other.” These aren’t zombies…

PFT: You mentioned Edgar Allen Poe earlier. Are there any other references from literature that have influenced you?

Bruckner: Well, I read The Road after the movie. Cormac McCarthy’s novel. He asks the same questions. What are the stakes, and what would people do if society collapsed? But really, I thought more of Grand Theft Auto. I think simulation is becoming more and more a part of our view.

Bush: I think a lot of the influence is in real life. Everything from the Manson murders to Columbine. You don’t’ have to look far for inspiration and how we treated that and how dark we got with it.

Gentry: Faulkner’s The Sound and the Fury for the multiple perspectives, where you see the same things from completely different points of view.

We’re not indicting any particular group… All we’re doing is delving into the fears of a media dominated society. We’re not passing judgment on who’s doing what. We’re just out to make a scary movie. If there is any sort of social commentary or if there’ a social critique, it comes from the fact that if you make anything that’s relevant and true you do it from a relevant point of view and take an honest approach.

Bush. Our job as a filmmaker is to find truth in a fictional circumstance.

Bruckner I’m really interested in the relationship between video games and movies. Where the signal is concerned, these ideas and these images and the impulse to do so exist somewhere in our consciousness as a set of options. What if I could go around and create chaos without moral consciousness?

Bush: Absolutely it does. Media always provided a sense of connection among people. To what degree does that satisfy… Human beings at their base, need to belong to participate in a mind like that is always more powerful than their need to provide and preserve life.

Bush: People need a corporate sense of identity. They need to belong. However media does that, it supplies that need. At what point are we all victims of that?

Gentry: What nobody ever asks about is “What is the signal and how is it doing all these horrible things?” It’s quite simple really. Literally – click! – all you have to do is turn it off.