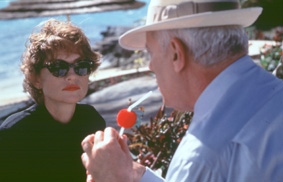 The Swindle is director Claude Chabrol’s homage to Alfred Hitchcock, with a wink at David Mamet. Chabrol, nearly 70, has been making films for forty years. He is a veteran of the New Wave and, like the other New Wave directors, he knows his film history. The glory of being so well established is that Chabrol doesn’t have to prove anything to anybody. He can relax and play on the screen and have a good time, even as we do with a light, but very skillfully wrought piece of fun like The Swindle.

Right from the main titles, Chabrol sets his tone. As the camera pans across a luxe casino, the titles are scrolled over the screen by an animated roulette ball. Gimmicky, yes, but deliberately so, and a reference to all the overdone, cutesy main titles from the 1950s. (If it hasn’t already been done, surely someone is this very minute writing a Ph.D. thesis on the deconstruction of main titles in modern film…)

We immediately meet Betty (Isabelle Huppert), wearing a truly tacky black wig and coming on to the ordinary looking guy sitting next to her at the roulette table. Some rapid repartee (Huppert in a perky, comic mode) and she learns that he is a lawn mower salesman. "C’est poetique!" she exclaims and we know that the scam is on. Betty is a grifter, working in tandem with Victor, played by droll Michel Serrault whose acting career parallels in time the directing career of Chabrol.

Chabrol wrote the screenplay for The Swindle, too. No stranger to the subject of crime, he now weaves a plot reminiscent of Mamet’s wonderful House of Games. Plot, mind you, not tone. House of Games played it pretty straight; Chabrol is in a tongue-in-cheek mode. If the subject is conmen and the genre is mystery, both of these guys are gonna give you the con wrapped in a con, containing yet another con. Trust no one. Suspect everyone. It will still have one more angle to unfold that you will not anticipate.

CV readers know that we don’t like to give away great chunks of plot; it will spoil your enjoyment of the film. Suffice it to say that Betty and Victor, who make a point of keeping their exploits relatively small, staying under the radar, as it were, now get into deeper waters than usual and the question is whether they will sink or swim out there with the sharks. (Editor! Block that mixed metaphor!) Along the way, we see that Victor has the instincts of a bookkeeper and the frugality of a French farmwife; this is crime at the bourgeois level. The bellman at the hotel needn’t wait for the tip that never comes.

Chabrol gently throws in references to bigger scams – referring to the missionaries who first settled in colonial outposts as the decoys of the capitalists who followed to exploit the natural resources. Lies in the media are alluded to. It’s all a scam, he is suggesting, so let’s not be too judgmental about these two strangely matched thieves eking out their living.

The beauty is often in the details, sometimes rather mysterious themselves. Betty calls Victor "Daddy" and we wonder, but don’t really find out, just what the nonprofessional side of their relationship is about. In the climactic scene, dominated by a sinister gangster, known only as Monsieur K (Jean-Francois Balmer in a tour de force performance), there is an unidentified member of the household sleeping in a chair throughout the proceedings. Monsieur K is casting himself as Scarpia to Huppert’s Tosca, even as he twice plays the recording of the last scene of the opera (making a point of identifying the recording, thank you, specifying that it is Domingo and Freni singing).

If red herrings are in evidence, who better to provide models than Hitchcock, and, indeed, Hitchcock more than once made the petty crook a sympathetic charmer as well. You don’t for a minute think you are at anything but a Chabrol film here, but M. Chabrol has very clearly invited Hitchcock to the party.