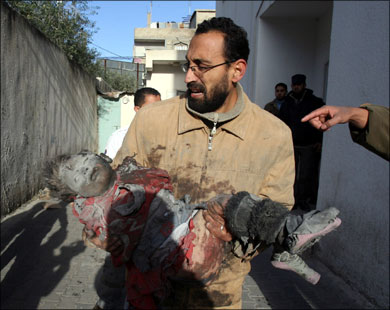 The War Around Us

“Passionate” is hardly the word that comes to mind when you think of Americans in their 20s and 30s. Self-involved perhaps, indifferent perhaps, but not passionate. And so when I heard the rapid, determined footsteps outside the Arab Film Festival’s San Francisco office, I wasn’t surprised when the 37-year-old Libyan-American director Abdallah Omeish opened the door and began to speak passionately of his film “The War Around Us.” The film’s San Francisco Bay Area premiere at the Roxie Theater was the occasion for our talk.

The film, which recently won the best documentary award at California’s Newport Film Festival, chronicles Israel’s savage assault on the Gaza Strip from December 2008 to January 2009. Such a subject is a very hard sell in a fantasy-driven culture like ours, but you’d never know that from the way Omeish talks, frequently emphasizing points with his hands. “The attacks weren’t covered because most western journalists had left Gaza,” he says, explaining that the Gazan’s daily trials—food shortages, unemployment, poverty—weren’t sexy enough. What the world “witnessed” was the international media stationed in a field outside Gaza reporting on the conflict as if it were a golf tournament. And “Caddyshack” it ain’t.

But how do you get into a war zone when Israel, the U.S. and the ever-complicit international community don’t want you there? The way had to be through the people, and so Omeish decided to tell his story through the eyes and hearts of two people who were there—”Al Jazeera” correspondents Ayman Mohyeldin and Sherine Tardos. This frame story gives some sense to the senseless carnage visited upon Gaza.

“I wanted to show what the reporters encountered,” Omeish said during our interview, explaining further that he was determined to show that “a normal life is not being lived in Gaza,” and that the attacks—by U.S. F-16s firing white phosphorus DIME bombs during IDF (Israel Defense Forces) air strikes, as well as land and sea military incursions—continued “the collective punishment of Gaza.”

This punishment with state-of-the-art weapons was, to put it mildly, severe, and you’d have to be totally insensitive not to be shocked (can anyone still be shocked in these days of youtube videos of the massacres in Syria?) by what you see in the film, and Mohyeldin and Tardos see it all. And what they experience—Tardos had never been in a war zone—tests their capacity as witnesses as well as their friendship. The carnage and the devastation—both external and internal—is heartbreaking, as in a scene in Gaza’s Shifa Hospital where a little boy can barely recount his ordeal of being trapped for days with the dead bodies of his family.

Omeish clearly knew what he was taking on when he made “The War Around Us.” “I wanted to reduce the violence because less is more,” he says, explaining that the audience would have felt beaten up by the experience if the extreme violence of in the images wasn’t mitigated by post facto studio interviews with Mohyeldin and Tardos.

Another leavening factor is Austin Wintory’s well nigh miraculous score, which is a far cry from the usual anodyne doc one. He gets extraordinary contributions from cellist Stephen Erdody who is first desk in countless studio orchestras, violinist Roger Wilkie, harpist Charissa Barger, vocalist Holly Sedillos, and does the programming—rhythm and percussion tracks—himself.

“The War Around Us” is a harrowing experience; one scene in particular says it all. A father finds his tiny daughter—her corpse wrapped in cloth—on a small shelf in the morgue. “I want to see her, I want to hold her by myself, I want to kiss her,” he cries, and when he realizes she’s dead, he faints, his face hollow with grief as they bear him away.

“I wanted people to question war. The price of it is very high,” Omeish says, and the price of it is written on the faces of every person, especially the children, we see in Omeish’s truly remarkable film.