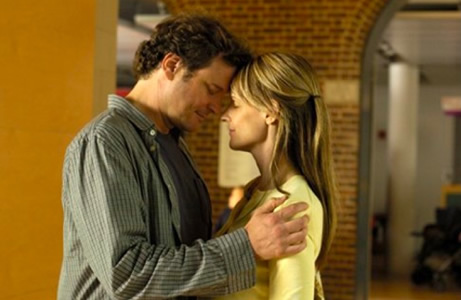 MPAA rating: R (for language and some sexual content)

It’s probably not a good idea when first learning soccer to start with a bicycle kick (where you do a flip and kick the ball while your legs are pointed toward the sky and your head is headed toward the ground). If you’re just learning about economics, you might not want to invest your life savings in one company. If you haven’t done much cooking, it’s probably a mistake to try crème brulee for the in-laws. And if you’re making your first film, you might want to stay away from the hardest of all genres- those European type films that are funny, poignant, absurd, and sad in adjacent scenes, or even in the same scene. Helen Hunt has tried to do this very difficult thing, and she hasn’t done it very well.

Hunt co-wrote the screenplay and directed her first feature film based on Elinor Lipman’s eponymous popular novel. April (Helen Hunt) is adopted, Jewish, an elementary school teacher, and tying to have a child while her thirty-nine year old biological clock ticks away. But that desire is put on hold when her husband Ben (Matthew Broderick) leaves her- seems he just doesn’t want to be married and is quite content to move back in with his mother. Then April’s own, nagging, Jewish mother dies. And April’s biological mother, Bernice (Bette Midler), a zany talk show host, suddenly appears and wants to establish a close mother-daughter relationship. Sounds painful and complicated. Also sounds like it could be grist for a comedy. But sounds like it could be both?

The plot follows the evolving relationship between mother and daughter (Mom is tacky, brassy, and a near-compulsive liar. You’re right, Bette Midler is perfect for the role). And it introduces the required romance, in this case between April and the single father of one of her students. Frank (Colin Firth) is harried by parenthood, immediately smitten with April, adorable and smoldering, and appropriately jealous that April still hasn’t gotten over the infantile husband who abandoned her. Will April get beyond her “real” mother’s pathologies in order to forge a mother-daughter relationship? Will her ex-hubby become the male buddy that apparently all women want? Will romantic love survive the hardships of courting and mating amidst young children? Will April get to have her baby? We all know the answers to these questions.

The problem lies not in predictability, but in tone. And I like Helen Hunt, but the failure seems to fall squarely on her shoulders. She grounds her film in a strong sense of reality; these are supposed to be real people with real emotions. But then the mother cannot die on one day, and by the next no one seems to care about or notice her absence. You can’t portray the ex-husband as immature and fatuous and then not explain why April would still be attracted to him. And Hunt can’t have her actors mugging for the camera and expect us to take them seriously Confusingly and annoyingly, scene after scene plays serious when they should be funny, and plays funny when they should be serious.

Take one example. After April has been abandoned by her husband, Ben (which we’re thrilled about since we know he’s a jerk), and is gliding into a new relationship with Frank (which we’re thrilled about since he’s Mr. Darcy)- she runs into Ben and inexplicably starts dry humping with him in the back of her car, in the middle of the day, on a crowded street. Public, awkward sex in cars could be funny. Why she would want to be humping with her ex-husband could be interesting. But given the emoting actors and how the scene is constructed- it just feels icky, uncomfortable, unsexy, and inexplicable. The audience groaned. Appropriately and audibly. We weren’t experiencing this as a poignant moment of April’s desperation and fragility. Nor was it absurdly funny. Nor was it both. Alas, Hunt gets the tone wrong in scene after scene. And unable to find that delicate balance between humor and pathos, her movie lurches awkwardly between the maudlin and the silly.

I’m guessing that Hunt thought she was making an interesting chick flick. It’s a genre enjoyed by both middle aged men and women, be it the romantic comedies (One Fine Day), the comedy-dramas (Pretty Woman), or the dramas (Steel Magnolias). But having women’s issues front and center- mother/daughter stuff, wanting a baby, bad husbands, and the hope for true love- can’t work unless the tone works. Helen Hunt probably could have made this into a delightful little comedy or a thoughtful drama. But the clumsy mixing of those elements makes for an awkward mess.

(20607)
$6.49 (as of January 25, 2021 - More infoProduct prices and availability are accurate as of the date/time indicated and are subject to change. Any price and availability information displayed on [relevant Amazon Site(s), as applicable] at the time of purchase will apply to the purchase of this product.)

(18810)
$6.99 (as of January 25, 2021 - More infoProduct prices and availability are accurate as of the date/time indicated and are subject to change. Any price and availability information displayed on [relevant Amazon Site(s), as applicable] at the time of purchase will apply to the purchase of this product.)
related posts