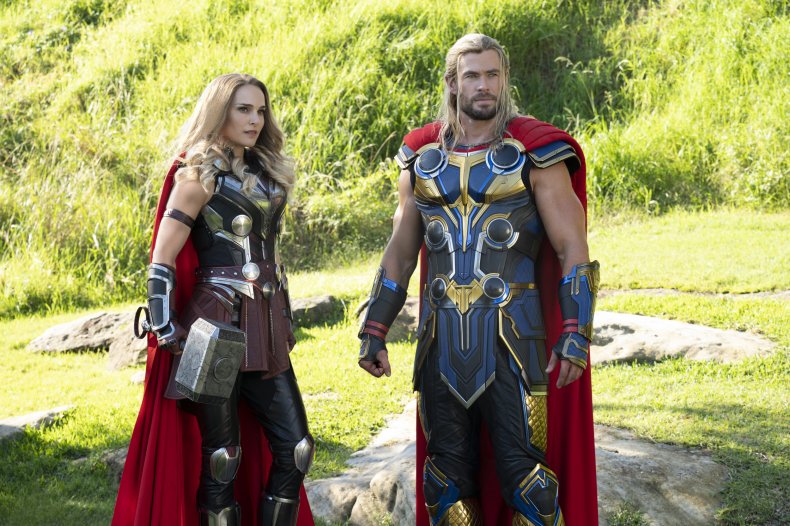 George Wu holds a masters degree in cinema studies from NYU. He eats, drinks, and sleeps movies. Fortunately, he lives in New York City, the best place in the country for disorders of this type. He also works on the occasional screenplay when inspiration strikes, but his muses don't slap him around enough.

Writer-director Taika Waititi’s follow-up to his delirious Thor: Ragnarok, which is near the peak of all Marvel Cinematic Universe movies, is a disappointing Thor: Love and Thunder. The comparisons favor Ragnarok in every way. As Thor, Chris Hemsworth found his comic zenith, both in timing and delivery, in Ragnarok, but while he maintains his amiability in the new film, the jokes written for him are not nearly as good – a mix from lightly amusing at best to groan-worthy at worst. Instead of partnering with Loki, Valkyrie, and the Hulk, in this outing Thor gets Jane Foster (Natalie Portman), Valkyrie (Tessa Thompson), and Korg (Waititi himself). In Ragnarok, Valkyrie had a vitality and ferocity to her. Here, she is written with no sense of importance and feels like a mandatory inclusion for the franchise more than a character. Natalie Portman is more palatable in Love and Thunder than any other Thor movie, but that’s not saying much. Korg was always a throwaway gag and could never be taken seriously as a character so he certainly can’t sustain so much screen time in Love and Thunder. For the antagonists, Christian Bale tries his best as Gorr the God Butcher, but he has nothing on Cate Blanchette’s hilariously vampy Hela. In other words, Tom Hiddleston and Mark Ruffalo, not to mention Cate Blanchette and Jeff Goldblum, are sorely missed.

Love and Thunder’s plot is loosely adapted from Jason Aaron’s run on the Thor comics in which the alien Gorr prays for dire help and is neglected by his god. He acquires the vastly powerful Necrosword or perhaps it is equally apt to describe it as the Necrosword acquiring him, in order to kill all gods across the cosmos. In order to save his fellow Asgardian Sif (Jaimie Alexander) from Gorr, Thor leaves his erstwhile companions, the Guardians of the Galaxy (Chris Pratt, Karen Gillan, Dave Bautista, Pom Klementieff, and the voices of Bradley Cooper and Vin Diesel get probably less than 10 minutes of screen time at the beginning of the film). Thor quickly discovers that his old lover, astrophysicist Jane Foster, found his broken hammer Mjolnir, somehow reassembled it, and it now bestows Thor’s power upon her (courtesy of a worthiness enchantment that also gave Captain America the power of Thor in Avengers: Endgame). While the Love and Thunder story makes some improvements on Aaron’s, like not having Thor spiral into a depression-filled funk, it loses the epic feel that Aaron’s story had, mostly because everything feels rushed.

The too-quick pacing gives the sense that Waititi would rather get to the next joke than let scenes breathe to provide either dramatic or emotional beats. Anthony and Joe Russo showed how to generate great character entrance scenes in Avengers: Infinity War and Endgame, which audiences loved, but Waititi blunders his ample opportunities to do the same in Love and Thunder. Instead, the priority is always the next gag and the next star cameo, from Simon Russell Beale as Dionysus to Kat Dennings returning as Darcy Lewis, but the biggest of which is Russell Crowe as Zeus. Crowe dons a weird, vaguely Italian accent and makes Zeus a blowhard obsessed with orgies.

The Zeus subplot though comes with Omnipotent City, where the gods congregate, and it is a sumptuous, dazzling feast for the eyes. The most striking aspect of the movie is DP Barry Idoine’s visuals, albeit aided by lots of CGI. Gorr’s shadowy home is bleached of color, and the high-contrast black and white is beautifully rendered with interrupted color by virtue of Valkyrie wielding yellow energy and Thor’s blue lightning. However, these days, movies have so many special effects that VFX houses are hired from all over the world to do a scene here and there. This can lead to a significant disparity in quality over the course of movies with a lot of CGI. Love and Thunder mostly has terrific visual effects, but now and again, very much not so terrific, notably in the early Guardians of the Galaxy scene where nothing outside of the actors looks real.

Except for a surprising amount of cursing, Thor: Love and Thunder feels at times like a paean to an older era of Disney, especially pandering to the 8-year-old set with the inclusion of a couple of dozen kids in the story. It’s hard to make sense of this silly part of the story except as an appeal to this demographic. Of late, Disney has been over-milking its many franchises, churning out quantity over quality in order to populate its relatively new streaming service. Disney bought Pixar for over $7 billion, Marvel Studios for $4 billion, and Star Wars licenses for $4 billion. Each has huge fan bases, but they are fans for a reason, and it is not for huge doses of middling content. Disney is greenlighting productions, whether it be movies or Disney Plus shows, before they are ready. Waititi clearly put a lot of love into Thor: Ragnarok. That is missing from Thor: Love and Thunder, which feels more like slapdash product.
George Wu
wugman@gmail.com