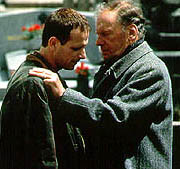 Those Who Love Me

Can Take The Train VHS

Those Who Love Me

Can Take The Train DVD

Are there any really good films with scripts written by three writers? Film is by nature a collaborative art, with writer, director, actors, cinematographer, editor, and all the other members of the team bringing their specialized skills to the table. But screenwriting by committee? It has the ring of a warning bell and, unfortunately, the bell tolls for Those Who Love Me Can Take the Train. A major hit in France, Patrice Chereau’s new film seems unlikely to do as well on this side of the Atlantic: American audiences for foreign language films are not likely to be much interested in soap operas.

Those Who Love Me starts with a somewhat schematic premise. Jean-Baptiste, a powerful artist/teacher, has died and will be interred in the city of Limoges, his family’s home. His Parisian friends and lovers of both genders embark by train for the funeral in Limoges, as the deceased is transported in a station wagon, often visible from the window of the train. Even as the varied relationships with Jean-Baptiste are disclosed, conflicts, jealousies, loves, and resentments flair anew in complicated patterns. It takes a concentration of will to keep them all sorted out, and it is questionable in the end whether the complexity of structure supports any particular complexity of thought or insight.

Not only complexity of structure stands in the way of cogent story telling. A number of the characters and relationships, particularly within Jean-Baptiste’s blood family, are only superficially explored. A lot of possibilities are thrown into the mix (Jean-Baptiste was a twin, for example), but it is no more than a tease when they remain no more than undeveloped suggestions, hints that lead nowhere. .

The relationships at the center are those of a married couple in the process of breaking up and a male homosexual couple complicating their lives as each has an affair with the same, much younger, HIV positive man. All the relationships and all the characters are in the vulnerable emotional place of focused change that the death of someone close precipitates.

What emerges, though, is not a sympathetic group of people learning from their life experience, but an almost uniformly self-centered collection of individuals, each focused on his or her own selfish needs and wants. (One woman cries out, "I was his impossible dream! I was Woman!") The gathering together and the mourning are more an excuse to hysterically act out old resentments than an occasion to work though to new understanding and – dare one hope? – forgiveness.

First rate acting by the ensemble cast spreads a thin veneer of credibility over the proceedings, but the coating of performance cracks for lack of the support of any real heart underneath. And none of the multi-participant ranting is assisted either by a hyper-active hand held camera jumpy enough to make an aerialist dizzy or a lighting scheme so dark that most of the time faces are shrouded in shadow.

Committees may be necessary to run a democracy but they do not seem an ideal structure for writing a good movie.