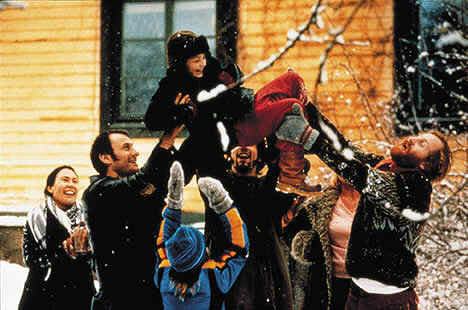 A film praised as "warm as a woolly sweater,&#148; Together takes place inside the close confines of a mid-70s commune in Stockholm, Sweden. Within those cramped quarters, director/writer Lukas Moodysson (Show Me Love) skillfully weaves a tale of alcoholism, family break-up and political debate, bringing it to a tender conclusion.

Together opens with the news &#147;Franco is dead&#148; &#150; a suggestion of the changing political tide of the time. Crowded around a large wooden table, the socialist members of the collective gather to eulogize over porridge, dispute whether washing up is bourgeois, and argue over Pippi Longstocking&#146;s reality: was she a capitalist mascot or not?

But Moodysson&#146;s goal was not to make an anti-liberal statement, despite sometimes mocking his characters’ outrageous far-left views. Nor is this a film about the 70s &#150; though the tones of the era ring out with its ABBA soundtrack. His aim instead was to create a film that shows what happens when you bring diverse personalities together under one roof.

One of the community members Goran (Gustaf Hammarsten) welcomes his sister Elisabeth (Lisa Lindgren), who has just left her abusive husband, and her two young children Stefan (Sam Kessel) and Eva (Emma Samuelsson). Their arrival causes disruption but the challenge soon forces the housemates to re-evaluate their priorities and learn new truths about other people&#146;s lives and their own. It is the children who find it hardest adjusting, making the transition to a television-free, meatless setting where split couples question their sexuality. Yet it is they who have the greatest grip on reality of all these characters.

Emma Samuelsson, who plays Eva, delivers one of the most poignant statements in the film while trying to explain the commune to a new friend who lives in a conventional three-family household next door. She describes her new home as "a place where the people want everything to be the opposite of the way it&#146;s supposed to be. While most people want it to be sunny outside, they rejoice in the fact that it&#146;s cloudy. If everyone&#146;s happy, they think you should be sad.

The character Signe (Cecilia Frode) is a perfect example such contrariness. She declares herself to be a political lesbian simply because it&#146;s the exact opposite of what everyone would expect, but she’s still emotionally attached to her ex-husband, Sigyard (Lars Frode).

There are some hilarious yet morose moments in the film that move you both to laughter and tears. The most complacent of all the characters, Goran, who acquiesced to an open relationship with his live-in girlfriend Lena (Anja Lundqvist) so she could sleep with his housemate, loses it in a tender scene when Elisabeth&#146;s husband comes begging for forgiveness. Something clicks within him. He emotionally erupts, ending his relationship and throwing Lena out.

As the community draws closer, the ironically rigid rules of the liberal commune are rethought. A &#147;We want meat&#148; protest from the youngsters permits sausages to be included on menu. A "mind-warping" television is also brought in, but forces out two members who are opposed to the lifting of sanctions.

Known for his claustrophobic style of directing, Moodysson captures the chaos of the commune while closing in intimately on each character, getting under their skins and the audience’s as well.