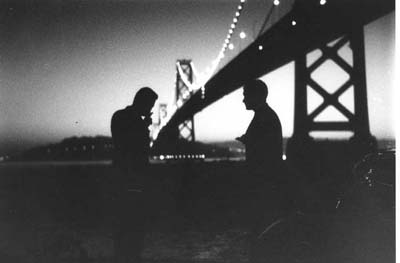 Scott King&#146;s debut feature Treasure Island ought to be put into a time capsule so future generations can see all of the bad things that make up what we call "independent films." Shot in an ultra-low budget black-and-white, with forgettable actors who are outmatched by their underwritten roles, it chews on many of the favorite themes of indie cinema: sexual alienation, racial stereotyping, the truth underlying recorded history, and that mind-numbing perennial, "the question of what is real."

King has taken the B-grade World War II spy thriller and tweaked it with an experimental sensibility. Set on Treasure Island, a former naval base in San Francisco Bay, he tells the story of two American counterintelligence officers, Frank (Lance Baker) and Sam (Nick Offerman), who are preparing a disinformation campaign to be launched in anticipation of the invasion of Japan. They plan to fit a corpse with fake invasion plans and throw it into the bay to be found by the Japanese, and in order to create a backstory for the body, they must write up love letters, create identity cards, open phony bank accounts, and so on.

As the two men go about creating their new human being, their discussions cause them to examine their own lives. Frank is a bigamist married to two social outcasts: a Japanese woman in hiding from the authorities and a woman whose mysterious skin ailment has turned her into a hermit. Meanwhile, Sam and his wife pick up strange men with whom they engage in discomforting three-ways; Sam spends most of his time in these sessions avoiding eye contact with either party. As the crises in Frank&#146;s and Sam&#146;s lives intensify, the dead man (Jonah Blechman) not only arises from the dead, but begins asserting himself into both men&#146;s reality with odd and increasingly alarming results.

Although he shot his film with a 1932 Mitchell camera, King didn&#146;t attempt to re-create the feel of the old spy flicks &#150; Treasure Island isn&#146;t a spoof. Frank and Sam don&#146;t talk like Joe Friday, and the movie is cut like an experimental film, alternating lightning-quick scenes with takes that are long enough to melt an iceberg. This is probably all to the good, if only because nothing feels right when King attempts to replicate old movies in a brief prologue. The prologue &#150; consisting of a fake spy serial episode and newsreel &#150; not only doesn&#146;t serve any real purpose, but tonally is at serious odds with everything that follows.

The main body of Treasure Island has the emotionally distanced minimalism of Eraserhead, and it tries to achieve some of the same hypnotic effects by letting the camera stare for an eternity at characters who simply return its gaze, or by having people repeat dialogue in never-ending loops. (Man 1, on his knees looking at Man 2&#146;s penis: "What&#146;s that?" Man 2, coyly: "What&#146;s what?" Repeat this ad infinitum, and by about the third time around you feel like screaming out, "It&#146;s his schlong, for God&#146;s sake!") In Eraserhead the static set-ups and Sphinx-like dialogue pulled the viewer into the film and magically created suspense out of nothing. But in King&#146;s hands the same effects lose this centripetal motion and become maddening; they&#146;re pieces in a cryptographic parlor game to which we never get the key.

Treasure Island is composed of a hundred separate inspirations that never fuse into a single one. We may wonder why we&#146;re given a view of a deadly riot that breaks out on VJ Day until we read that King wanted to show what he feels is the reality behind that famous photograph of the sailor kissing the woman in the street. What is such a banal &#150; not to mention suspect &#150; historical insight doing in a picture like this one? (It&#146;s not even much of a riot: it looks like the same ten or fifteen people running back and forth in front of the camera.) Even some individual flashes of inspiration, as when a letter we see being typed doesn&#146;t match up with the dictation being read aloud on the soundtrack, lose their luster by going on long after they&#146;ve made their point. Treasure Island is so caught up in its uneven whimsy that it&#146;s audience-proof.