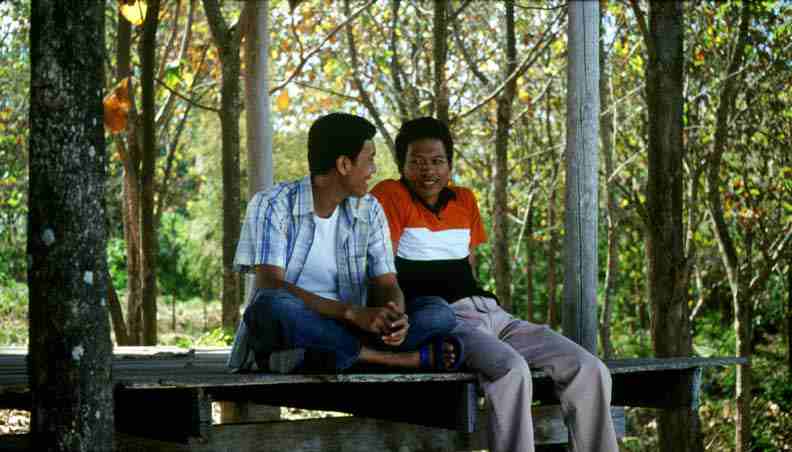 More spiritual conjurer than filmmaker, Thailand&#146;s Apichatpong (&#147;Joe&#148;) Weerasethakul has built an astonishing body of work in a short time. After graduating from Chicago&#146;s Art Institute, Weerasethakul returned to his home country and started a grass-roots filmmaking collective. His first feature, Mysterious Object at Noon, reflects this ground-up philosophy: it&#146;s an &#147;exquisite corpse&#148; experiment that weaves together elements of anthropological travelogue and fiction scenes in a way that&#146;s intriguingly messy. His next film, 2002&#146;s Blissfully Yours, continues his bemused formal playfulness, with opening credits that kick in at about the one-hour mark and excursions from the story that take the form of comments etched onto the film itself.

His latest film to receive (very limited) release in the states is Tropical Malady. Like his previous work, Malady is made up of disparate formal elements vying for control of the film. Split virtually down the middle, it melds a shy coming-of-age story of two young men&#151;one a Thai soldier&#151;falling in love, with some ferociously lyrical supernatural storytelling. Indeed, it would appear that the film&#146;s second half, in which a soldier has a moonlit tryst with a tiger shaman of Thai mythology, actually recapitulates the more straightforward story that precedes it.

If this sounds too precious by half, take heart. Weerasethakul&#146;s films inevitably suffer for description; they are sensual experiences written on celluloid. The actual pieces of the story pale in comparison to the rapturous, almost unsettling encounter one has with the film in real-time. Simply put, one would be hard-pressed to come across a similar experience in a darkened movie theater these days. At times puzzling, the film has a faux-amateurish quality that may be aggravated by Joe&#146;s apparent disregard for loose-end resolution. The best advice is not to get too caught up in the whys and hows of Keng and Tong&#146;s romance, since just at the moment of climax the screen goes black. From here on out, the film has shape-shifted into a truly mystifying collection of sights and sounds, as Keng trods a poorly lit path through the jungle, while being pursued by a phantom tiger. In the final instance, the lovers reunite on an astral plane that also connects the two halves of the film.

No less than Weerasethakul&#146;s previous features, Tropical Malady is a weird, gorgeous and disorienting act of exploration, in both the erotic and ethnographic senses of the word. One of the most remarkable aspects of the film, content-wise, is how candidly the director deals with homosexuality. The lack of hand wringing over the lead&#146;s same-sex relationship is of a piece with the film&#146;s offhanded formal experimentation. He views his native Thailand with a bracing subjectivity that obscures the boundaries of documentary-like objectivity. It may be asking too much of this elusive, affecting film for it all to make sense on a single viewing. The best advice is to just surrender willingly to its hushed reverie.