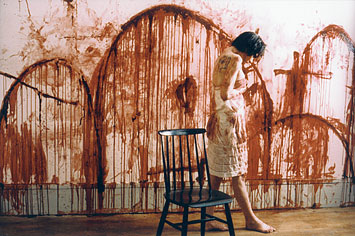 In Trouble Every Day director Clair Denis (Beau Travail, Chocolat) puts her always original and thoughtful stamp on the classic horror film genre. She combines elements of both the Frankenstein and Dracula mythologies and then puts a 21st century sheen on them. Her carefully worked out story plays slowly, creating suspense and a pervasive feeling of dread in the time-tested manner of step-by-step revelation, building powerfully as the disparate characters and events knit together.

Leo (Alex Descas) is a physician whose wife, Core (Beatrice Dalle), suffers from a strange disease of the brain. Leo was a research scientist who is now discredited for experiments he did in the past, experiments which led to his wife’s ailment. Now he is focused on finding a cure. Meanwhile, he medicates her and locks her up in the top floor bedroom of their large Parisian residence–which is being observed by a couple of young guys looking for trouble…

Shane (Vincent Gallo) is a newlywed American who once worked with Leo. He and his beautiful young wife, June (Tricia Vessey) travel to Paris for their honeymoon, but Shane responds strangely to his wife sexually and spends much time away from her, searching desperately for Leo.

With some of her plot elements, Denis leaves a deliberate ambiguity, impressionistically suggestive, rather than laying it all out like a Screenwriting 101 exercise. The ambiguity enhances the sense of mystery and eerie strangeness. With a minimum of dialogue, Trouble Every Day skillfully weaves both the elements of the plot and a powerfully evocative mood combining heated sexuality with a haunting sense of malaise. In most of the classic horror films there was some degree of tacit eroticism, but it was generally downplayed. Here elements of vampirism and cannibalism are inseparably connected with the overtly sexual in an explicit and graphic way. The camera repeatedly lingers in extreme closeup over bodies and body parts; the passionate sexuality of the key participantsis inextricably linked to the grotesque behaviors.

The classic Frankenstein theme (the audacious scientist dangerously venturing into unknown territory–Adam eating the apple) and the classic vampire theme of parasitic immortality are both invoked here. Denis also addresses the subject of love (as against passion). The love of these two men for their wives is the key motivator that both explains and propels the events that unfold. The image of Leo ever so gently cleaning the blood from his wife’s face is more telling than any conceivable dialogue for such a scene.

Denis uses a dark palette and saturated colors to enhance the ominous, claustrophobic mise en scene. Her frequent collaborator, cinematographer Agnes Godard, creates extraordinarily beautiful visuals here, as she did in Beau Travail. The score by Tindersticks is striking, moody, subtly sexy, rendered strangely eerie in the context of the film. And mention must be made of the sound effects which provide an unnerving fillip to the crucial grotesquerie of key scenes.

Not a great deal is demanded of the performers by Denis’ script and the acting throughout is serviceable. Some may, with legitimacy, find Vincent Gallo (Buffalo ’66) to be somewhat scruffy and overly deadpan in the focal role of Shane, but this bit of miscasting is not sufficiently serious to undermine the overall effectiveness of the film.

Trouble Every Day is not a film for every taste and readers are accordingly forewarned. Those who do see it will not soon forget it.