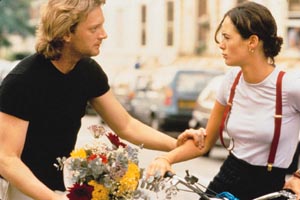 Maria Ripoll’s Twice Upon a Yesterday plays with time as does another excellent current film, Run, Lola, Run. Lola examines different outcomes of the same story told three times, with the action shifting by a matter of seconds in each version. In Twice Upon a Yesterday we see two disheartened lovers who are able to get an answer to the eternal breakup question: "What if I could have done things differently?"

Sylvia (Lena Headey), a psychologist, has been living with Victor (Douglas Henshall), an actor. He has cheated on her with Carol (Heather Weeks), another actor, and then told Sylvia about it. Sylvia kicks Victor out and takes up with Dave (Mark Strong), whom she meets on the rebound. She is now planning to marry Dave, which makes Victor, having seen the error of his ways, so miserable that he goes on a deep, boozy bender.

In the heart of his vodka-and-tonic-induced melancholy he ends up raging in a dumpster, where he encounters two Spanish visionaries, Rafael (Gustavo Salmeron) and Don Miguel (Eusebio Lazaro), lovers of that other Spanish visionary, Don Quijote. They claim to be able to rid Victor of the present ("Remove those things that do not fit in your saddlebag, senor"), and bring him back to yesterday, before he has told Sylvia about Carol. Victor sleeps, and when he awakens he is ecstatic to realize the spell has worked. It is yesterday again. He will now have another chance to make things right with Sylvia.

Or will he? Sylvia’s friend Alison (Charlotte Coleman) now takes up with the same Dave that Sylvia fell for the first time. Seeing that fate is conspiring to bring Dave to Sylvia, Victor tries desperately to keep them away from each other, but his efforts are in vain. Dave and Sylvia begin an illicit affair, and this time it is Sylvia who is forced to admit her deception to Victor. Poor Victor. Spell or no spell, he keeps ending up in the same place.

There is a lot more which we won’t tell, involving the extraordinary Luz (Penelope Cruz) and an interesting cameo by Elizabeth McGovern, playing a clairvoyant bartender. By film’s end, when Sylvia is miserable and returns to try to re-kindle things with Victor, it is too late. And, although we see the ending telegraphed a mile away, it still feels good to see Rafael and Don Miguel spot Sylvia as she sits crying on a park bench. Her knowing smile, as they tell her of their powers, makes us realize there are many other futures possible, to say nothing of many possible endings to films, if we only hold ourselves open to them.

Another current film with which Twice Upon a Yesterday will invariably be contrasted, is John Sayles’s Limbo. Both tell interesting stories, but whereas in Limbo Sayles chooses an artsy and abrupt non-ending, Ripoll prefers to take us a little further through the story-telling process. She suggests that perhaps life and love are not as clear-cut as we might think, and that there is such a thing as fate. Even with the help of every Spanish visionary in London, sometimes the knight gets the princess, but sometimes he just gets the shaft.