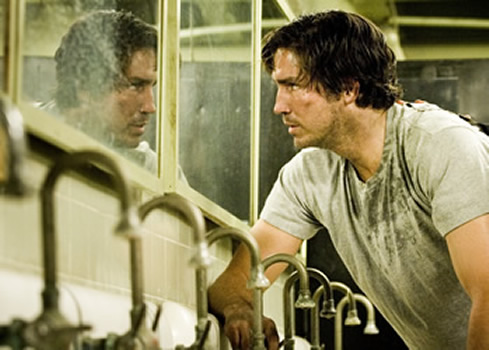 I would like to say up front that I’m not sure I understood the movie I am about to review. Maybe it’s because this is a dick flick and as a chick, there are certain things I will never understand about men. Therefore, whatever I think this movie is trying to say may just be a product of my estrogen-riddled brain. At least the title is understandable.

Now I love a good mystery thriller as much as the next man…or woman. But this movie wants to be more than just a brainteaser. It wants to be profound. It thinks it’s probing some deep philosophical terrain, about knowledge and experience, about the nature of good and evil. Are all men potentially bad? Who are we really? Are we born with our true natures, or does experience mold us? Can we really change who we are? And if we can, are we also able to change back? Did we really change or was it just the smell of a woman’s neck that made us think we could change?

So we start with five unconscious men locked up in an abandoned warehouse. Due to the magic of movies and chemicals in tanks that can accidentally seep out in dangerous quantities, these men have lost their memories. All they know when they wake up is that they’re bloodied from fighting, two of the men are tied up, one of whom has been shot. Who are the bad guys and who are the good guys? We can assume that Jim Caviezel, the lead amnesiac, is a good guy because he once was Jesus Christ. But wait. Maybe, just maybe he is not Jesus Christ this time, just like Greg Kinnear may not be…well, you never know with Kinnear. He may look like a straight-laced suburban dad, but his career choices make you think anything is possible.

We soon find out that two of the guys are wealthy corporate executives who are victims of a kidnapping. This is where the guessing game becomes completely surreal. “Unknown” wants to play with our preconceived notions, our cultural biases, our media-honed images of male stereotypes, so that the guys who look like thugs may turn out to be high-powered corporate executives, and the guys who look like….well, there are only two who look like they could pass as corporate execs, but they both act like thugs. In fact, the characters all act suspiciously alike most of the time. I wonder if that’s a conscious decision or just bad writing. I mean, maybe all men, when they lose their memories, become thuglike.

So what we have here is a mystery thriller that has somehow become a movie about men, or men who act like thugs. Men stripped down to the very essence of maleness. These men don’t look in the mirror and primp. They look in the mirror and retch. They keep their thoughts to themselves. They play their hands close to their chests. They sweat and swear and beat each other up. And then they realize they need each other to get out of the mess they’re in, and then, oh lordy, the male bonding begins. It’s the Dirty Dozen all over again.

Towards the middle of the movie, I stepped out of the narrative for a moment and found that I was deriving some visceral pleasure from watching these big, mean, sweaty, testosterone cases yelling at each other. Then I wondered if male viewers do the same. Then I wondered if I really knew men at all? Then I realized, THAT is what the film is about—the Unknown.

As for women, everybody knows we’re bad news, at least in the mystery genre. And as a woman, I don’t have a problem with you guys making my gender the propagator of evil. I loved “Double Indemnity” just as much as the next man…or woman. But if you’re going to go around blaming a woman for everything, the least you could do is give her character some depth, instead of making her into some cardboard cut-out you tack onto the ending just to tie up the mess you made.