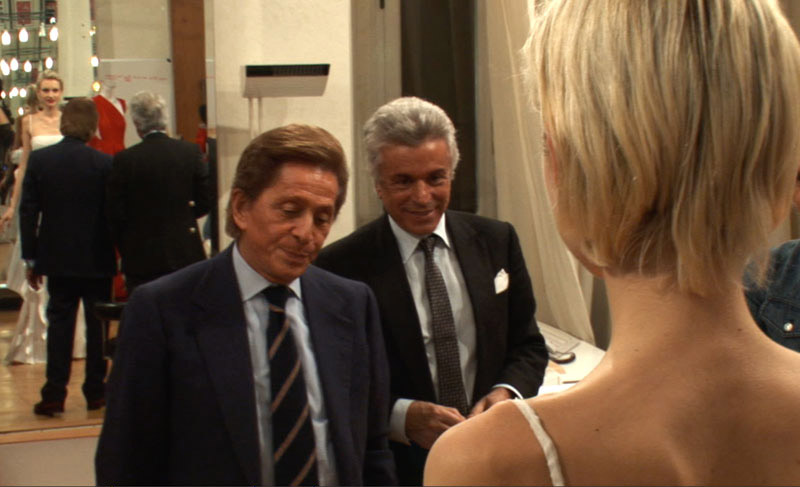 A documentary by Matt Tyrnauer

For almost a half century, the name Valentino has been synonymous with wealth, glamour and sartorial elegance at extravagant prices. The fashion designer Valentino Garavani courted, and was courted by, royalty and movie stars alike, and has famously dressed the likes of such fashion icons as Jackie Kennedy Onassis and Princess Diana, Madonna and Gwyneth Paltrow. In a move that was both largely expected and dramatically sudden, the legendary designer finally retired from the haute couture business in 2007, at the age of seventy-five. The two years preceding his retirement are documented with equal doses of intimate affection, fawning admiration and sardonic humor in the vastly entertaining documentary Valentino: The Last Emperor.

The film begins with Valentino showing what was to be his final Prêt-a-Porter collection in Paris, one of the film’s two catwalks that will placate those of us who can’t get enough of tall, fat-free beauties strutting around in gorgeous clothes. Then-poof! -suddenly we’re back in Rome with Valentino, watching him contemplate the number of ruffles that will grace the bottom half of one of his creations while working on the same collection in Rome.

These scenes where we get to watch Valentino in the process of creating a design, and to witness first-hand his spurts of imagination as well as his fits of doubt and anxiety over a creative decision he has made, are priceless moments of an artist at work. They are also windows into Valentino’s grand, imperious style, of both creating and living. He’s so good at what he does, and his seamstresses are so good at knowing what he wants, that it feels like all he has to do is make a sweep of his arm on a sketchpad and give pronouncements about color and texture, and the women scurry around a live, nude model with their needles and fabric, and voilå-a masterpiece. We get the distinct impression that Valentino is a genius at what he does-making beautiful dresses to make women look beautiful-and that what he does will be lost once he quits doing it.

The filmmaker, Matt Tyrnauer, was a correspondent for Vanity Fair, and I can only assume that the ease with which everyone acts in front of the camera must be due at least in part to an acceptance of him as one of their own. The film makes us feel privy to an otherwise closed milieu, a demi-monde of the rich and glamorous, and the artistes who cater to them, and who, in that role, have become royalty themselves. Valentino certainly lives the extravagant lifestyle of royalty, with his private jet that allows special seating compensation for his six pugs, a villa outside of Paris and another outside Rome, a chalet in Gstaadt, Switzerland where he unwinds by downhill skiing like a man half his age, and his Mediterranean-based yacht for….well…yachting. Mr. Tyrnauer is allowed access to all of this, except when Valentino petulantly turns to him and insists that he stop the camera; but of course, as would any well-intentioned documentary filmmaker, Tyrnauer dutifully lowers the lens and then surreptitiously continues filming. It feels almost like a game, where Tyrnauer is clearly the winner, although Valentino is not ignorant of the filmmaker’s role in recording his legacy for posterity.

Tyrnauer’s camera also introduces us to Giancarlo Giammetti, the brains behind the Valentino business enterprise. Valentino’s former lover and longtime friend and business associate, Mr. Giammetti was clearly instrumental in building Valentino’s design house into the multi-million dollar business it is today. The mutual respect and love the two men have for each other comes across in various exchanges between them, often humorous, mostly undemonstrative, and yet at times quite poignant. There’s a very funny scene where the two men disagree on exactly which café on the Via Veneto is the one where they met, two gay men young and gorgeous and ambitious in the 1960s, and seeing these two older gay men 45 years later exchanging catty remarks about whether it was the Café de Paris or the one next door reminds us of those rare relationships that seem to work in spite of difference. Theirs is a kind of union that is fueled by the unspoken understanding that one needs the other; that together, they are each more perfect. Of course, Giancarlo also hints that an ungodly amount of tolerance is also a key to their relationship’s longevity.

Still, the times are changing, and the men look a little worn out. The second half of Valentino: The Last Emperor goes into some detail about the evolving economics of high fashion, and the film takes some pains to make us believe that the current trend towards branding and the bottom line has conspired to make Valentino’s old-school commitment to high fashion and artisan workmanship obsolete. My guess is that Valentino and Giammetti had reached the end of their road, both physically and creatively, and were more than ready to call it quits. The intrusion of new marketing techniques may have precipitated Valentino’s retirement, but as we all know by now, looking at the shrinking ice cap of the Artic Circle, everything is finite. We may feel wistful towards the demise of one of the last powerful haute couturiers, but does it really make that much difference in the grand scheme of things? In this time of great economic distress, watching the twilight of Valentino’s enormous success, and the extravagant lifestyle it funded, doesn’t feel like it’s worth a lot of tears.

There will always be the desire for beautiful dresses, and there will always be young gay men to obsessively fill that desire. Maybe the next great designer won’t be an emperor, but does it matter? Just give him a penthouse, maybe two pugs instead of six, an annual ski pass, and a good pension. If it’s the end of an era, maybe that’s a good thing.