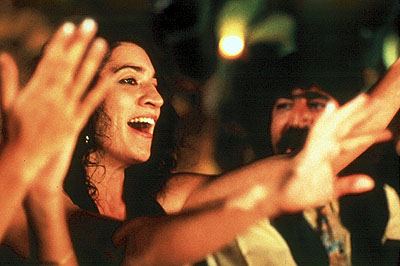 Director Tony Gatlif is a specialist in films about flamenco and gypsies. His 1996 documentary, Latcho Drom, traced the history of the gypsies and their music from their start in India through their migrations into Africa and Europe. His 1998 film, Gadjo Dilo, successfully integrated the music into a story about a non-gypsy living in a gypsy community. Vengo is placed in contemporary rural Andalusia and uses musical performances by flamenco stars in a drama about two families locked in a blood feud.

Caco (Antonio Canales), owner of a sleazy saloon, is in deep mourning for his daughter, Pepa, presumably a victim of the vendetta. His brother, Mario, killed a member of the Caravaca family, the opposing family in the feud, and has fled, leaving his palsied son, Diego, in Caco’s care. Caco makes an inept, though sincere, effort to make peace between the families, succeeding only in aggravating the conflict. Further tragedy is inevitable.

Gatlif’s plotting is minimal here, leaving open questions as to the origins of the vendetta and how Pepa died. The characterizations are thin as well. There’s little chance for Caco to develop beyond the deeply grieved father and loving uncle. Diego (Orestes Villasan) is charming in his youthful naivete and brave in his lack of self-consciousness. But little more is learned about these two central characters and the supporting roles are not fleshed out at all.

On the other hand, the music that Gatlif includes is irresistible. Anchored by percussive, syncopated rhythms, usually accompanied by clapping, the instruments include guitar, violin, flute, and mandolin. The flamenco singing style is minor key, often dissonant, always intensely passionate and delivered with a dry, hoarse tone. The songs are often laments and deal with the uprooted, transient life of the gypsies who are everywhere and belong nowhere, as well as the universal themes of love and loss.

The dancing is not the familiar flamenco dancing in period costume with rhythms stamped by wooden heeled shoes with nails on the toecap and heel. Rather, it is a freer, more spontaneous, seemingly improvised style that appears to be a contemporary interpretation that has evolved–this is, after all, a folk medium. The dancing is left almost entirely to the women.

There are some arresting visuals–a stark white church contrasted against a grey, lowering sky; three old women in black stirring whitewash (an allusion to Macbeth?); an elegant party laid out in a white tent, seemingly in the middle of nowhere.

But Gatlif has not succeeded in integrating a solid story and fully developed characters with the music at the heart of the film. As good as the music is, the overall film only suggests what a flamenco drama might be, leaving the viewer hungry for a more fulfilling realization of the concept.