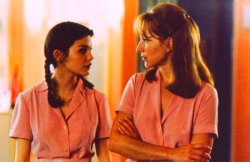 "Love," says Angele, a middle-aged beautician who works at a chic Parisian salon, "is just another form of slavery. It makes me sick and mean." As played by Nathalie Baye in Tonie Marshall’s Venus Beauty Institute, Angele is a character rarely seen in films: an aging woman who refuses the easy comforts of a relationship, preferring undemanding, transitory flings with men who have no expectations at all.

Angele comes by her distrust of love honestly. Her father killed her mother, suspecting infidelity, then killed himself when he realized that she’d actually been faithful. Angele herself then went on to disfigure her lover Jacques (Jacques Bonaffe) in a quarrel. Now that she’s "forty…no, older, but I look younger," she’s convinced herself that she wants nothing to do with commitment.

She’s fooling no one but herself. As the film opens, she flirts with a young lover in a cafe. She’s charming but edgy, dripping vulnerability as she tells him stories about her first boyfriend. He cuts her off to explain that he’ll be leaving her for good, and her coy front dissolves into rage. She chases him down the street as he skulks to his train, yelling insults and challenges at his back, furious at herself for falling for him. She’s followed out by an amiable bear of a man (Samuelle Bihan) who watches her scream, delighted by the spectacle. The film follows the course of their relationship as he moves from stalking her to introducing himself.

Most of Venus Beauty Institute takes place in the salon, where Angele spends her days making women feel better about themselves, listening patiently as they agonize over bad affairs and sagging bodies. These scenes are shot in the icy blues and pinks of the store’s neon sign, and Marshall allows them to drag on well after their narrative points are made. Their very length adds up; we begin to feel the extent to which these women have made a career of keeping up their looks.

Angele is surrounded by women whose own lives (a little too pointedly) reflect her own. The salon’s proprietor, Nadine (Bulle Ogier), is older than Angele and strictly independent. She believes that Angele is wasting herself as a minimum wage beautician and should be running a shop of her own. Two younger employees, Marie (Audrey Tatou) and Samantha (Mathilde Seigner), are beginning lives that echo the possibilities of Angele’s own situation. Marie, both beautiful and ingenuous, is becoming involved with a much older widower who’s been treated for severe facial burns. Samantha is already embittered, a failed nurse who recognizes at twenty that she’s blown her best opportunities.

The material in the salon is unusual – films rarely linger on the lives of aging working class women – but pat, with each life reflecting the other too easily. The film soars when it leaves the shop for Angele’s life outside. In several scenes, she tries to pick up strangers in restaurants. Her mix of bravado and desperation, candor and gamesmanship is dazzling: the men are left startled and a little scared by her intensity. Baye performs these scenes fearlessly, reveling in a character who’s unafraid to look both sordid and needy.

This is Baye’s second film this year that explores the sexual complications of an older woman’s life. Both this and An Affair of Love are interesting less for their accomplishments (they’re extremely thin movies, overwritten and underdramatized) than for what they attempt. And Baye is spectacular in each film. If she can ever manage to find a script that tackles this subject at the level she routinely reaches here, it will be an astonishing film.