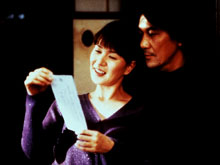 After seeing the comedy Warm Water Under a Red Bridge, the title itself becomes a joke. Coming from Shohei Imamura, now in his mid-70s, Warm Water is surprising for the film&#146;s juvenile primary conceit, a woman whose body swells up with water that comes exploding out when she has sex. Another explanation might be that those elderly with inadequate bladder control may simply identify better with such a condition.

Yosuke Sasano (Koji Yakusho) finds himself in search of a job after being laid off when the architectural firm employing him goes out of business. Plagued by a wife nagging him about money and his ability to provide for her and their son, Yosuke goes through a series of unsuccessful job interviews. After the death of his friend, Taro (Kazuo Kitamura), an old homeless &#147;philosopher,&#148; Yosuke recalls a conversation they once had about a valuable gold Buddha statue that Taro had stolen from a temple and Taro&#146;s request that Yosuke retrieve it to keep for himself. The statue was hidden in a house beside a red bridge in a small town on the coast of the Sea of Japan.

Yosuke, needing money, arrives at the house, and from a distance, he follows its resident, Saeko (Misa Shimizu), to the supermarket. There he spies this otherwise very proper-looking woman apparently urinating in the middle of an aisle while shoplifting. Saeko accidentally drops an earring, and Yosuke takes the opportunity to return it to her at the house where she lives with her senile grandmother, Mitsu (Mitsuko Baisho). Before he knows it, she is seducing him, and as they have sex, warm water spews forth from her body in a veritable flood that cascades down from the house into the river below.

Through sheer accident, Yosuke falls into a temporary job as a fisherman, and he decides to stay for a while as he becomes enamored of Saeko and the town&#146;s other eccentrics &#150; the bratty fisherman who hires him, the fisherman&#146;s exuberant girlfriend, an African student training for a marathon, an innkeeper whose cooking elicits disgust from her husband. Saeko explains that her condition makes her a kleptomaniac, and Yosuke makes a deal with her that he will help her &#147;relieve&#148; herself so long as she does not steal. Slowly, Yosuke discovers that he strikingly resembles someone from Saeko&#146;s past named Koji, who committed suicide. Koji was also a fisherman and Yosuke seems to be following in his footsteps. Why is Saeko called &#147;the monster&#148; by other townspeople, will Yosuke meet the same fate as Koji, will he acquire the gold Buddha, and just what was the late Taro&#146;s relationship with this house and its residents?

Those familiar with Imamura&#146;s 1997 Palme d&#146;Or winner The Eel (which also starred Yakusho and Shimizu) will find Imamura doing much of the same here &#150; crisp, clear direction at the service of a bizarre tone that supercedes concern with plot and character. Thus, Imamura fills the movie with small details that exist seemingly for the sake of the off-kilter atmosphere alone &#150; a broken doorbell, Saeko&#146;s offerings of cheese and ice cubes, Mitsu holding an umbrella over Yosuke while they are indoors, a stroll through an underground super-collider tunnel. Once revelations are made and the plot tidies up, the movie has a less-than-meets-the-eye feeling. Still, Warm Water has many surprisingly funny moments as well as some of quiet beauty. One particularly memorable scene has Yosuke in the fishing boat speeding home after the day&#146;s catch. Yosuke tosses up small fish to a cloud of gulls floating above and following the boat.

Koji Yakusho likely holds the current record for being in multiple foreign films shown in the United States. Before now, he was probably best known in the States for playing the gangster in Tampopo or the protagonist in Shall We Dance, but this year alone has seen him show up on American shores in Eureka, Cure, and Dora-heita (in the traveling Kon Ichikawa retrospective), and now here he is again in Warm Water Under a Red Bridge at the New York Film Festival.Yakusho certainly has the ability to play a great variety of roles convincingly, but his greatest asset is to make his characters feel firmly grounded in some way of life while being not quite settled or satisfied. His characters always display some weakness located in an emotion they cannot control. In Eureka, it was anxiety; in Cure, anger; and in Warm Water, insecurity about his place in a family and a community.