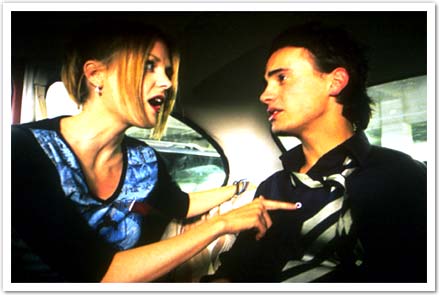 Waydowntown takes place in Calgary, where the downtown core of the city is a maze of pedestrian malls and offices, linked by tunnels and bridges; wide areas can be transversed without ever going outside, a sensible accommodation to the region’s long, severe winters. (The phenomenon is unique neither to Calgary nor to Canadian cities. Large cities in the U.S. and Europe often have such labyrinthine interior networks.) The lead character, Tom (Fab Fillipo), fantasizes the core city in a protective dome, rising from the earth, self-contained like an urban space ship. The metaphor for confinement within the corporate culture isn’t particularly subtle, but it will do.

Tom and three coworkers at Mather, Mather, and Mather have a bet to see who can stay inside the longest. It’s a somewhat flimsy premise for a plot, and the filmmakers appear to have known that–the bet mostly fades into the background while the film takes an often funny, satirical look at these young characters trapped (whether or not in a wager) in a world dominated by corporate mores, as stratified and demeaning as any primitive caste system–more so, perhaps, since it clothes itself in a veneer of community morality and respectability. That the octogenarian founder of the firm is a kleptomaniac is a genuinely funny touch, suggesting that corruption resides in the very fabric of the organization.

Tom is a mere trainee, and finds that even within the ranks of trainees there is a pecking order. He keeps an ant farm in his office, a microcosm of the human workers in their more expansive, but no less confining environment. He shares his tiny cubicle with Bradley (Don McKellar), a twenty-year veteran of the firm and a depressive taken to stapling office mottoes to his chest ("Don’t compromise–prioritize!"), playing video games about the first moon landing, and endlessly listening to music through earphones.

In the next office is Curt (Gordon Curries), a party to the wager who puts most of his efforts into seducing co-worker Vicki (Jennifer Clement) who doesn’t require a whole lot of convincing. The third participant in the bet is Sandra (Marya Delver) who gets spooked by Tom’s suggestions about the dangers of the recycled air in the enclosed environment; she spends most of the film following around the kleptomaniac boss to cover his thefts, while she sniffs away at a magazine perfume insert, as if that might save her from the contaminated air from which she seems about to suffocate.

Tom tries to make sense out of it all in a running voiceover. He smokes dope in his car in the garage, makes a play for a pickup at a pizza joint, and then has to cope with her schizoid delivery-boy boyfriend. Tom flies through the corridors, passing the smokers gathered in their outside spaces, getting involved in comical complications of his task of picking up a gift for the boss. And he starts to see over time that in this artificial and contained world, his behavior is becoming unattractively competitive, self-centered, even downright nasty. That he understands what is happening is his first step to salvation.

The script by James Martin and Gary Burns (who also directed) has enough quippy lines to keep things from bogging down; the observations of this social/economic/urban environment are canny and spiced with irony. The territory may be familiar, but the edge is fresh. Only on reflection afterwards comes the realization that what the business of Mather, Mather, and Mather is, is never mentioned.