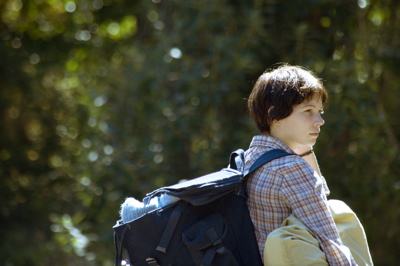 Kelly Reichardt’s Wendy and Lucy is one of a rare breed of arthouse films that manage to cross over into the mainstream with some amount of success. In pondering what gave this spare little indie such an advantage, we can immediately point to two of its attractions. One is Michelle Williams, a Hollywood star whose presence here is quite a coup for the director, and her incandescent performance as Wendy is a marvelous bonus. The second reason resides in the film’s other female lead, Wendy’s dog Lucy. A film about a girl and her dog—the very thought already makes the eyes well up. There’s nothing like the sentimental story of a girl and her dog that can pack them in, unless it’s a tearjerker about a lost dog, and the girl who refuses to give up looking for her. A little modernist minimalism may warm the always challenge-loving hearts of cinephilia’s elites, but the rest of us need a little Disney-like pathos to keep us glued to the screen.

I don’t mean to criticize the director for using conventional means to get her unconventional little film seen. These are tough times, as the film’s theme so eloquently reminds us, and I’m sure Kelly Reichardt knew if she pared her film down too much, if she kept her story to the car troubles a girl has while driving alone to Alaska with only $500 in her pocket, nobody would come. But add a dog, and make her Wendy’s only friend, and you’ve got something with an immediate emotional register.

And whatever distractions the casting of Michelle Williams causes—the main one being she’s too damn pretty to be so down on her luck—the actress’s celebrity draw makes up for. I confess that being an ardent fan of Miss Williams was what first compelled me to take notice of Reichardt’s film, and I happen to be a film reviewer who actually seeks out films that stretch the medium. Maybe Bruno Dumont can get away with casting plain-looking non-professionals in his films, but the European film industry is heavily subsidized, and I doubt box office receipts there are of such paramount importance.

Still, it was an odd sensation for me to be pulled into this spare little film by its dog and star, just as I was constantly being torn between aggravation and awe by its slow-as-molasses, minimalist style. Maybe it’s film school that has made me so callous, but when I saw Wendy and Lucy, I couldn’t help but recall with a certain eye-rolling recognition those days in my youth when we students joined the revolutionary vanguard that the 60s had spawned, and continued the struggle against the dominant ideology and the Hollywood entertainment industry that served it. We saw mainstream Hollywood movies politically as a ploy to keep the masses under control by spoon-feeding them fantasies that would placate them and keep restlessness at bay. (This was way before The Matrix.) For us film students, subversion was the goal, even if it meant boring the hell out of viewers in our attempts to deconstruct the narrative machine. We were going to create a new paradigm, and free ourselves from the oppression of the Hollywood elite. We watched Michael Snow’s Wavelength, and applauded its radicalism. We marveled at Chantal Ackerman’s Jeanne Dielman and its deconstructed narrative, its long takes and slow, careful emphasis on the mundane.

My days as a film student came back to haunt me in a wave of flashbacks when I saw Wendy and Lucy. It’s a perfect display of the experimental tendencies that we embraced in film school, and which I perhaps now too easily scorn (surely due in part to the kind of unfounded cynicism that comes with age). I wasn’t surprised to find out that Kelly Reichardt also has a lot of experimental shorts to her credit, as well as two fiercely independent, and highly praised, features, Old Joy and River of Grass. Wendy and Lucy is a faithful continuation of the experimental movement’s dogma: the minimalist style, a concentration on details at the periphery of the story, and a ponderous rhythm. There is no mistaking Kelly Reichardt’s politics as an artist. She evinces a radical’s bold refusal to rely on the Hollywood tricks that grab you by the throat and carry you to the end credits like a puppet. (You know the ones: musical scores heavy on the strings, or the ever more ubiquitous pop tunes; lots of shot/reverse shots between characters; crisp, fast-paced cutting).

Miss Reichardt is so true to her calling that at times she seems too rigorously committed to the avant-garde’s own “conventions.” The film at times even felt like a cliché of itself. There is very little dialogue, an excess of still shots of Wendy just sitting and looking morose; sometimes the movie feels flat, rhythmically dull, like a song with only one note. I was especially annoyed by an excruciatingly long dolly shot at the dog pound taken from Wendy’s perspective that passes by cage after cage of lost dogs. Or hearing Wendy humming on the soundtrack, the only “music” in the film.

And yet, despite my crankiness, I found Reichardt’s aesthetic choices quite powerful for the most part. For every slip into derivativeness, Reichardt makes up for it with some astonishing filmmaking. The close-ups of Wendy’s hands relinquishing her precious dollar bills when she pays a taxi driver has such power in its simplicity that I felt a tangible connection to Wendy’s sinking into impoverishment. When Wendy is caught shoplifting a can of dog food, she is taken to the police station to be booked on a misdemeanor charge. While there, she is fingerprinted not once, but twice, because the clerk was having trouble with the new digital equipment. The dogged redundancy of that act is a sharply political statement—subtle and yet strong, wordless and yet eloquent—about the cold treatment of individuals that underlies the bureaucratic structure of our social system. Reichardt is at the pulpit but she’s not ramming her politics down our throat. She gets under our skin, just as Wendy does to the security guard (Walter Dalton) who tries to help her find her dog.

There’s a horrendous scene towards the end of the movie that Reichardt refuses to milk for dramatic tension, and her decision has a chilling effect. While Wendy is sleeping in the woods, a hobo finds her and starts rummaging through her stuff. Reichardt’s camera remains focused on Wendy’s face frozen in fear, her voice barely able to contain her occasional whimpers as we listen to the schizophrenic’s delusional rant while he hovers over her. “Don’t look at me,” he yells at her, and we can’t help but think immediately of a psychopath’s admonition before he rapes and decapitates his victim. Wendy escapes physical harm, but in the next scene, shivering with pent-up shock in a gas station restroom, it is the money pouch wrapped around her midriff that she seeks out for comfort and assuagement. The act reminds us of Wendy’s predicament in all its bleakness; a rape would have been bad enough, but a robbery would have been the ultimate loss.

The movie has been praised for its expression of the economic tribulations of our time. In this year when recession is on everyone’s mind, Wendy and Lucy comes to us as a welcome spark of realism amid the action figure fantasies that keep us in the Matrix. For all its arthouse starkness, it packs a wallop. When you leave the theater, you might even take a bill out of you pocket and hand it to a street person on your way home.