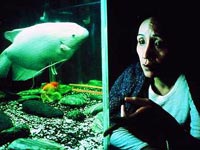 Like other Tsai Ming-Liang films, What Time Is It There? is tonally odd, light in dialogue, unconventional in its photographic beauty, sporadically opaque in theme, and resolute in not achieving resolution. Tsai&#146;s films are for the hardcore art film lover, which is not to say that they are pretentious, only that they require an open mind about the ways in which movies can operate. Lee Kang-Sheng, who has been in every Tsai feature, returns, as do Lu Yi-Ching, again playing his mother, and Miao Tien, again playing his father. While these actors have shared the same familial relationships and even inhabited the same apartment since Tsai&#146;s first film, Rebels of the Neon God, the movies are not sequels. Every one is like a slightly skewed alternate reality with the same faces and even names but with different, unrelated stories.

In this one, Hsiao Kang (which also happens to be Lee Kang-Sheng&#146;s nickname in real life) experiences his father&#146;s death. The film opens with a long continuous take of his father shouting his name and getting no response. Walking onto the apartment balcony in the deep recesses of Tsai&#146;s still frame, the father takes a smoke. In the next shot, he is ashes in an urn on Hsiao Kang&#146;s lap. Hsiao Kang goes through the Buddhist funeral ceremonies, then returns to work selling watches on the street. His mother does not take her husband&#146;s death as easily and is convinced he will return either in spirit or reincarnated. She admonishes Hsiao Kang for killing a cockroach that might now be her husband. In this hilarious scene, Tsai impressively gets a fish to hit its cue in a long take.

Shiang-Chyi (Chen Shiang-Chyi), about to leave for Paris, wants to buy a watch from Hsiao Kang, only it is his own watch. He reluctantly agrees and she, in addition to paying him, gives him a cake as a small present. Smitten with the encounter, Hsiao Kang begins resetting the watches and clocks in Taipei to Paris time. He also gains an interest in French movies and buys The 400 Blows. In Paris though, Shiang-Chyi is miserable. In a beautifully framed low-angle shot, she gradually descends on an enormous escalator while people rush past her. Every one in Paris is in a hurry except for her. Her beauty attracts the eyes of Parisian men in cafes and restaurants, but she pays them no mind. Jean-Pierre Leaud even gives her his phone number when they have a serendipitous encounter in a graveyard. Without giving anything away, Tsai ends his film on the image of a Ferris wheel. It is a powerful metaphor that could call forth the image of a clock or in accord with the more obvious intention, the cycle of life and death.

In many ways, writer-director Tsai Ming-Liang&#146;s appearance at the New York Film Festival and Hou Hsiao-Hsien&#146;s absence despite having a film (Millennium Mambo) available marks Tsai&#146;s ascendancy to being Taiwan&#146;s most prominent international filmmaker. (It would otherwise be Edward Yang if Yang had not put out only one film in the past 5 years, as great as Yi Yi is.) While Hou engages in ever more formal and proportionately more tedious stylistic experiments, Tsai has stuck to his usual idiosyncratic ways. That may sound staid, but his films really are variations on a theme, and what diverse, well-articulated variations they are. Tsai&#146;s movies have all related to his interest in generational alienation, urban ennui, and sexual frustration, but they have many assorted tones. What Time Is It There? manages to meet the dour seriousness of Vive L&#146;Amour and the witty comedy of The Hole in the middle.

What Time Is It There? marks Tsai&#146;s first time working without cinematographer Pen-Jung Liao, but his new director of photography, Frenchman Benoit Delhomme (The Scent of Green Papaya, When the Cat&#146;s Away) brings no less talent in enhancing Tsai&#146;s ability to express intimacy from a distance. Tsai&#146;s films are often bathed in a dark murkiness, and the way Delhomme&#146;s lighting reflects off of surfaces and people, it gives them a heightened impressionistic tactility. Tsai&#146;s framing elicits both emotional power and social commentary in his use of space. In a shot of the columbarium where Hsiao Kang places his father&#146;s ashes and has to bow in accord with Buddhist ritual, he is pressed into a narrow aisle with niches for the dead rising to high above his head. At once the shot communicates claustrophobic grief and the restrictedness of space in overpopulated modern Taipei.

The appearance of The 400 Blows is not coincidental as it is Tsai&#146;s favorite movie, and like Francois Truffaut with Jean-Pierre Leaud, Tsai uses the same actor over and over. While starting later in life than Leaud, Lee Kang-Sheng has also practically grown up on screen since 1992&#146;s Rebels of the Neon God. Here, Lee fruitfully performs in his usual natural, non-professional acting style. He is not quite as riveting as in the past, however, as he seems to have actually grown comfortable in front of the camera. His past uneasiness served Tsai&#146;s disengaged-youth themes very well. In a masturbation scene, Lu Yi-Ching shows even more uninhibited daring as an older woman than she did in The River. As usual, her character engages in over-the-top obsession with superstitious religious rites. Chen Shiang-Chyi has the toughest role as she has to convey credible emotional turmoil without the film supplying much understanding as to what is behind it until the very end. She is successful at giving despondence many tints. For Tsai devotees, look for actor Chen Chao-Jung who makes a cameo in the Paris subway.