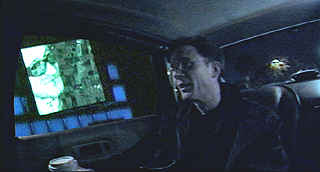 Science fiction author William Gibson is best known for 1984’s Neuromancer, a novel often credited with jump-starting the cyberpunk genre. Set in a virtual landscape of rapid-fire connections and published long before the World Wide Web extended its tentacles into your home and mine, Neuromancer quickly established Gibson as a visionary in certain circles (though the novel drew on many influences, from Raymond Chandler to William S. Burroughs to Philip K. Dick). Coining the phrase "cyberspace" cemented Gibson’s reputation, and a penchant for being reclusive didn’t hurt either.

In his new documentary on Gibson, No Maps for These Territories, director Mark Neale has loaded a limousine with digital video cameras and strapped his subject into the back seat for a whirlwind ride through millennial America. As Gibson ruminates on his life and work and pontificates about our rapidly changing times, Neale layers pertinent imagery and found footage over the author’s talking head to create a digital collage. He messes with the passing landscapes and street scenes we see through the limo’s windows, often speeding them up or adding pixilated images, presumably as a visual metaphor for the information superhighway or the accelerating pace of modern life. A New Age-y wash of techno music accentuates the road-to-nowhere vibe.

Gibson’s is not the only face we see. For some reason – perhaps because Neale designed the multimedia presentation for their Zoo TV Tour – U2 members Bono and The Edge are on hand to read from the author’s work and offer observations like "Neuromancer is a rock and roll book." Gibson’s fellow cyberpunk pioneer Bruce Sterling (Crystal Express, Heavy Weather) turns up as well, to offer some slightly more heady analysis.

The meat of the film, however, is Gibson talking about all things Gibson, and if you’re not on his wavelength – if phrases like "posthuman" and "postgeographical" make you go "postal" – you may begin to feel like a cab driver with a chatty passenger you just can’t seem to ditch. But for those interested in the issues he touches upon – everything from the future of technology to the pros and cons of drug use – No Maps for These Territories proves to be a diverting 88 minutes. Some of Gibson’s most interesting musings are autobiographical – describing the arrival of television in the form of an intermittent test pattern he would watch in awe-stricken anticipation of things to come, or telling his draft board that his ultimate ambition in life was to take every mind-altering substance known to man. He often comes off like one of the loopy denizens of Richard Linklater’s Slacker – at one point recalling the moment he heard that Michael Jackson had married Elvis Presley’s daughter and realized that his job of being a science fiction writer had just gotten more difficult.

No Maps for These Territories is finally a bit too long – Gibson’s observations eventually become as repetitive as the Matrix-through-my-limousine-window visuals. But for an hour at least, it’s an amusing ride through the fringes of post-something-or-other America.