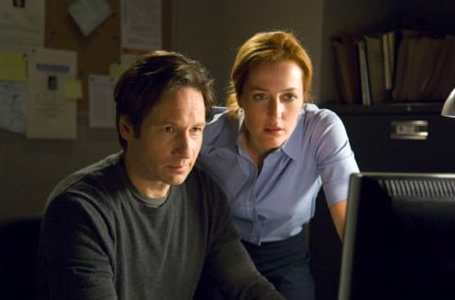 “The X-Files,” the cult hit TV series that wrapped up its run six years ago, was not only about paranormal phenomena, conspiracies between the corrupt power elite and alien invaders and the gender role reversal of FBI agents/ partners, Fox Mulder (David Duchovny) and Dana Scully (Gillian Anderson,) which was novel at the time—he was the intuitive one, going on instinct and sheer emotional intelligence and she the no nonsense, hard headed scientist — it was about mood, foreboding and a yearning and that couldn’t be soothed.

Director/co-writer and series creator Chris Carter, a former surfer who hit it big, has dispensed with all of the above in his decidedly earthbound movie version, “The X-Files: I Want to Believe,” a follow-up to the superior first installment, "Fight the Future,” released in 1998. Few new converts will be won over and, after the first blush of recognition fades, even avid followers of the franchise will be let down by this gruesome crime procedural. Forsaking the supernatural, extraterrestrial or any sense of wonder, it’s an ugly slog that borrows stock horror genre elements: the kidnapped woman in peril, dismemberment and a mad scientist in the Frankenstein mold. Even Duchovny, whose wry charm and hip ironic stance was a hallmark of the series, can’t save this turkey.

When the story opens, six years have passed and Mulder, now an agent in disgrace, is lured out of self-imposed exile by Scully who has left the bureau and returned to her medical career. Mulder has been invited by special agent Dakota Whitney (Amanda Peet) to pursue one last case he can’t refuse: a female FBI agent has disappeared without a trace and it’s not long before another woman goes missing and body parts are found buried in the snow.

Desperately in need of a shave and a new pair of glasses, Father Joe (Bill Connolly), a would-be, possibly fraudulent psychic who’s also a pedophile and defrocked priest, is aiding the investigation. Connolly looks as though he has parachuted in from a Monty Python skit and one wishes he had—where are those boys when we need them? They would have made savage parody of the ludicrous goings-on here. After being set upon by rabid dogs, Mulder eventually finds his way to the abducted women, whose body parts are being harvested at a nefarious lab straight out of 1950s sci-fi B-movie and the Cold War. (The evil scientists are Russians who don’t speak English and we don’t learn much about them.)

Gillian Anderson, a fine boned, intelligent actress who has been better other places, is slimmer and more glamorous than in her last appearance as Scully, a doctor/ forensic pathologist now dedicated to saving children. And, guess what? She’s a brain surgeon, too. She and Mulder aren’t married– there’s a hint of domesticity– but the sexual tension is gone. Seeing them as just another bickering couple with issues is a bore and kind of sad. The faith versus reason claptrap that has since resurfaced in other series such as “Lost” simply doesn’t resonate.

Despite a location designated as Somerset, West Virginia, apparently enduring the winter of the century, “X-Files” has no grounded sense of place. However, the coldness outside does seep onto the screen and what should have been an engaging reunion with old friends is unpleasant, rough-going. Mark Snow’s score, instantly recognizable to fans and used in a smart, funny moment as political commentary, is but a distant memory of a moment when the series was a potent reflection of the cultural zeitgeist.

On the production side, the sets are either antiseptic or grubby with the kind of dingy squalor favored by David Fincher; and, though there are scenes of jeopardy and pounding suspense, there’s little at stake. Carter’s film, which is not well-crafted in execution or structure, is visceral and sometimes revolting without being dramatic. The biggest mystery is how Mulder can walk around in a blizzard with his jacket open and not catch pneumonia.