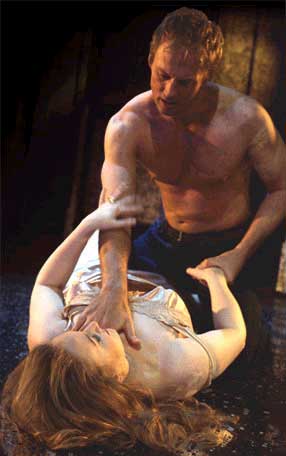 Our capsule review of the 1998 San Francisco

world premiere of the opera

If you relish opera influenced by composers Benjamin Britten and Samuel Barber that heavily features dissonant recitative over aria and that has lush jazz orchestration, A Streetcar Named Desire is the ticket to buy. The three-hour-and-fifteen-minute opera with music by Andre Previn and libretto by Philip Littell closely follows the Tennessee Williams play of the same name.

The story pitches southern gentility as represented by Blanche DuBois against salt-of-the-earth vulgarity as represented by Blanche&#146;s brother-in-law Stanley Kowalski. Blanche is a failed southern belle from Mississippi, who, having lost the family plantation, Belle Reve, through bankruptcy and a series of family deaths, shows up in New Orleans at her sister Stella&#146;s rundown apartment house. To get there she takes a series of streetcars with evocative names like Desire, Cemeteries, and Elysian Fields.

Blanche, who worked as a schoolteacher, is not lily white as her name suggests. After she insults and riles up Stanley, who thinks she owes Stella money from the sale of Belle Reve, Stanley finds out through an acquaintance that Blanche prostituted herself. He uses this information to stop his friend Mitch from marrying Blanche. Mounting sexual tension explodes when Stanley rapes Blanche.

In an effort to open the door to contemporary opera in the nation&#146;s capital, Washington National Opera has engaged key artists who have previously worked with other productions of Streetcar. Brad Dalton directs WNO&#146;s production based on his 2002 Austin Lyric Opera interpretation that adds a certain nightmare quality. This includes a staging concept that literally puts Blanche&#146;s ghosts on stage, such as her husband who committed suicide after she told him she saw him engage in a homosexual act.

WNO uses the angular and eye-catching sets created by Michael Yeargan for the Austin production. (Yeargan also created a revolving set for the 1998 world premiere of Streetcar by the San Francisco Opera.) Renee Fleming premiered as Blanche in the SFO production, with Susannah Glanville covering the last four performances. Here, once again, Glanville sings Blanche, an especially challenging assignment since Blanche is on stage most of time and one for which Glanville is fully equipped. To tie up the WNO production package, Andre Previn himself conducted the orchestra for the May 15 and18 performances.

Surprisingly, the vocal score for Streetcar does not organically mesh with the jazz-infused orchestration. The words by Tennessee Williams indicate jazz, blues, maybe tango–certainly music that is of the people, but that is not what Previn has written. Except for the lyric aria &#147;I can smell the sea air,&#148; Ms. Glanville&#146;s interpretation of Blanche&#146;s music seemed strident as if in anticipation of the final mad scene. Peggy Kriha Dye, as Stella, handily stole the show when she began humming lustily after having make-it-better sex with Stanley, who had previously hit her. Attempts at southern accents by both sopranos seem unnaturally superimposed. Unfortunately Previn&#146;s score for Stanley offered little opportunity for Teddy Tahu Rhodes to demonstrate his abilities. The most pleasing aspect of this opera production is the orchestral concert and it is in the orchestration where Previn shines as a composer.