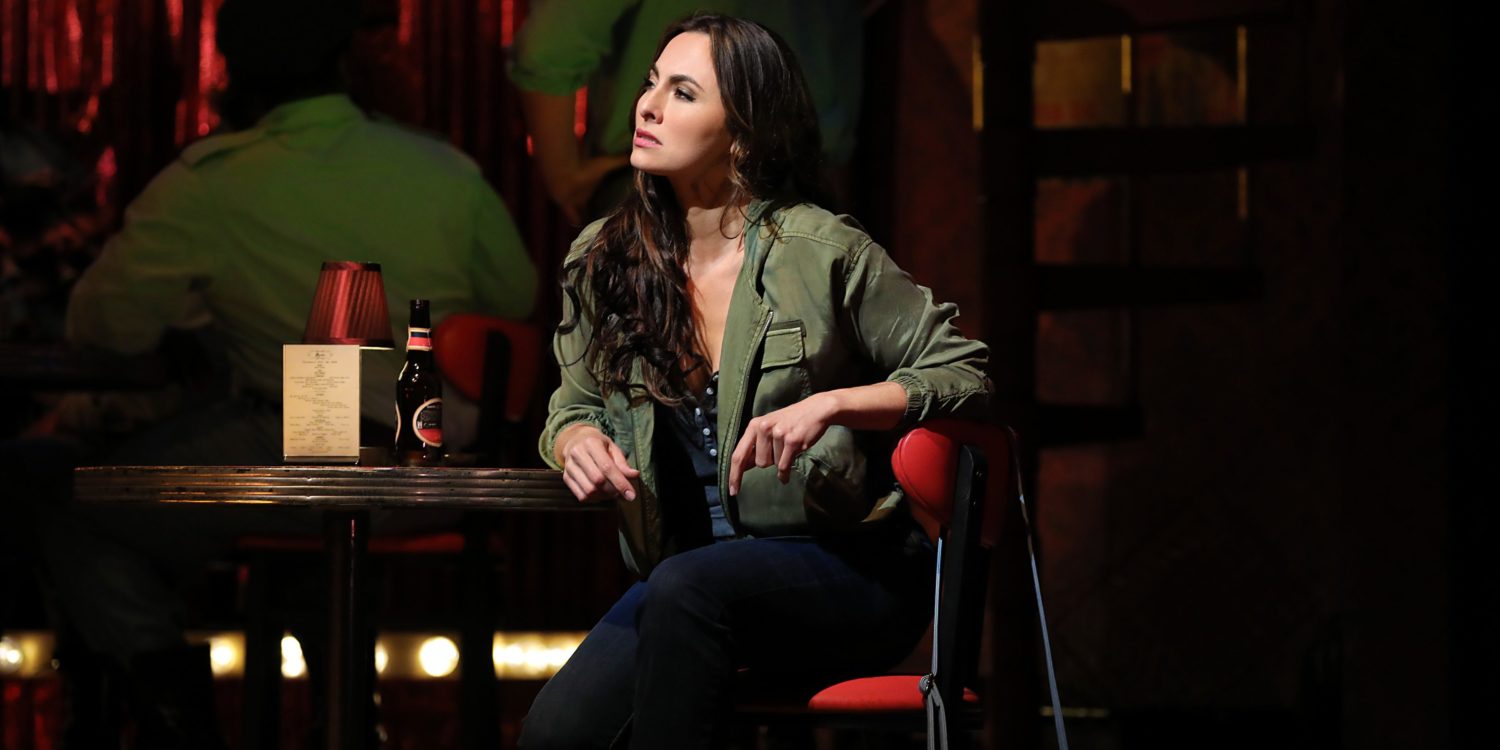 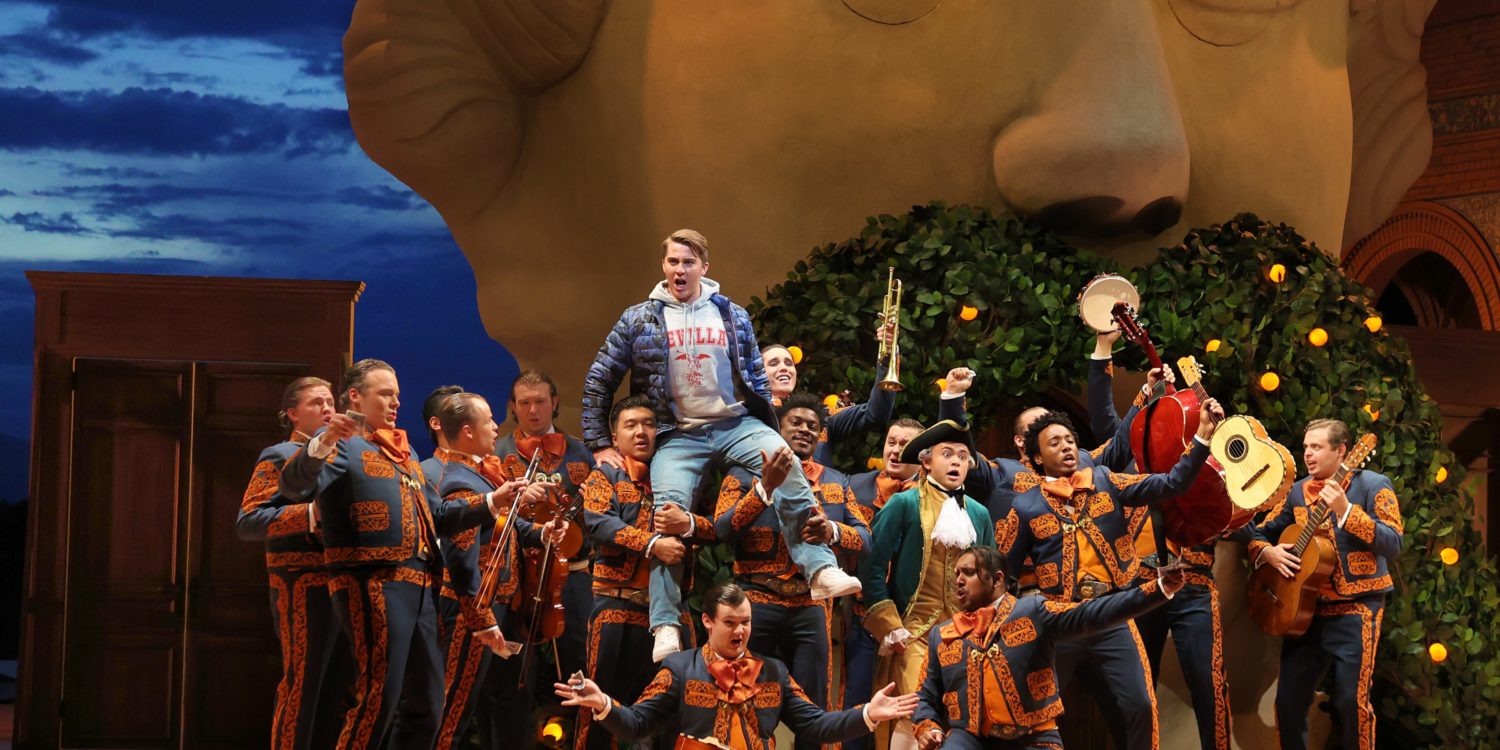 A Tale of Two Sevilles: “Carmen” and “Barber of Seville” at Santa Fe Opera

with Isabel Leonard as Carmen, Matthew White as Don José, Michael Sumuel as Escamillo and Sylvia D’Eramo as Micaëla

The Barber of Seville

with Jack Swanson as Count Almaviva, Emilly Fons as Rosin, Kevin Burdette as Doctor Bartolo and Joshua Hopkins as Figaro

Beyond setting, however, the two operas live in different eras and socio-economic statuses. They portray Seville and Spain at different angles. Bizet, the composer of Carmen, was a Frenchman born in 1838. He studied composition with Charles Gounod at the Paris Conservatoire at age 9. Gioachino Rossini, the composer of Barber of Seville, was born in Pesaro, Italy in 1792, He wrote nearly 40 operas but retired from music before the age of 40. “Carmen” is gypsies, soldiers, bullfighters and smugglers—all occupations on the lower end on the social strata. “Barber,” features a Count, a doctor, a wealthy ward, a gadabout barber and a hifalutin music teacher—all creatures of comfort. Carmen hangs out with smugglers; Rosina, the femme fatale in “Barber,” lives like a bird in a gilded cage, wearing fashionable gowns, taking bubble baths and music lessons, but not being allowed out of the house. The Barber is a local celebrity, Sevilla’s Andy of Mayberry with scissors. And this time Don José, in “Carmen,” has been reimagined in the era of “Me Too” as a villain who only gets to sing love arias because the music, anyway, is not up for grabs in this revisionist take.

Get over it, opera queens! Opera-goers who object to the way directors make their mark with changes in setting, time period and in “Carmen’s” case, even the heroic status of its leading man, are like the irksome originalist Supreme Court Justices who base their decisions on outdated social mores and Fundamentalist Christians who declare the everything they need can be found in debatably accurate ancient texts. One needn’t agree with every version of “Carmen,” or “Barber,” for that matter—but for opera to survive as a living art form, one needs to accede to the importance of new visions.

Musically, both productions are world class. Singers like Jack Swanson as the Count in “Barber” and both Isabel Leonard as Carmen and Matthew White as Don José are uniformly excellent. For most audience members, however, Santa Fe’s “Barber” will be much easier to take than the new “Carmen.” Mariame Clément, the French director of SFO’s “Carmen,” points, in the press, to the original novella by Prosper Mérimée, as her inspiration. In the novella, “Carmen” comes with a husband she cheats on, and a lover, Don José, who is later executed by garroting for the murder of both of them. Clément’s point: José is not a good guy—even if he misses his mother. Her other point, that Carmen is just trying to live her life, and that the opera is a story of femicide—may be more politically correct than accurate. Carmen has traditionally been portrayed as a fun-loving hussy. The novella character is painted more into a corner by life, by men, and by her own sense of self. In any case—Clément has created a revisionist Carmen. There is no red dress, no rose in her lips, and no flamenco. (Castinets, on the other hand, do make an appearance, an ironic sidenote.) The stage and costume design by Julia Hansen, include elements of an abandoned amusement park and drab outfits including a Micaela in overalls and a backpack.

Stephen Barlow, the director of “Barber,” is less politically correct, but veers his production in a comic direction that includes the display of a Gap shopping bag, a Count disguised in jeans , sweatshirt and a puffer jacket, a music teacher who delights in taking selfies on his cell-phone, and a Barber whose barber shop resembles a Disney musical. The whole affair has the bright colors and tight comic timing of Broadway—and offers clearly happy performers having fun on stage— as if they had been performing seven shows a week together for years. Kevin Burdette, as old Doctor Bartolo, is a genius at physical comedy. He can be counted on to chew-up the scenery in whichever role he has been given, but he does so here in the company of an entire batch of singer/actor/comedians who have been given full license to show their comic chops. It’s over-the-top in all the right ways.

In Clément’s “Carmen,” the leading role is played by Isabel Leonard, who has movie star looks and a burnished, expressive voice. She has also dived deeply into Clément’s world. Her Carmen makes a first entrance with an open book in her hand. Later she sits alone at a café table, letting the action swirl around her although it is clear that she is, and will be, forever at the center of this universe.

Importantly, or controversially, Clément has also invented a new character for this production. A little girl (in a miniature version of the red dress Carmen never dons) opens and closes the show, and appears in practically every scene. Played by Isla Burdette, she is the memory of Carmen as a little girl. If her presence, darting around the stage in lieu of traditional dancers, is sometimes off-putting, her stage presence is purely innocent and joyful, and the moments she physically connects with characters, especially Carmen, always create an impact. At the end, as she stands over Don José, just after he has (spoiler alert) murdered Carmen, her presence offers wordless, voiceless, but emotional resonance.