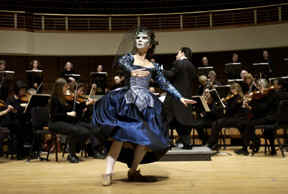 Jean-Baptiste Lully (1632-1687) composed Acis et Galatee to honor the Grand Dauphin, the son of Louis XIV. In the literary tradition of the day, the libretto, written by a minor playwright named Jean Galbert de Campistron, opens with direct address to the Dauphin and to his illustrious father known as the Sun King. However, the story of Acis et Galatee, Lully’s last opera of sixteen, concerns a tale from Ovid’s Metamorphoses. This opera ballet, quite popular in its day, was first produced in 1686 and continued to be part of operatic repertoire in Paris until 1762.

In collaboration with the Clarice Smith Performing Arts Center at the University of Maryland, Opera Lafayette, a ten-year-old early music group based in Washington, DC, presented an impeccable concert version of Acis et Galatee. This was the second time this now rarely produced pastorale hero�que opera was presented in the United States. Opera Lafayette premiered the work first in 2000 at the French Embassy in Washington, DC. Ryan Brown, Opera Lafayette’s artistic director and conductor for this production, has done extensive research on this opera and continues to use an old orchestral score that does not look like modern orchestral scores. The clefs and notes appear in unfamiliar formats. As conductor, Brown sculpted a balletic performance demonstrating his passion for the work.

The story of Acis et Galatee centers on a love triangle between the mortal shepherd Acis, the immortal sea nymph Galatee, and the fearsome Cyclops Polipheme (in English, Polyphemus). In Act I, Acis laments with his friend Teleme (Telemus) who shares the same problem of unrequited love. Acis cannot gain Galatee’s favor and similarly Teleme has the same problem with Scylla. By the end of Act I, Polipheme has dispersed all the mortals who run in fear for their lives but Polipheme declares that he is in love with Galatee and invites her to a party. Act II opens with the lovesick Acis telling Galatee that he shall end his life by fighting Polipheme. Galatee reveals that she loves the shepherd and does not want him to fight the Cyclops. At the party Polipheme proposes marriage to Galatee and she tells him he must ask her father. However, in Act III she has run off with Acis to the Temple of Juno where the lovers hope to ensure their future by making a sacrifice to Juno. Instead Polipheme finds them together and crushes Acis with a rock. Galatee summons the Nereid Thetis and the sea god Neptune to revive Acis. Neptune responds by bringing Acis back as a river.

Lyric tenor Howard Crook as Acis, soprano Ga�le Le Roi as Galatee, and bass-baritone Bernard Deletre as Polipheme presented outstanding interpretations of their respective roles both in vocal execution and emotional interpretation. Concert style presentations, by their format, limit theatrical movement that helps the audience to understand the characters. Both Crook and Le Roi were particularly expressive as Act II opened and the pair revealed the extent of their feelings for each other. Overall the quality of the nine principal singers and sixteen-member chorus was outstanding for its nuanced sound levels and its precise enunciation of the French text that was easy to follow in the printed libretto.

To add to the feast of the vocal and instrumental concert, The New York Baroque Dance Company under the artistic direction of Catherine Turocy performed in front of the orchestra wearing period-style costumes. The dance sequences, usually introduced by choral numbers, included minuet, tambourin, and folk ballet. What stood out in this performance was the fine balance between precision (i.e. the posture, the execution of steps, how the arms were held) and fluidity. Baroque dance includes ballet steps that modern audiences would recognize but often have a different execution. For example, modern ballet emphasizes steps done from a highly raised toe while baroque dance is more rooted to the ground and emphasizes steps with the heel slightly raised. Particularly notable was the dance of the Cyclops and his entourage, performed with stylistic movements evoking Thai dancers with bent arms and legs.

Despite the superior acoustics of the Dekelboum Concert Hall of the Clarice Smith Performing Arts Center, this kind of operatic work begs for an intimate theater with complete theatrical staging. It is remarkable that Opera Lafayette is willing to do a one-performance-only production given the amount of preparation such a production demands.