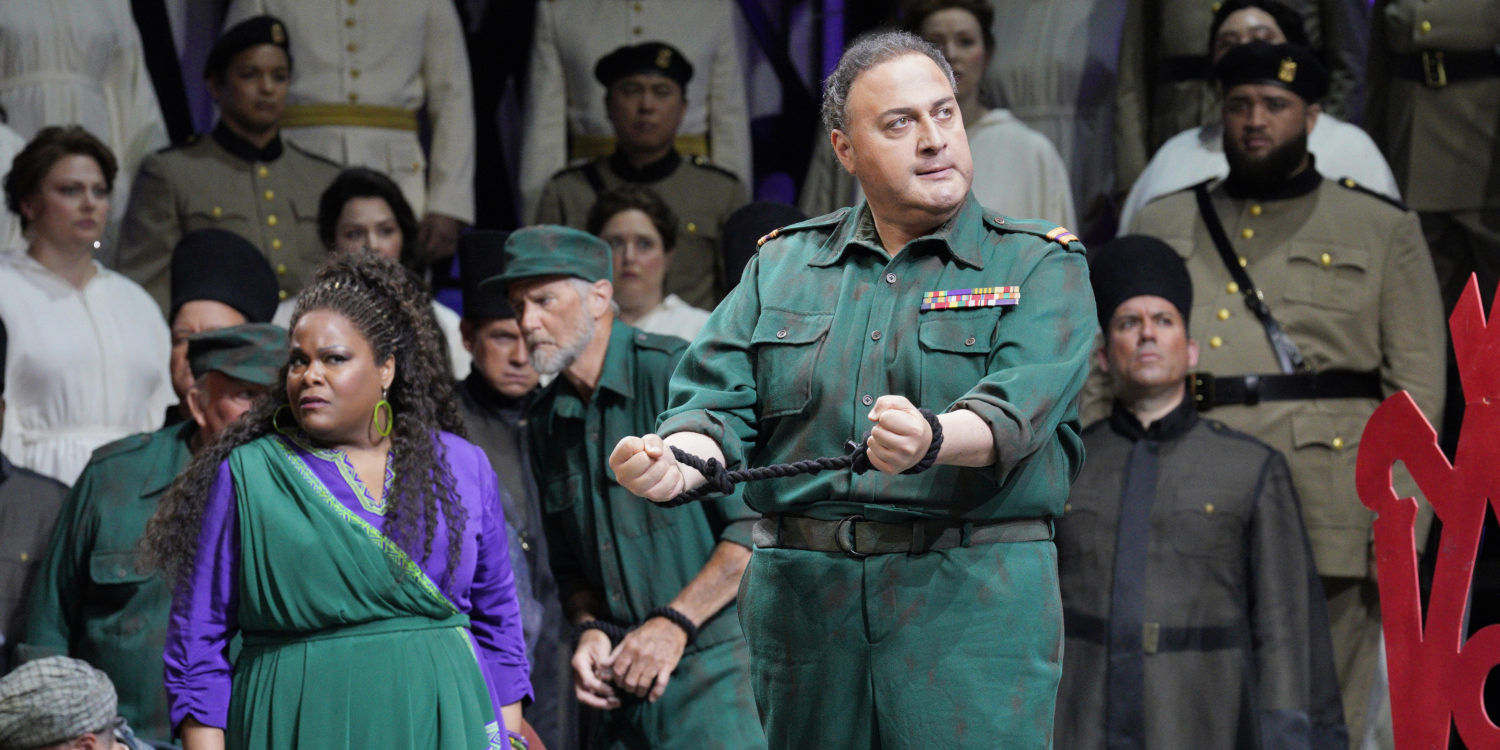 Looking for a true grand opera experience? You could not be blamed for expecting Aida to deliver the goods. You have no doubt heard about productions with horses on stage, even outdoor productions featuring elephants. Sorry to inform you that the closest the current LAOpera’s Aida will come to grandeur is a troop of aging boy scouts who pop off some handsprings and cartwheels.

In an interview included in the program, Director Francesca Zambello acknowledges that her production may not please some audiences, like me, who were looking for something more than layers of scrims created by a wealthy street artist who goes by the name RETNA. Examples of his work can be seen on several walls around West Hollywood near where I live. RETNA’s work is largely composed of made up hieroglyphics. They evoke something vaguely exotic and not terribly interesting after you have seen eight or ten of his efforts.

Zambello has taken the politically correct path and avoided any visual suggestion of Egypt, despite the fact that the libretto, as translated in the supertitles, has multiple mentions of Egypt. Why a pyramid or the suggestion of the Nile would be offensive escapes me, but I guess these are the times we live in. Typically productions of Aida are set in Egypt. Verdi himself was more focused on themes of love and jealousy played out against the grandeur of war between two nations. Visually this production is set in the land of somewhat impoverished exotica. The men’s costumes are vaguely early twentieth century. Even the chariot bearing the triumphant king is a wobbly affair hemmed in by hierographically adorned scrims. Saddest of all is the final scene where Radames has been sentenced to suffocate in a tomb and Aida has snuck in to join him. Not even a scrim defines confines of the tomb and the lovers are condemned to sing their duet sitting close together on a block on the vast empty stage of the Chandler. It does not make sense.

Better to focus on the magnificent score and some outstanding performances. Amneris (Melody Moore) is the daughter of the Egyptian king who has promised Radames (Russell Thomas) to her if he wins the war. Secretly her servant Aida (Latonia Moore) and Radames are lovers. Three guesses as to where this story is going. Thomas is a Radames worth fighting for and Melody Moore’s strong voice and stage presence convey both passion and jealousy. Sadly, at least in the opening night performance, Latonia Moore was not quite up to the task of Aida. Her voice lacked the strength necessary for the role and at times she seemed adrift on the stage. Hopefully she will shine in future performances. Bass Morris Robinson, the priest Ramfis, puts on the best performance of all. This former football player commands the stage musically as well as physically. Much has been made of Jessica Lang’s choreography. I found it adequate but hardly innovative. Of course the last LAOpera production was St. Mathew’s Passion and the choreography there is hard to beat.

Aida is Grant Gershon’s final production as Chorus Director. He will definitely be missed though he will be succeeded by Jeremy Frank who is currently the Associate Chorus Director. The strength of the LAOpera Chorus shines in this Aida.

As a general principle I do not object to changing the era in which an opera is set. It can breathe new life into old material. The recent Barry Kosky production of The Magic Flute which has been presented twice by the LAOpera is an excellent example. Aida has at times been called a war horse. War horses often earn this title because audiences love to hear them again and again. Breathing new life can be an excellent idea, but new life has to make sense. Sadly, I do not think this production of Aida makes it. Go for the music. Verdi does not disappoint.
Karen Weinstein