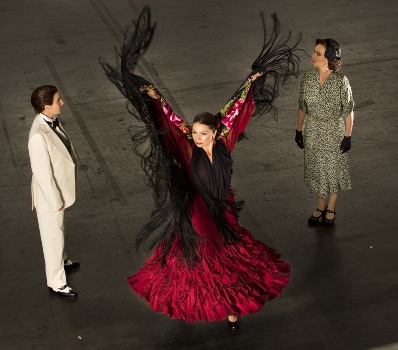 Ainadamar means “fountain of tears” in Arabic. Ainadamar is the name of the Spanish town in Granada where famed poet and playwright Federico García Lorca is believed to have died at the hands of Falangist assassins during the Spanish Civil War. He was 38 and, though the circumstances of his death and the location of his remains is a mystery, his legacy includes more than 15 plays — among them the famed “Blood Wedding” and “House of Bernarda Alba” — numerous books of poetry, an unfinished opera, composed with Manuel de Falla and a screenplay. Not to mention an iconic status as a symbol of freedom for the Spanish people.

“Ainadamar” also is the title of an opera by Argentinean composer Osvaldo Golijov, with a libretto by American playwright Henry David Hwang (“Chinglish,” “Golden Child,” “M. Butterfly”) who is no stranger to the operatic genre, having worked with the likes of Philip Glass and Bright Sheng and even with Elton John on “Aida.” What they have produced is a kind of memory piece, a dreamscape in three “images” and a prelude. It is a tale told through the eyes of Lorca’s possible lover, friend and muse, Margarita Xirgu, a young actress who was on tour in Cuba when Lorca was killed and subsequently banned from re-entering Spain. She continued performing his plays in Latin America until her death at 81; a theater is named after her in Buenos Aires.

Opera Parallele’s splendid mounting of this work stars Marnie Breckenridge as Margarita, with Lisa Chavez in the “pants role” of the poet Lorca. Maya Kherani is Nuria, a student of Margarita’s to whom she tells her story and, in a fortunate and inspired stroke of casting, flamenco singer Jesus Montoya plays Alonso, the bad guy, a role he created on the 2006 Grammy-winning Deutsche Grammophon recording of the work. They all were superb. With rave reviews coming out of Santa Fe Opera, Chicago’s Ravinia Festival and elsewhere, the scrappy little San Francisco company’s production had a lot to live up to, and it did not disappoint. The only unfortunate thing about this “Ainadamar” is its short run.

Golijov’s music is modern with a Spanish flavor. Hwang’s spare libretto (in Spanish, so I can only judge from the subtitles) is poetic, spare and entirely worthy of its subject, who wrote the famed “Lament on the Death of a Bullfighter” with its unforgettable refrain “A las cinco de la tarde” (At five in the afternoon). Stage pictures are stunning — tanks and the horses of war (Austin Forbord videos), children being torn from their mothers and, foremost, a fine quartet of flamenco dancers, led by La Tania, who also choreographed, who punctuate the scenes, lending visuals of anger or sorrow to the narrative.

“Las Niñas,” played by the young women and children of the San Francisco Girls Chorus, conducted by Laney Armstrong and Elizabeth Avakian, contribute hugely. Golijov wrote a good deal of music for the chorus and, dressed similarly but variously in white dresses that could be confirmation or wedding dresses with blood-tinged hems (costumes by Christine Crook) and carrying suitcases as if they were refugees from their own lives, the girls performed beautifully. Stony-faced, they wandered through the lobby and in and out of auditorium seats before the show, lending an eerie, other-worldly air to the proceedings before the curtain even came up.

The ending, which stirred up the dying Margarita with Spanish freedom symbol Mariana Pineda, the role she is playing, as well as the student who will follow her to carry on the Lorca legacy, was a little soupy for my taste, but still riveting because of the lovely music given to the chorus. Other musical highlights included a gorgeous trio for the three principal women near the beginning and a powerful men’s quartet of death and confession near the end. As well as every time Montoya, the flamenco singer, opened his mouth. Opera Parallèle’s Artistic Director Nicole Paiement conducted, and director Brian Staufenbiel kept all the various pieces of this powerful production in seamless synch. One only wishes more people could have seen and heard it.