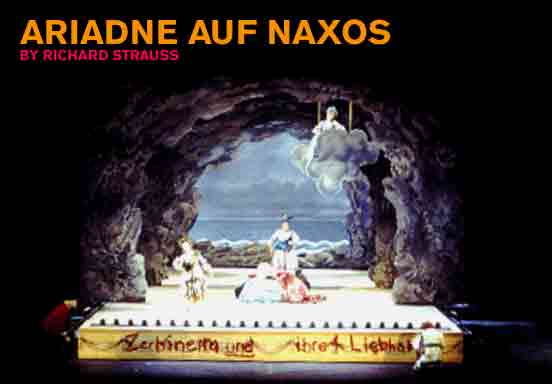 Ariadne auf Naxos is an underappreciated delight of an opera. While audiences understandably flock to Strauss’ earlier Der Rosenkavalier, they appear not to have taken Ariadne to their hearts, though it is shorter and pithier than the former and equally full of Strauss’ ravishing music. There are no less than three bravura soprano roles and Strauss’ superb orchestrations as well. Ariadne is also blessed with the wit and intelligence of Hugo von Hofmannsthal’s libretto which brilliantly confronts the seriousness of the composer’s art with the demands of patrons and popular entertainment.

The opera revels in the world of the theater. Located in the residence of a Viennese burgher, it begins backstage, with the auditorium seen in the distant background. In the foreground there is stage machinery and the hustle and bustle of performers, stagehands, and dressers who are preparing for a performance of an opera seria commissioned by the patron as an entertainment for his guests.

At the center of the prologue (performed as Act I) is the Composer (a trouser role for mezzo soprano), a serious young man who sings at one point, "Music is a sacred art which brings together all men of courage, like cherubim around a shining throne, and for this reason it is the most holy of the arts!" Such idealism is inevitably challenged; here it is the patron’s last minute decision first to have a Harlequinade (a light entertainment a la commedia dell’arte) follow the opera, then, because of the need to start the fireworks for his guests promptly at nine o’clock, to combine the opera with the Harlequinade. It is the composer’s nightmare: an insensitive compromise of his artby the power of the patron’s purse.

But the composer’s nightmare turns, in the Opera itself (performed as Act II), to the audience’s delight. The scene has been flipped 180 degrees, no longer seen from backstage, but as if the contemporary audience were the guests in 17th century Vienna. Ariadne, on a desert island, sings with grave seriousness, in music to match, of her misery–she has been abandoned by her lover, will have no other, and welcomes death as the only alternative. This music of lament is lush, with a long arching line that culminates rapturously as she awaits death: "You will set me free, give me to myself, this burdensome life, take it from me." It’s a showcase for a powerful soprano.

In the midst of this serious mournfulness enters the commedia troupe, comically commenting on the action of the opera in process. While the Ariadne opera is an easy target in all its overstated emotion and classical convention, it is, nonetheless music of stunning beauty. The audience is thus caught up in the paradox of thrilling to the admirable and elegant classicism even as it becomes the target of satirical fun. Zerbinetta, the star of the commedia troupe, performs a long, virtuosic aria, more in a bel canto style than in the somewhat Wagnerian music of Ariadne. In it, she comments on the elusive nature of love, the faithlessness of men, the life of many lovers, rather than just one.

The opera concludes with the arrival of Bacchus, not a messenger of death, but, quite the contrary, the god of wine and fertility. He and Ariadne close with an extended love duet.

San Francisco Opera’s current production comes from Lyric Opera of Chicago and admirably fits the scenic requirements; the shifting of scenes from backstage to front is handled with deft facility. With conductor Jun M�rkl bringing out the best of Strauss’ luminous score, the singers were fully up to the challenges before them. Claudia Mahnke, in her San Francisco Opera debut, brings a rich instrument and fine musicality to her sensitive interpretation of the composer. She exudes the appropriate idealism while retaining an underlying modesty to the character that works perfectly in context. Deborah Voigt, as Ariadne, is a world class singer in her prime, confidently delivering the glory of Strauss’ music as well as the humor in the backstage diva. Laura Claycomb’s Zerbinetta was a marvel of coloratura dexterity and accuracy, accompanied by a stage presence of witty charm.

Director John Cox, amongst other SFO assignments, is remembered for a stunning production of Capriccio, another work in which Strauss explores the nature of creativity in opera. He has knit the entire Ariadne production together seamlessly, bringing out the dichotomous nature of the theme with subtlety and finesse.