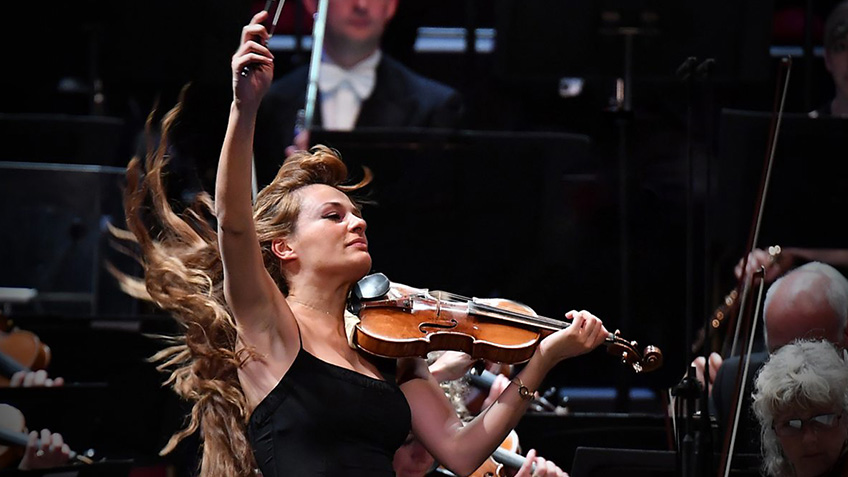 As a BBC Proms regular, Nicola Benedetti had the Royal Albert Hall’s attention all to herself when she performed to a packed auditorium on Tuesday night’s Proms 6. It was her time to shine with Shostakovich’s No. 1 Violin Concerto, which she recently recorded on disc, with works by Glazunov, that won critical acclaim. Speaking to BBC Radio 3, she talked about Shostakovich’s Violin Concerto like a dedicated student, equipped to perform the masterwork. She provided evidence of truly understanding the journey of the piece with deep reflection. ‘From the first movement, you have a stomach ache from beginning to the end. It’s just such relentless tension… And then, of course, the cadenza – the isolation is terrifying and grows to a frenzy…’

With her Stradivarius violin, she performed with veracity and a varied blend of colour and emotion. From start to finish, she uncovered the effort, grace and sensitivity required for any violinist attempting to perform the work, and it definitely didn’t seem straightforward. Shostakovich, himself, didn’t compose the concerto to entertain. Rather his aim was to educate and give a lesson, and a historical message, of the political upheaval in his own country in 1947. Stalin was determined to assert power into every aspect of life in the Soviet Union, including the arts, and for the most part, listeners sense the unsettling feelings; the sadness and internal violence Shostakovich faced, within the score’s writing. Naturally, the work was unheard of until Stalin died, a couple of years after Shostakovich had finished it.

Of course, our violinist Benedetti wasn’t alone. The BBC National Orchestra of Wales (BBC NOW) and Principal Conductor Thomas Søndergård informed the Royal Albert Hall of the wonderful music of Shostakovich, as well as Sibelius, this evening. This was the second of the two concerts the BBC NOW and Danish conductor were performing together at the Proms. Accompanied by Benedetti, the BBC NOW had sufficiently done well to work in tight synchronisation for Shostakovich’s Violin Concerto No. 2 that their performance made the work seem fresh and intriguing, still, as if we had never heard the work before. When Benedetti hit the end of the Passacaglia with her 6-minute long cadenza, which she said felt as long as a ‘lifetime’, she was a genuine marvel. Her stage performances are always worth watching out for; she closes her eyes, her long hair waves from side to side and her body clutches inwards as if she is giving way to beautiful notes telling complicated stories. Benedetti humbly exited the stage just after she performed a solo of Robert Burns’s Auld Lang Syne as ‘a little gift from Scotland.’

The BBC NOW first opened the concert with the rarely performed obligatory composition of Shostakovich’s ‘October’ written in 1967 to commemorate the 50th anniversary of the Russian Revolution. Designed to be a symphonic poem, it is fascinating to know that the work was neglected and is hardly performed. Sections of the work are reminiscent of his Symphony No. 10. Whether there are secret meanings here are unknown. For the BBC Proms, this was the first time it was performed, yet the BBC NOW and Søndergård, felt slightly held back. The opening horns and fanfares could have been louder and the strings could have been more sinister, in sound, however, this was a neatly done and kept at a safe range. I just hope I can hear October again in another concert, not hidden away as it has been for the past fifty years.

The final piece, that took up the second half of the evening, was Sibelius’s Symphony No. 2 and Søndergård seemed much more at home. As he had performed many of Sibelius’s symphonies, the conductor didn’t shy away from taking some liberties. When a revolution is what you hear in Shostakovich’s work, it is the sound of Finland that captures the work of Sibelius, in its entirety. Think about the mountains, the landscape, and the pastoral images of the green. Søndergård instilled his passion for the work by staying true to the score, keeping the music soft, delightful and romantic. In the same light, the music came more naturally for the BBC NOW. It was pleasing to see them perform a piece they felt much more familiar with.