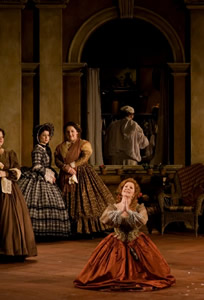 If Hector Berlioz had not wandered in to see Hamlet one night the world would not now be in possession of his uber-charmer Beatrice and Benedict, his opera-zation of William Shakespeare’s comedy Much Ado About Nothing. Houston Grand Opera’s recent production hit all the right notes in their clever staging of this rarely performed gem.

Berlioz put his orchestration chops to work with a lush overture, so nuanced in texture I momentarily felt surprised when the curtain went up. Indeed, this is one of the most performed opera overtures on the concert circuit. The libretto, adapted by the composer, cleverly streamlined Shakespeare’s comedy, editing out the subplots involving the villains, which kept the focus and tension on the chemistry between the would be lovers, Beatrice and Benedict. And what a chemistry it was between rising mezzo soprano star Joyce DiDonato and tenor Norman Reinhardt. DiDonato was full of sass, tender at choice moments, and a swooning young bride at the conclusion. Her physicality, combined with her vocal strength and powerful acting demonstrates where opera is heading. Reinhardt, dashing and witty, handled the role of Benedict with just the right amount of swagger and vulnerability. The bright-voiced Ailish Tynan was all sweetness and charm in her performance of the innocent Hero. Studio Alum Ryan McKinny and Liam Bonner delivered fine performances as Benedict’s buddies, Don Pedro and Claudio. The superb cast handled the spoken dialogue with great authority giving full weight to the bard’s most memorable prose

Somarone, loosely based on a flamboyant conductor of the day. Donald Maxwell (Somarone) peppered his mostly improvised remarks with political comments, which eased the pre-election jitters and amplified the comedic atmosphere.