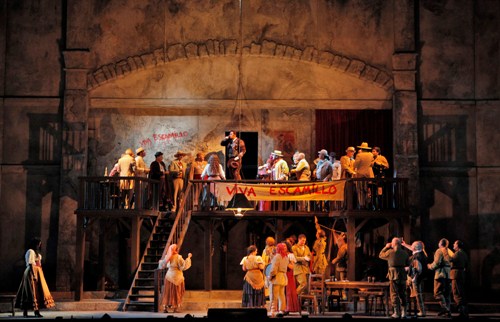 As warhorses go, Bizet’s “Carmen” runs with the best. According to Operabase, it’s the third most-often performed work in the repertoire. According to opera house ledgers, it’s money in the bank. The incarnation now on stage at San Francisco’s War Memorial Opera House hasn’t exactly thrown a shoe, but it’s a little tired. Jean-Pierre Ponnelle’s sets, nothing to rhapsodize over when they were new, are showing signs of age. Santa Barbara Opera artistic head José Maria Condemi’s direction leans to the static in Act I, as soldiers hang out in front of the barracks and cigarette girls come out from the factory on break, and to the ridiculous in Don José and Escamillo’s knife fight in Act III.

But, from the first moment that Anita Rachvelishvili sashays onstage in the title role, we are aware that we are in the presence of a thoroughbred. The Georgian mezzo (pictured, right), who shares the role with former Adler Fellow Kendall Gladen, has sung Carmen at La Scala, the Met, in Munich, Berlin, Verona and beyond. She comes to San Francisco straight from a triumph in “Adriana Lecouvreur” at Carnegie Hall. Rachvelishvili — who looks a little like a younger, slightly heftier, version of Cher — owns this role. Her lustrous tone and smoldering stage presence dominate every scene she’s in. In the opening act she looks like she could eat Don Jose for breakfast and, by the third, she effectively has.

Not to slight her leading man, Brazilian tenor Thiago Arancam. If a little wimpy in the beginning, he comes back from a brief jail stint a changed man. His voice even improves; his Act II “Flower Song” is well delivered and, by the distraught finale, he effectively holds his own against his beloved nemesis, the gypsy who has led him astray. Carmen’s new lover, the dashing bullfighter Escamillo, is sung by Tony-Award winner Paulo Szot (“South Pacific”). Szot brings his movie star good looks and a certain swagger to the role but not much else. Adler Fellow Sara Gartland is Micaela, Jose’s village sweetheart. She looks lovely and sings well but her voice has a little too much vibrato for my taste. Susannah Biller and Cybele Gouverneur were just right as Carmen’s friends and fellow-smugglers Frasquita and Mercedes but, in another example of misdirection, Wayne Tigges’ Capt. Zuniga is made to look like a Nazi in Act I and a drunken fool in Act II.

Nicola Luisotti drew some inspired playing from the orchestra, never so much as in the lovely, lyrical prelude to Act IV, and the chorus sang beautifully. But this “Carmen” puts its money on the leading lady and Rachvelishvili crosses the finish line way ahead of the pack. She is, quite simply, a revelation. She will sing the role only through Nov. 23, however, so hurry. I promise you won’t be sorry.