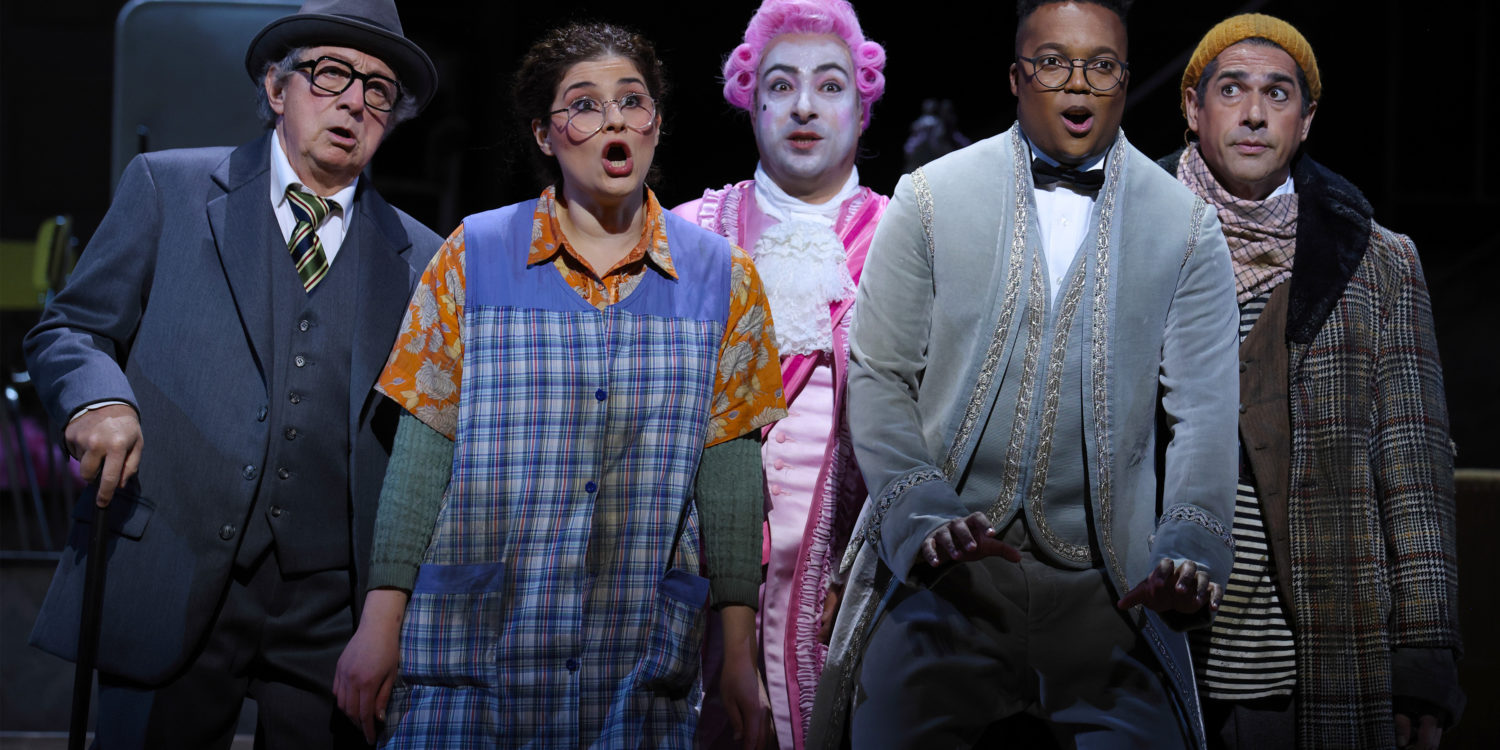 Rossini’s Cinderella is LAOpera’s holiday bon bon for this year. There is enough cotton candy on stage to give a diabetic pause, and yet, it is amazing how much can be consumed and still enjoyed. Do not expect a fairy godmother, a glass slipper, a pumpkin that magically turns into a carriage, or rats that transform into horses to pull the pumpkin-cum-carriage. This Cinderella does not sit by the fire; she eternally mops and dusts the faded abode of Don Magnifico, her stepfather, who has squandered her dowery on himself and his own two forever bickering daughters.

If this version seems to be missing some essential details you must know that the Western canon contains multiple versions of Cinderella ranging from Charles Perrault’s 1697 version, the Brothers Grimm 1812 tale, and the ultimate for modern generations, Disney’s 1950 animation. Going back through the centuries there are numerous other similar tales, as far back as the Egyptians and early Chinese.

The magic of Director Laurent Pelly’s Cinderella is in the scenery and the design of the production. The primarily pink set and costume design (Pelly again) straddle both the 20th and the 18th century. Don Magnifico’s not so magnificent villa is a rundown mid century mix complete with washing machine, fridge and stove. The various rooms are on pallets of different heights that slide back and forth keeping pace with the story. I found this touch a bit busy but a twelve-year-old whom I interviewed after the performance said she liked them because they “keep your attention,” and stop you from falling asleep.  You

cannot argue with such honesty.

The most delicious touches were elaborate cut out scrims of huge, elaborate antique clocks, armoires, and even a fanciful coach. All of which descended as the story demanded. Best of all, the all-male chorus not only wore whimsical footman costumes and wigs, but they were energetically  choreographed as they moved through Don Magnifico’s shabby abode. Grant Gershon’s LAOpera chorus is always a delight to hear, but who knew they could move with such grace and wit.

Clorinda (Erica Petrocelli) and Tisbe (Gabriela Flores), Cinderella’s stepsisters, are a tour de force of bickering adolescent mean girls only a ridiculously pompous father like Don Magnifico (Alessandro Corbelli) could love. Corbelli captures the stage in his bumbling posturing. My adolescent consultant found them most entertaining. The production as a whole is very well cast.

Rossini and his librettist tossed off Cinderella in three weeks. The result is filled with youthful energy and a wonderful score. Yes, it is a silly story, but told tongue in cheek it is delightful. The voices of Cinderella (Serena Malfi) and Don Ramiro (Levy Sekgapane) create harmony you can fall in love with yourself.

If I had a bone to pick it would be this: it is not unknown for operas to have some modern editing. If this is an opera to fill the holiday season’s tradition of cultural offerings for the whole family the three-hour format probably drags for most kids. Act I holds one’s attention completely; however, Act II’s saccharine resolution can seem to continue for an eternity. Yes, when all is said and done and Cinderella has her prince, she is the picture of graciousness to the family that has made her life miserable. The point is made early on, but the energy of the earlier production dissipates.

As cultural bon bons go, Rossini’s Cinderella is beautiful to listen to and the LAOpera’s production makes the most of the story. Rossini was known for farces and this version delivers.