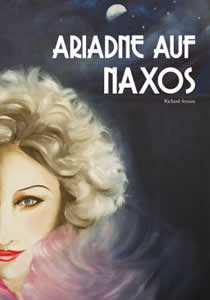 Viewed variously as an overblown sop to Wagner or a protean modernist hellbent on the destruction Opera itself, Richard Strauss created even more confusion in 1912 with Ariadne Auf Naxos. It followed the comparitively successful Der Rosenkavalier, a Mozartian comedy which had baffled the establishment by sheer force of its banality, especially after the gauntlet he had thrown with Salome and Elektra.

Ariadne Auf Naxos was even stranger, first glimpsed as a two-part show presenting Molière’s Le Bourgeois Gentilhomme with a new opera by Strauss and librettist Hugo von Hoftannstahl. This “pretty hybrid” (as Strauss himself called it) failed to inspire either theatre fans or opera lovers, and was reworked by composer and librettist for re-presentation in 1916. This version compressed the play into a prelude and was presented as a full opera (albeit a short one). The confusion doesn’t end there though.

Ariadne Auf Naxos is a self-reflexive mediation on music and art in which the staging of an opera called Ariadne Auf Naxos is both the subject and the object. The first half takes place ‘behind the stage’, the second half ‘on stage’. The plot involves the consternation caused by a wealthy patron who has commissioned two operatic entertainment’s for a dinner party. One opera is a serious Hellenistic/Wagnerian piece presenting the romance of Ariadne and Bacchus, the other a ragtag musical entertainment in the commedia dell’arte style.

A stony-faced household servant announces to the two troupes firstly that the Master requires both entertainment’s to be over before the 9pm fireworks display, then later causes complete chaos when he explains the Master wants both to be performed simultaneously. Neither troupe are pleased. The second half of the Opera is the result – a deliberate collision of musical styles in which the high art alternates with the low, but finds surprising common ground between them in the themes and emotions they both share.

There is an appealing intellectual interrogativeness to Ariadne Auf Naxos. It is not a passive entertainment, but not wholly radical either. Though it falls short of an act of deconstruction, it is a highly self-conscious piece of work that lends itself very well to appreciation by a postmodern audience. The musical score designed to confront and provoke, mixing dissonant modernism with crowd-pleasing song and dance, putting them in dialogue with one another rather than using one to completely critique the other.

Opera Ireland have paired Ariadne Auf Naxos with The Marriage of Figaro, and it is clear which is intended to support the other. Dieter Kaegi directs Ariadne with a fully developed eye for its relfexivities, and plays out not merely back and front stage, but from the side and to an angle. The action on Stefanie Pasterkamp’s set is literally tilted to an angle, giving the audience a side-on view of events as they unfold. The set also eventually gives way to a giant screen unfolded solemnly across the action at the finale and around which the cast move not merely to suggest front and back of stage, but a veil between spiritual planes. Walter Kobéra conducts Strauss’ challenging score without much delineation between the different musical voices, but enough has been built in to make the distinctions clear.

This production headlines Japanese Soprano Mari Moriya in the role of Zerbinetta, leader of the comic troupe. Moriya made significant waves in last season’s Turandot, and again demonstrates her clarity and versatility here, not least in the again deliberately indulgent musical gymnastics her character is given to perform during her key aria. No less significant are the voices of UK Soprano Alwyn Mellor as the Prima Donna/Ariadne and German Mezzo-soprano Kinga Dobay as the stressed-out composer whose opera is being vandalised. Mellor brings great feeling to her part, and this is vital to pulling of the balancing act Strauss has set his singers. If the music were to descend into outright parody, its heartfelt message of human connection and connectedness would be lost, and Mellor is able both to ‘play’ the singer and to actually sing with dignity. Dobay likewise sustains an important tone of masculine indignation in the light of the again deliberate gender confusion inherent in her ‘hosenrollen’ (female playing male). Kaegi hedges his bets slightly here, allowing a touch of ambiguity about pronouns and costuming to allow the backstage romance between the composer and Zerbinetta to enjoy a kinky lesbian vibe.

This is a thought-provoking production. It is not pleasurable in the strictest sense, though there are pleasures in its provocations. Not truly wild enough for shock nor quite sedate enough for toe-tapping, it represents a unique moment in Opera history worth appreciating, and is arguably a necessary correlative to Figaro.