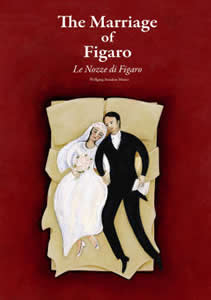 The Marriage of Figaro

The Marriage of Figaro is one of the easiest sells in Opera. Along with Carmen and The Magic Flute, you are pretty much guaranteed an audience when you open the doors. It has been called ‘the perfect opera’, and sounds like Mozart’s Greatest Hits in terms of the number of well-recognised, toe-tapping songs it contains. Its humour and warmth, its infectious score, and its now long-established reputation make it more or less impossible to miss with, and Opera Ireland’s current production certainly doesn’t. Clearly the engine of the Spring season, it is paired with the more challenging Ariadne Auf Naxos, but is being offered twice as many times.

The Marriage of Figaro wasn’t always the loveable puppy it now seems, nor indeed is it a puppy entirely bereft of teeth. It was based the controversial play by Pierre-Augustin de Beaumarchais banned by Mozart’s own patron, Emperor Joseph II. The play, a sequel to The Barber of Seville, was itself delayed in first performance by some years, and by the time it debuted in 1784, its lionisation of the quick witted servant over the strutting nobleman was more than just a little too close to home in pre-Revolutionary France. Mozart and regular librettist Lorenza Da Ponte softened its edges somewhat, enough at least to get it past Joseph II, but there is no mistaking the political message, even in a blunted form.

The basic plot concerns the efforts of affianced servants Fiagro and Susanna to head off the lustful advances of their master, the Count of Almaviva, towards the latter. Their means involve manipulating other illicit domestic romances, including that of Cherubino, the pageboy who is currently in love with the Countess herself, and of one Marcellina, a well-to-do lady with a signed contract from Figaro that if he does not repay a loan she has given him, he must marry her. There is much comical misadventure in the Opera Buffa style here, and with Mozart’s musical radar firmly tuned to slipping the satire past watchful eyes, this overturning of the social order and ridicule of the ruling classes is offered as a comedy of human folly rather than as a political tract.

It would be all too easy to produce The Marriage of Figaro on auto-pilot, so perfectly judged as it is. Mozart gives us perfectly placed, perfectly timed arias, duets, trios, quartets and more that match voice to voice, character to character in what seems like clockwork precision. Conductor Jari Hamalainen keeps this all moving crispy in this production, and the cast do well by it both alone and in concert. Though director Marc Adam doesn’t set out to radicalise things (there is a neat design conceit that has an initially totally white set become thematically ‘coloured’ through lighting and subtle costume changes, but it’s nothing wild), the production has the benefit of boasting some very strong performances from the cast, and this makes it more than just routine.

French Bass François Lis is a superb Figaro. He moves about the stage with lively deliberation reflecting Figaro’s limber mind and sings with absolute command. His rendering of Figaro’s angry aria “Aprite un po’quegli occhi” has real grit in it, but he is also able to bring sparkle and charm to bear when needed. Lis is ably matched by Italian Soprano Maria Carola as Susanna, and the two demonstrate genuine acting talent that carries the production a long way past the obvious. Italian Tenor Roberto Covatta makes a wonderful showing as Don Basilio, while Greek Mezzo-soprano Ana Agathonos makes the most of Cherubino’s showstealing “Voi Che Sapete”. There is also a touching “Dove sono i bei momenti” from Italian Sporano Daria Masiero as the Countess. Only Italian Baritone Marcello Lippi and UK Soprano Helen Field seem off the pace as Bartolo and Marcellina respectively, particularly in their first scene.

This is a sprightly production, directed by Marc Adam and re-staged by Pascale-Sabine Chevroton. There is plenty of movement on stage, including some farcical bits of business involving a cactus garden (cactuses also feature in Adam’s big finale where they serve as fairly blatant phalluses). Jean Bauer’s set is a suitably blank canvas for Thomas Maerker’s aforementioned lighting changes, but also gives plenty of scope for all of the movement and capering expected of the bed-hopping scenes. This all sits extremely sympathetically with Mozart’s music, and the result is a generally sense of bonhommie and pleasure that can’t be argued with: very much the loveable puppy.