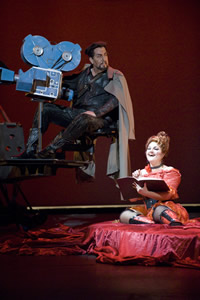 Robert Lepage can direct me an opera any old time. The famed French Canadian veteran of Cirque du Soleil and a whole lot more has re-conceived Stravinsky’s The Rake’s Progress, relocating it from the 18th Century London of the original Hogarth drawings to America in the ‘50s. And larger-than-life America at that – Texas, Hollywood and Las Vegas. Not only does the transfer work to convey the Faustian morality tale to contemporary audiences, but it enriches it.

Tom Rakewell, the innocent country lad who is corrupted by the Devil, the fleshpots of the big city and his own nature, turns into an aspiring young movie actor, his tempter, the sinister Nick Shadow, is alternately his agent, producer and cameraman.

Cinematic references abound. The first scene takes place under a big Texas sky a- la “Giant” and, in another bow to that film classic, the Devil (James Morris in a sly departure from his majestic Wotan persona) emerges, covered in oil, from an onstage drilling machine. Later, when the loyal Anne Trulove (Laura Aikin) goes looking for her missing Tom, the streets of Los Angeles unreel on a screen behind her red convertible as her scarf billows in the wind (video designs by Boris Firquet). Tom reaches the pinnacle of fame when he marries Baba the Turk, a bearded beauty who is the toast of the carnival circuit (the elegant Denyce Graves whose luscious mezzo is only matched by her gorgeous legs in a bathing suit). Their honeymoon carriage pulls up to a flashing movie marquee featuring – who else? – Themselves. Later, when Tom and Baba breakfast at home, the stage is dominated by a gigantic swimming pool (think “Sunset Boulevard”).

But this is an opera after all, folks, and the music is paramount. Stravinsky’s score is tonal and surprisingly melodic (for Stravinsky) and the fine ensemble of principals, the chorus and orchestra under the incomparable Donald Runnicles do it proud.

William Burden, in the title role, establishes his turf with his opening “Here I Stand,” actually standing a bit bowlegged like the cowboy he is supposed to be. Morris is by now almost the dean of world baritones and his Nick Shadow, a Mephistopheles in sport coat and saddle shoes, not only is menacing and well-sung but has a good measure of sly wit. Graves shines in her Act II aria of acquisition (an obvious jab at American materialism as is the subsequent auction of the ruined Rakewell’s property) and again as she counsels Anne to follow her heart. Aikin’s final lullaby, sung to the delusional Tom as he languishes in a madhouse (set in a pit, recalling the movie “The Snake Pit”) is a wonder of lyricism as is her lovely lament “No Word From Tom,” followed by the coloratura cabaletta “If Love Be Love.” Fine support is provided by Kevin Langan as Anne’s father and Steven Cole as the flamboyant auctioneer.

For all his scheming, Shadow doesn’t get Tom’s soul after all. He loses the card game on which he has gambled his prize but he takes the boy’s sanity in revenge. The “Bedlam Scene” at the end is affecting and sad, making Hogarth’s point that the wages of sin earn scant dividends. But the rest of the piece is riotously funny. Tom’s deflowering at the hands of a rapacious madam (Catherine Cook) includes a sight gag with a mattress that can only be seen, not described. As Shadow cranks his camera, an enormous blob rises from the stage to turn into his star’s trailer. (Tom, the star, is busy snorting coke on the floor). The fateful card game takes place in a ruined Las Vegas casino that turns into a macabre parody of the Strip and an apt metaphor for the entrance to Hell. Set designer Carl Fillion has outdone himself, along with lighting designer Etienne Boucher and costumer Francois Barbeau.

This production, which bowed recently in Brussels and Lyon, France, is a joint project with Brussels’ Theatre Royal de la Monnaie, Opera de Lyon, Covent Garden and Teatro Real in Madrid, as well as San Francisco Opera. This multi-collaboration is understandable because opera, especially one as lavish as this, doesn’t come cheap. But, over time, this production should prove as sound an investment as the iconic David Hockney version that preceded it. It’s a splendid theatrical achievement and deserves to rake in the rewards.