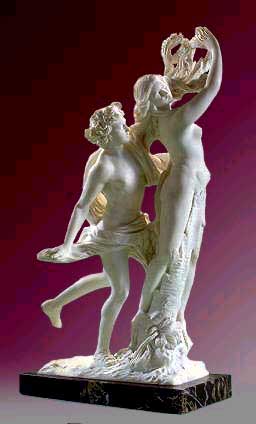 As always with Strauss, much can be made of the historical and political context of the time in which he wrote his operas. Daphne, after all, dates from 1937 when Strauss’ Germany was in the full throes of Nazism. (His original librettist for Daphne, the Jewish writer Stefan Zweig, backed away from the project prior to emigrating from Germany.)

But, drawn as it is from classical myth, Daphne can be fully enjoyed aside from the superimposition of political interpretation, a work of dramatic cogency and the blissfully shimmering vocal and orchestral music associated with the best of Strauss’ creativity.

Daphne, a young virgin, is the daughter of Gaea (here human, but named for the goddess of the earth) and Peneios (a fisherman, named for a river god) so her profound identification with nature is understandable. On the other hand, she resists the wooing of her long time friend, the shepherd Leukippos and she refuses to dress for the Dionysian festival. Subsequently, Leukippos puts on the dress intended for Daphne to inveigle her into a dance. The sun god, Apollo, arrives disguised as a herdsman; he, too woos Daphne, who is attracted to him but refuses to succumb. When Leukippos dances with the deceived Daphne, jealous Apollo dispatches a destructive thunderclap and reveals Leukippos’ deception as well as his own identity. Apollo shoots Leukippos with an arrow, killing him. Daphne’s grief (a transcendently moving aria), elicits regret in Apollo who has Zeus transform her into a laurel tree.

Thematically then, Daphne, all innocence and idealism, is brought under pressure from two sides–the pleasure-loving, lusty expression of Dionysus, as represented by the very human Leukippos, and the unrestrained power of the sun god who learns remorse and compassion from his encounter with Daphne. In the end, her metamorphosis into a laurel tree (source of wreaths for the honored) achieves, paradoxically, both her desired ideal of oneness with nature and relief from the duplicitous demands of lovers, both worldly and divine, while assuring her the eternal regeneration of nature. As with all myth, the listener is free to plumb whatever overlay of political or psychological meanings that the work evokes. One imagines Jungians in sheer ecstasy.

New York City Opera’s production of Daphne, designed by Ashley Martin-Davis, is dominated by a receding series of diaphanous scrims, vaguely butterfly shaped, forming a heart at the center. Imaginative lighting by Pat Collins brings color changes from pale oranges to greens and blues, effectively enhancing both the stage action and the mood. Daphne’s garden is front and center; birch trees grow to become targets for Apollo’s lightning. NYCO’s use of its rain equipment and water pits (which designers seem unable to resist) is fully appropriate here. The only glaring design error was the 1920’s striped bathing costume topped by a black overcoat worn by Peneios which seemed a forced connection and was not at all flattering to baritone John Avey. The trident he carries is sufficient to announce his fisherman’s vocation.

One cannot imagine a finer embodiment of Daphne than that delivered by American soprano Elizabeth Futral. Her beautifully modulated soprano instrument swells to fill the house with rich, rapturous sound without ever displaying the harsh edge that often accompanies such powerful projection. Poised and graceful, her stage presence and movement is consistently unforced, natural and in character.

Canadian Roger Honeywell was an ardent Leukippos with the ringing tones of a heldentenor. Swiss mezzo-soprano Ursula Ferri makes a dignified Gaea with an astounding vocal range, dropping down to rarely heard deep chest tones (a low E-flat!) while retaining a flowing, legato line. In anextension of the nature/tree metaphor, she sings "Daughter you are a new branch borne of me; the blooming of the branch is my concern." It’s a lovely affirmation by an Earth Mother, but stage director Stephen Lawless would do well to omit the literal watering of Daphne by Gaea that follows.

(40442)
$9.98 (as of January 22, 2021 - More infoProduct prices and availability are accurate as of the date/time indicated and are subject to change. Any price and availability information displayed on [relevant Amazon Site(s), as applicable] at the time of purchase will apply to the purchase of this product.)