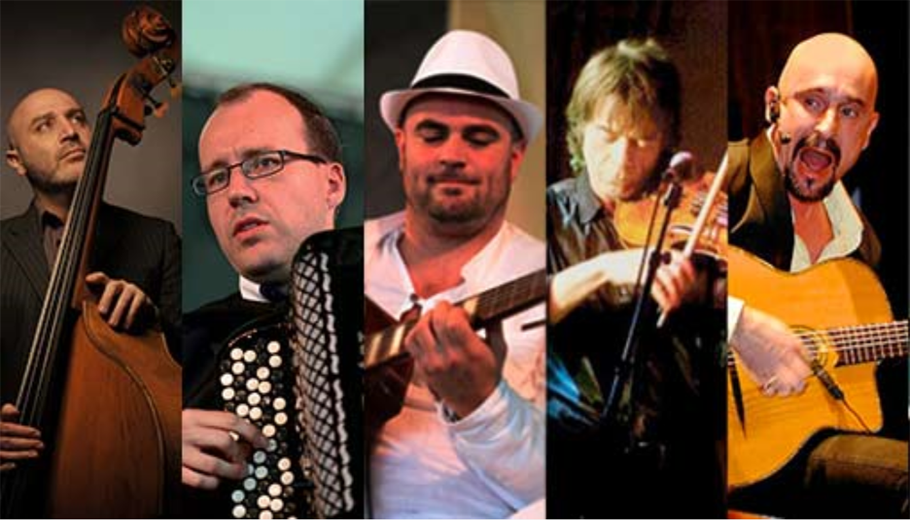 The Django Festival AllStars is currently back on tour in the US, and in Philadelphia on November 6 for a dynamic one-nighter in the Perelman Theater playing to a crowd of avid fans. Their 90-minute set proved once again that they are the keepers of the flame of the indelible jazz artistry and legacy of guitarist Django Reinhardt and violinist Stephan Grappelli,

Reinhardt and Grappelli made more than musical history as Europe’s groundbreaking jazz band Hot Club Quintet in Paris. When the Germans barred jazz as ‘decadent,’ the band was so popular in France, they weren’t shut down, and in some in the band were even part of the French resistance.

This many years later, the music is still hot and The Festival AllStars – accordionist Ludovic Beier,  Lead guitarist Samson Schmitt, violinist Pierre Blanchard, Bassist Antonio Liousati, and rhythmic guitarist Philippe Cuillerier- are all virtuoso soloists, together they are joyously a musical band of brothers. Their repertoire includes Reinhardt classics, but mostly they performed their own contemporary compositions which fuse the style of  French folkloric, gypsy and American jazz styles. .

The freewheeling 90-minute set of a dozen tunes was kicked off with Samson Schmitt’s flamenco laced guitar solo to ‘Attitude Manouche’ with each player following suit with their own solos.

Next, the band prompted the audience to clap rhythmically to ‘Troublant Romeo’ composed by Pierre Blanchard, as ignited by Ludovic Beier’s rollicking accordion dancing around Schmitt’s steely riffs, then Blanchard taking the floor with a blazing violin lead. Later in the concert, Blanchard’s ‘Nocturne’ starts with a discordant, edgy opening with echoes of Janacek that melt into gorgeous French lyrical lines. Then he flies into a rousing ‘Balkanic Dance.’

Ludovic Beier’s composition ‘Late  Train’ starts off as a 20s era foxtrot orchestral before it careens into rollicking big-band swing number. Beier’s hands dancing so fluidly over the dual keyboards of his accordion that one can get transfixed by his precision.

The tune ‘Dorado’s Smile’ is a soulful homage to Dorado Schmitt, who is Samson’s father’s cousin. Dorado guitarist/composer who teamed up with  Babik Reinhardt (Django’s son) which led to the formation of the AllStars.

‘Carnegie Hall’ is a comedy number by Philippe Cuillerier’s that was inspired by the panic he experienced the first time he performed in that storied temple of classical music. Cuillerier barks out the lyrics that expose the limits of his voice, but then midway through he starts scat-singing and his voice lands with an impressive range- a combination of bari-tenor growls, feral phrases, and pure manic vocal invention- which blew the roof off to the obvious delight of this audience.

The All-Stars musicians, but it is their immediacy and camaraderie that builds each concert into a musical occasion, and this night, it was greeted with lusty applause throughout from their many Philly fans.