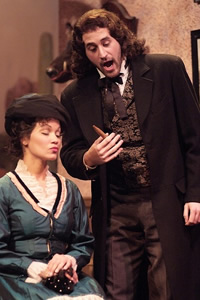 Opera director David Gately’s Wild West version of Donizetti’s ‘Don Pasquale’ is simply inspired artistically and completes infectious fun. The setting moves from an Italian estate to an old west saloon-bordello in Arizona. Who can resist the charms of Zulimar Lopez-Hernandez’s Norina (aka ‘Sofronia’), whether she’s working a prairie skirt, opera gown or holstered corset. She can handle high Cs and High Noon as cool as Clint, proving there‘s nothing quite like a gun slinging soprano.

She certainly knows how to handle Don Pasquale, the dusty dude who thinks he can control her, if not the domestic mayhem. Steven LaBrie ignites this farce as Dottor Malatesta by setting up the Don, pronouncing his 70-year-old carcass robust enough to marry. He kicks his lay about nephew Ernesto out to make room for the feminine touch.

Tenor Joseph Demarest plays Ernesto with casual swagger and comic flair. Sitting in a bubble bath with his boots hanging over the sides, attended by three frontier whores, he howls his laments as his back is scrubbed and slugs down whiskey. The tenor has great instant chemistry with Hernandez, crucial since they constantly steal away for mini-love scenes and arias.

In his white sagebrush wig and Rhett coat, bass-baritone Ryan Kuster, reminds you of Harvey Korman, but shtick aside, he ain‘t skippin’ any technical notes. He may be singing his loneliness to his stuffed possum instead of his new bride, he does it in great voice. LaBrie is matinee handsome and quick on the draw vocally. As is Lopez-Hernandez, who can win your heart with fake tears and genuine heart. When that fails, she has a sonic boom that hilariously freezes everybody. .

Set Designer Peter Harrison has a flip set of saloon, boudoir and den with music hall pop and costume designer Val Starr is particularly witty with cowboy and bordello drag. Gately keeps the movement screwball and the cast bubbly. Equally effervescent is AVA orchestra and conductor Richard A. Raub’s skill at keeping the detailing and punch in Donezetti.

The orchestration was so airy in and out of those comic trio and quartet song cycles. Tricky roulade runs are made stoogy and ariatic deadpans add comic magic. Kuster and LaBrie even get an encore built in when a set isn’t deliberately quite ready to go. The Mariachi tableau in the desert moonlight in act III doesn’t end up in a showdown, but a delicious spaghetti western dinner with operatic gravy to spill.