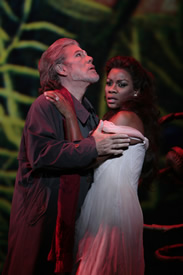 Blood is the image that dominates Duke Bluebeard’s Castle, a one-act opera written by composer Bela Bartk with libretto in Hungarian by Bela Balazs. Washington National Opera, under the direction of film director William Friedkin (best known for his film The Exorcist), has produced this engrossing but terror-filled work with two prominent singers: bass Samuel Ramey as Duke Bluebeard and mezzo-soprano Denyce Graves as the Duke’s fourth wife Judith.

Based loosely on the fairy tale ‘Barbe Bleue’ by French poet Charles Perrault (1628-1703), Duke Bluebeard’s Castle, which had its world premiere in 1918 by the Budapest Opera, tells the story of a serial killer who has just eloped with his fourth wife and brought her home to his dark castle. His new wife Judith wants to know what is behind his seven locked doors and she wants light brought into her new home. Reluctantly the Duke allows her to open door after door until the seventh door. Behind these doors are his torture chamber, armory, treasury of jewelry and gold, a secret garden with abnormally large flowers, a panoramic view of his land, and a lake of tears. Judith realizes what is behind the last door, but cannot help herself from wanting to know the entire truth about her new husband.

The opera, which runs just under one hour, is a psychological study about unavoidable fate. The music is brooding and often set in a sharp register, but it is also majestic in the way brass announces the coming of royalty. Ramey’s bass voice sounded cold and suitably gravelly against the warm and voluptuous tones of Denyce Graves.

In this production, which had its premiere in 2002 at the Los Angeles Opera, a man (actor Neno Pervan) standing on an unseen platform high above the stage (is he a vampire with supernatural powers?), introduces the story in spoken voice. The text is in doggerel verse. As the narrator finishes what he has to say, he drops a red scarf he has been wearing around his neck. The scarf then appears around the neck of Bluebeard and later becomes the instrument of Judith’s death. Because most of the doors lead

Judith to discover blood in some form and she offers her bare neck to Bluebeard for his kiss, the suggestion that he might be a vampire seems ever present in Friedkin’s interpretation.

Friedkin’s cinematic credentials manifest in the way Bluebeard’s first three wives are shown. They are projected ghostly squiggles swimming like bloodless tadpoles in the forbidden seventh room. Except for the opening scene in which the Duke paddles Judith in a gondola to his castle, the set is strictly minimalist. What enlivens the stage are the colored lights that stream from each door as it is opened.