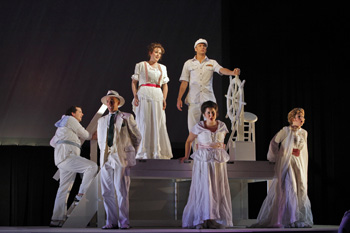 Daniel Catán’s “Florencia en el Amazonas,” an opera commissioned and premiered by the Houston Grand Opera under David Gockley, was in 1996 the first Spanish-language opera commissioned by a major American company. Los Angeles Music Center Opera, the Seattle Opera and the Opera de Colombia shared the commissioning and ran their own productions of this one-hour-and-40-minute opera.

The University of Maryland Music Department and Maryland Opera Studio have produced a scaled-down version of “Florencia en el Amazonas.” Director Leon Major calls the production a “white opera,” meaning in this case that there are fewer instruments in the orchestra pit and that the cast and conductor are part of the university’s graduate studies program. This “no frills” approach by Major, who produces many contemporary operas, in no way diminishes Catán’s opera.

The libretto, which is loosely based on Gabriel García Márquez’s “Love in the Time of Cholera” and which was adapted by Márquez’s handpicked librettist Marcela Fuentes-Berain, follows a group of travelers on an Amazon riverboat named El Dorado. Traveling incognito is the opera diva Florencia Grimaldi (played by soprano Bridgette Gan), who has been hired to celebrate the re-opening of the opera house in Manaus. She also hopes to recover a lost lover, a rare butterfly hunter named Cristobal. Fellow travelers include Rosalba (soprano CarrieAnne Winter), a journalist writing about the elusive Florencia Grimaldi; the unhappy but married couple Paula (mezzo Monica Soto-Gil) and Alvaro (baritone Andrew McLaughlin); as well as the captain of El Dorado (bass baritone Aaron Ingersoll) and his nephew Arcadio (tenor Joe Shadday). Following the boat is the mysterious figure Riolobo (baritone David Blalock).

The literal tipping point of the opera is a storm that breaks up not only the boat, but also a rather static look at who these people are. Alvaro is thrown overboard, the journalist’s notes are ruined by seawater, and Arcadio gets a coveted chance at steering the boat. The diva comforts the journalist who despairs over the loss of her work on the opera singer and also is confused by the amorous attention of Arcadio. As the ship approaches Manaus, Riolobo reunites the now grieving Paula, who earlier threw her wedding in a wine bottle with Alvaro, who says her voice called him back from the dead. Florencia, now known to the journalist, counsels Rosalba to follow her heart and therefore not reject Arcadio. Finally one last hitch is that no one can get off the boat because of reports that the community in Manaus has been afflicted with cholera. Nonetheless, the diva senses her long-lost lover Cristobal is near and takes comfort in that belief.

The stage set for this production is a clever boat structure made in two parts (allowing the boat to break in two parts during the storm) and on wheels. A video projection of a map tracks the progress of the trip along the Amazon. Extras walk behind the boat with tree drawings mounted on long poles to provide the effect of passing land. Other extras carry butterfly mobiles on long poles to reinforce how populous this beautiful insect is and how Florencia lost her lover when he took off after a swarm of butterflies. The entire cast is dressed in 19th-century white clothes. Therefore the overall visual effect of boat, floating trees and butterflies along with the white-clad players is pleasingly eye-catching.

As to Catán’s shimmering music heavy on arpeggios, it is very pretty in the way Puccini’s or Debussy’s music comes across. For this reviewer’s taste, it does little to advance opera in the 21st century. Nevertheless the University of Maryland ensemble made up of piano, harp, flute, clarinet, and percussion did a good job of performing this hypnotic music and the singers, while not distinguishing themselves one from the other, did a credible job of delivering the sung text with sharp clear diction. While there were English surtitles, it was easy to hear words like mariposa (butterfly) and corazón (heart).