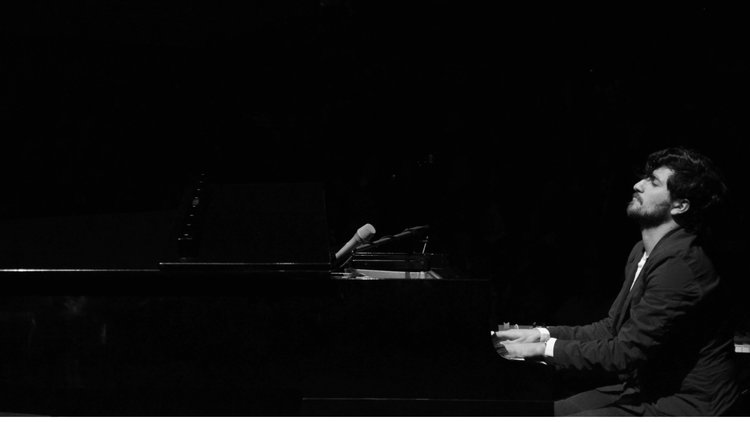 So where does that leave these composers, and/or “serious music”?

In a brave new world of diversity or in one ruled by the democratic “ideal ” of speaking with one voice or should we just shut up and dance?

German philosopher Herbert Marcuse ( 1898-1979 ) touched on similar questions in his 1964 book “One Dimensional Man ” where he opined that democracy didn’t necessarily mean freedom because both Marxist and capitalist models have systemic flaws.

The relative success and/or failure of capitalist and Marxist camps is a moot question but the stylistic diversity on these four CDs is undeniably impressive and sometimes moving.

In the work of Lebanese-born composer/oud-player/singer Marcel Khalife ( 1950 — ) sound functions as emotion and emotion functions as sound, and Khalife has managed to walk the tightrope of fame while also deepening the resources of his ancient instrument the oud — pronounced “ud” –which fathered our Western lute and guitar.

But politics has inevitably seeped into Marcel Khalife’s work. He gave concerts in Beirut during the Lebanese Civil War ( 1975-1990 ) whose unapeased ghosts — Christian vs. Muslim — reappeared in Lebanese director Ziad Doueiri’s deservedly honored film The Insult ( 2017 ) which was reviewed on www.culturevulture.net .

But the words and music on Khalife’s latest CD ” Sing A Little ” don’t traffic in politics per se.

Instead it showcases the vocal gifts of Lebanese singer www.abeernehme.com in Khalife’s settings of twelve Arabic poets, the most famous being the late great Palestinian Mahmoud Darwish ( 1941-2008 ) whose death, in Houston, Texas, was a cause of great sorrow in the Arab world and beyond.
Khalife is the most celebrated composer to set the equally celebrated Darwish’s poems to music. His setting of Darwish’s poem “Think of The Other ” ( Fakr Bi Ghayrak ) for Nehme, and Khalife’s instrumental/choral group  Al- Mayadine; and the Qatar Philharmonic Orchestra conducted by Michalis Economu, charms the ear with Khalife’s unique feeling for expressive vocal and orchestral sound.

“Flute ” ( Mizmar ) is almost a throwaway dance for Nehme, and company.

” Returning ” ( Raja’a ) begins with Hassan Moataz’s expressive upper register cadenza on his quarter-tone tuned Arabic cello which breaks into a syncopated brass band march for full orchestra.  Other songs are just as expertly sung and orchestrated. Khalife blends his native Arabic cum French influence — did you know that the French occupied Lebanon for many years ? —  but Khalife’s settings of these poems would have been understandable and likely more powerful if their words were available here in English translation. He  isn’t afraid of being seductive and “musical ” in the same breath. ” Sing A Little ” is extremely beautiful but it’s worlds away from the emotion that Khalife and company summon in www.nagamrecords.com‘s CD ” Andalusia of Love ” which features many gifted musicians including one of his two composer-pianist -singer sons Rami Khalife ( 1980 – ) — and his composer-pianist– percussionist — singer brother Bachar on the other .
Rami Khalife’s  CD “Lost ” is accomplished but not as exciting and / or moving as most of his live and/or after the fact recordings — can we say “recordings ” at this late date ? — but it has many virtues.

It’s fluid and /or dramatically acute with quick and sometimes alarming changes of weight/ texture which are the musical correlatives of jump-cuts in a film, say the shots of Mercedes McCambridge on her bucking horse in George Stevens’ 1956 “Giant”. Khaife fil’s music differs radically from Khalife pere because he seems to have absorbed the largely percussive modernist traditions of several European composers into his own work.terms. His sense of sonority may come from his studies with Bartok’s last pupil Gyorgy Sandor at Juilliard.  Melodies are strictly written but sound improvised. The virtuoso changes in “Spotlight ” encapsulate this approach but there are moments here where its slowly enunciated opening chords float free in space. The title track uses the same material but this time rhythmically and harmonically altered and in perfect sync with Khalife’s Arabic vocal. The range and depth of his pianistic touch achieves a kind of apogee here as it does in his live http://www.youtube performance of the Abdullah el Masri ( 1962 — ) Piano Concerto # 1 (2003 ) which this gifted and largely unknown Lebanese composer wrote for Khalife’s singular gifts, and which Khalife recorded with Moscow’s Symphony Orchestra Globalis on www.nagamrecords.com where it’s paired with the rarely performed Prokofiev Piano Concerto # 5 (1932). The pianist has written the following.

” I dedicate this album ( “Lost”)  to all the people in the world who strive and fight to regain their dignity” and this has an especial meaning as I write this on the 50th anniversary of Stonewall which remembers the nights when lesbians and gay men rose up in NYC in their struggle for acceptance and their desire to make the world a better and more dignified place for all.

Who knows if French pianist Vanessa Wagner’s solo CD does that though it does bring the efforts of twelve composers — six Americans, two Brits, one German, one French, one Belgian, and one Latvian — into the space of a single CD. You could call these composers minimalists because their pieces are rooted in different kinds of repetitive structures but most music the general audience accepts is repetitive because you couldn’t hear it it didn’t repeat. And Wagner’s restrained passion — she’s French — and immaculate technique tries to to extract the essence of each piece. The largely unknown Moondog ( Louis Thomas Hardin 1916-1999 ) is represented by the simple but deeply affecting “Fur Fritz ( Chaconne in A Minor ) and “Elf Dance.” Another American, Bryce Dessner (1976 – ), is represented by  Ornament 2″ and “Ornament 3” their subjects being the ornamentation or changing the expressive color of a note and relation its harmonic implications, and line. Dressner’s are OK as studies but are worlds away from the content cum expressive color of almost any solo piano piece by Faure, Debussy, or Ravel. The 2005 “A Hudson Cycle” by American Nico Muhly ( 1983 — ) is perfectly quiescent but not very interesting. Perhaps Muhly needs a big structure like a film to support his music? His score for Stephen Daldry’s preposterous 2008 film The Reader — the German heroine works for Siemens but can’t read — hello ? — and commits suicide in prison by hanging herself over a pile of books including a J.B. Leishman — in English ! — translation of Rilke — almost saves this aimed at “the serious intellectual ” disaster. Muhly’s choruses for his second big opera for ENO and The Met — the 2017 “Marnie ” were effective, his contrapuntal lines firm. He’s gifted but seems to lack a recognizable voice, and ” A Hudson Cycle ” seems largely in Philip Glass’ musical shadow.

Brit Michael Nyman ( 1944 -) who’s best known for his film scores for Peter Greenaway has a singular voice and his eighteenth century-like — looped song  ” The Heart Asks Pleasure First “, whose title comes from Emily Dickinson’s eponymous nineteenth-century poem, was used throughout New Zealand director Jane Campion’s 1993 breakthrough film “The Piano” which supposedly calls up all kinds of “forbidden ” pleasures which like those in “The Reader ” were all gussied up as you guessed it —  meaningful  “art”.

Belgian Wim Mertens ( 1953 – ) www.wimmertens.be may be best known for his 1980 book “American Minimal Music ” which I read in its 1983 English translation but Mertens’ work with his group in “Struggle for Pleasure ” ( 1983 ) is rhythmically alive and –yes emotional.  I wish I could say the same for “Ramble on Cortuna ” by Brit double bassist Gavin Bryars ( 1943 — ) which seems too little and too long. Ditto “Das Buch Der Klange, Part 2 “( 1979-1982 ) by German Hans Otte ( 1926-2007 ) which I’d wanted to hear for years because Tom Johnson covered it in a review he did which ended up in his 1989 book The Voice of New Music just sounded precious here. You could say that lots of the pieces here are school of Satie “furniture music ” but Otte’s furniture didn’t sound the least bit inviting. Nor did the strangely included  ” Balta Ainava ” by award-winning Latvian composer Peteris Vasks ( 1946 — ) which came off as an old school meander by a late Romantic.
Composers have often written according to the dictates of fashion while also struggling to confront the ghosts of their masters breathing down their necks. but where does that get them?

American composer William Susman ( 1960 — ) may be haunted by the 12-note music of Schoenberg’s most influential student Anton Webern ( 1883 -1945 ) whose work became a fashionable touchstone for post 1945 avant garde composers, and he has long admired Webern’s Op.27 piano piece for its clarity. His music works remarkably well as “pure music ” and he’s written lots of very effective music for film, especially his imaginative and charming score for Native New Yorker (2005).

Susman’s affects here appear utterly relaxed and his distinctive hammered cum pedal sound in one of his best pieces  “Quiet Rhythms : Prologue and Action No. 9 ‘” is a natural segue into the music of Philip Glass ( 1937 — ), namely his Etude # 9 — in f minor ( 1994 ) from Book 1 of his two-book set of twenty etudes, which Wagner plays here. She observes Glass’ metronome marking — quarter note = 144 beats per minute — which is faster than Glass’ rock solid but affecting performance on his www.orangemountainmusic.com CD of Book 1. She manages the metric shifts between 3/4 and 5/4 alright but the subtle sounds within the changing intervals like the “mf diminuendo ” from bar 8 to 12, and further on, elude her. She doesn’t get the poetry at the heart of this remarkably straightforward but mysterious piece which like all of Glass’ music inhabits the present while also seeing the past. The repetitions aren’t meant as repetitions per se but as moments in musical time so that stasis and movement are felt as two sides of the same coin. The Australian pianist www.sallywhitwell.com and the Italian pianist Alessandro Conti — both on www.youtube.com —  bring out these seemingly opposite but actually apposite. Glass’ figurations may sound superficially “mechanical ” but each needs to work as both armature and expression.

Glass’ “The Not-Doings of an Insomniac — in the form of a partita in 7 movements for double bass ” ( 2015 ) seems formally restricted on first listen but is actually very imaginative within the bounds Glass sets. Each section with Robert Black as bassist interrupts and comments, and sometimes extends the seven poems by friends of the composer like Patti Smith and Yoko Ono. These are some of the best read poems I’ve ever heard because Black never adds anything “poetic” but lets the words speak for themselves. And it helps that the subject matter isn’t “exalted” but colloquial matter of fact which may be a singular American trait. The composer has always been attracted to the precise “dry” sound that violinist Ivan Galamian, who taught at Julliard when Glass was there and Black’s double bass sound is in a way like that because it’s lean and wiry. Each note bites. This quality informs Black’s performance of Prelude to Endgame (1984) with tympanist Jonathan Haas whose sound is equally dry and punchy. Of the many recent www.orangemountainmusic.com CDs this is one of the best. It’s certainly one of the most distinctive.