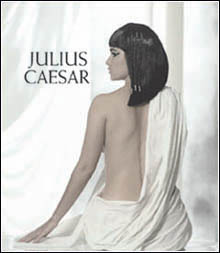 The libretto for Handel&#146;s Julius Caesar by Nicola Francesco Haym was adapted from renditions of the story popular in the late seventeenth and early eighteenth centuries. Far from the dark tale of shadowy morality and political intrigue concocted by William Shakespeare less than a century earlier, it is a simple heroic narrative in which the put-upon Cleopatra is saved from the clutches of her evil brother Ptolemy by the dashing Caesar. He has come to Egypt in pursuit of arch-rival Pompey, who has just fled Rome in the wake of the civil war. Its straightforward plot and easily recognizable, clearly defined characters without psychological complexity made it ideal for the opera format favored most by this composer.

Handel traveled to Italy in 1707, where he composed the first of his series of Italian operas. Inspired by the work of composers such as Alessandro Scarlatti, and intrigued by the still relatively new musical form, he embarked on a campaign to spread this brand of opera to England and Germany. The genre he admired most was Opera Seria (literally &#145;serious opera&#146;), a very formulaic variant in which exposition systematically alternated with reflection. The plot was driven by sung dialogue which could feature comic as well as dramatic moments, but each scene was unfailingly followed by an aria in which a principal character reflected upon what they had just experienced. It was a repetitious format, made even more so by the strict organization of the arias themselves. These could only express a single emotion and were required to use an elementary verse structure featuring harmony, counter-harmony, and then embellishment.

Handel&#146;s work with Opera Seria became synonymous with the Royal Academy of Music, a body founded in 1719 to bring Italian opera to England. Handel was its Chief Composer and Master of the Orchestra. The &#145;academy&#146; enjoyed great success for some ten years. It oversaw the first staging of Julius Caesar in 1724, as well as thirteen others by Handel himself. By 1729 this body was closed down however. Public boredom with the rigidity and perceived intellectual pomposity of Italian opera had already led to the massive success of The Beggar&#146;s Opera. Hummable, folksy songs were in, calculated, mathematical composition was out. Even a revival of Julius Caesar in 1729 could not save the it. Handel doggedly fought to keep Italian opera in the public eye, but ill health and continued failure eventually forced him to leave the managerial duties to others and return to full time composition.

Ironically there is a lightness in tone and clarity in expression in Julius Caesar which makes it eminently watchable today. Opera Ireland&#146;s current production has been wittily staged by director Elaine Padmore in a manner which strikes a strong contrast with their concurrent production of Don Carlo. Julius Caesar gleefully follows the rigid formal patterns of the Opera Seria genre and presents its overly simplistic story without recourse to self parody. Yet the production is extremely self-conscious, very much aware of the conventions which define the opera, and eager to find seams through which to express a postmodern sensibility.

To begin with there is the casting of women in male roles, a neat, twentieth century conceit (and an ironic reversal of the seventeenth century one) which gets around the lack of castrato performers. Handel&#146;s score was composed at the height of the castratos&#146; popularity, and a fey, young Caesar performing in Mezzo-soprano was very much the order of the day. The cross-casting throws some of the masculine posturing typical of these characters into reflective relief, with Anna Burford making a very effective Caesar. Her mixture of heroism and macho-ism is delicately played. It works especially in contrast with the character of Cleopatra (portrayed by Irish Soprano Regina Nathan), whose femininity is of a rather more passive variety than would be expected nowadays.

Much of the historical interpretation is highly questionable anyway, as is the infusion of a religious sensibility which blurs Christianity and Roman mythology without ever drawing on the specificity of the Egyptian variety. The high-voiced males and females filling male roles add enough symbolic complication to the mix to take the pain out of some of the more glaringly obvious and simplistic distillation of fact and ideology in the libretto.

Handel&#146;s first concern was never the story itself. He was more interested in the music. The score is conducted with delicate precision by Noel Davies (conducting the RT� Concert Orchestra), and it is pleasantly complex within the limitations of the chosen format. Padmore goes so far as to underline one of Handel&#146;s obvious passages of orchestral self-indulgence by having one scene staged in eighteenth century costume while a performer dressed to look like the composer sits at a harpsichord and dispenses sheets of music to the singers.

None of this prevents the opera from delivering on its most basic levels. It is well acted and well sung, full of visual invention and aural virtuosity which is pleasant to see and hear. Designer Bruno Schwengl&#146;s relatively sparse sets and props actually match the limited musical palette. Though it lends itself to opulence given the setting, this story is best told against clean lines and an uncluttered backdrop, which is exactly what is offered. The performers are a mixture of Irish and UK singers, with Polish Counter-tenor Artur Stefanowicz making a menacing but suitably boyish Ptolemy and Dutch Mezzo-soprano Cecile van de Sant providing a heartfelt rendering of Cornelia, widow of Pompey.