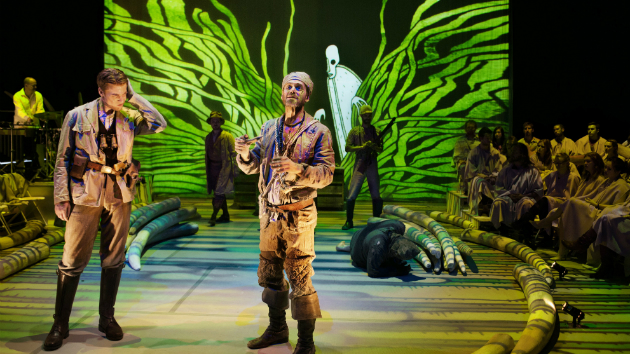 A “dark” subject drawn from a famous book. A US premiere from an opera from the other side of the pond. Prestige. Glamour.

Well, many operas and films aren’t that different from people.They look or sound profound, but aren’t. “Acclaimed ” Brit composer Tarik O’Regan’s opera from Joseph Conrad’s “classic” 1899 serialized story “Heart of Darkness” which came out as a book in 1902 appears to offer something “different ” but it’s the same weak tea the Brits have been doling down our oh so receptive American throats for years.

Life is violent 24/7 but O’Regan’s music, especially the wispy opening scene in his take on Joseph Conrad’s “Heart of Darkness ” was Britten in the Bush. Yet what makes life and opera so exciting is the collision between our lower and higher selves. But O’Regan, who was born in London in 1978 to a Moroccan father, and started composing when he was twenty-three — this should tell you something — seems, as a child of colonialism — let’s forget that the French colonized Maroc — hellbent on fitting in. And he doesn’t seem to really connect with the subject matter which is more than evident in his on www.youtube.com about “Heart of Darkness” where he, in typical post-modern fashion, dances around the subject — Conrad’s tale is “nebulous ” — who’s he kidding ? — while engaging in pc posturings, that well colonialism was “bad”.But If he really felt it then music, and the drama would have jumped off the stage, but that rarely happened.

“Good intentions ” don’t equal “sincerity”, and though O’Regan’s “intentions” may be good, holding an audience captive for a 70 minute intermission – free piece, is not my idea of fun. The vocal writing was recitative drab –think of what Mozart or even Bach would have done — and anchored to Conrad’s stubbornly non-theatrical prose, which added up next to nothing because sounds on the page rarely sound like sounds on the stage. O’Regan’s visual artist friend Tom Phillips, who provided the libretto for him, which they worked on from 2002 till its 2011 Royal Opera House “downstairs” Linbury premiere. But it didn’t seem to inspire O’Regan to write apt music for the cast of 12 singers, large SATB chorus, 14 orchestral players — including the proverbial “battery of percussion” , other than in patches. ” Primitive ” ostinato patterns in uneven rhythms — he’s obviously been listening to Philip Glass — and calm “rapturous ” passages for winds and strings which sometimes sounded straight out of Britten’s “Peter Grimes”  (1945).

But the real problem is that the Pole turned Brit Conrad is completely successful in his own medium — words — and seems to resist translation into more flexible media. Christopher Hampton’s 1995 film of “Secret Agent”  was a virtual washout despite Glass’ very evocative score.Far more successful was the late great French director Patrice Chereau’s disturbing film of Conrad’s long story “The Return” as “Gabrielle” (2006) which he re-located to Paris and didn’t follow slavishly ( I reviewed it for www.culturevulture.net ). The heart was there and so was the darkness.

O’Regan’s “Heart of Darkness”  is a worthy but deeply flawed first opera, which should have been cut by 20 minutes. A filmed stage or filmed for TV version could work very well on The BBC or Channel 4. Still Nicole Paiment’s always enterprising www.operaparallele.com gave it its all. The 12 singing actors, including Philip Skinner, as Mr Kurz, gave focussed and characterful performances, and Paiment’s orchestra played with passion and point. They were substantially aided and abetted by Matt Kish’s projected illustrations which loomed above the players and actually transformed Z Space’s large non-proscenium stage. The audience response was enthusiastic.