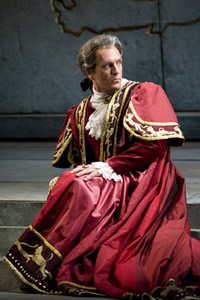 “Idomeneo” has always given San Francisco Opera a little trouble. Mozart’s first fully realized opera seria was not mounted by the company until 1977, in a fussy Jean-Pierre Ponnelle production that was scrapped for another 12 years later. That 1989 version was interrupted in the middle of its run by the Loma Prieta quake, and the current staging, which premiered in 1999, was derided for its lack of dramatic impact.

Late in this season’s run at SFO, “Idomeneo” remains bedeviled by many of its past problems. Whereas in many productions the hard edges are smoothed as the cast and company settle in, this incarnation has not mellowed with age. The emotional intensity of Mozart’s music is not matched by two of the leads, and much of the truly excellent singing is drowned out by the sheer volume from the pit. The stylized sets (John Conklin) and bulky costumes (Michael Stennett) often confuse rather than enlighten, and John Copley’s stage direction (particularly for the large chorus numbers) comes off as mechanical and stiff. But for a cast substitution that brought an impressive turn by Adler fellow Daniela Mack in the trousers role of Idamante (British mezzo Alice Coote was indisposed because of a back injury), the second-to-the-last performance in the run left the impression of a production whose parts were greater than its whole.

At its core, “Idomeneo” centers on love and duty as they entwine in one’s heart, family, and homeland. King Idomeneo, returning to Crete from the Trojan War, must fulfill a dreadful oath to Neptune for sparing him and his fleet during a storm: slay in sacrifice the first man or woman he meets once ashore. In a mean trick of fate, that turns out to be the son (Idamante) he has not seen in years. The king decides to spirit him away to Argos with Elettra. The latter has been exiled to Crete since her mother Clytemnestra’s murder and is scheming to marry Idamante, who secretly loves another, Ilia, the Trojan King Priam’s daughter held captive on Crete. The ensuing plot shudders along according to the melodramatic standard of Mozart’s day, involving Neptune’s vengeance in the form of an angry monster, triumphantly slain by Idamante, who then lays upon the execution slab, ready to accept the god’s bidding. Professing her love, Ilia then offers herself as a substitute. But all ends well, as an offstage Oracle declares that Idomeneo will abdicate in favor of Idamante, thus freeing the new king to wed Ilia (much to Elettra’s dismay).

What sounds on paper like credibility-straining hokum can, thanks to Mozart’s score, convey affecting and genuine sentiment. As Ilia, soprano Genia Kühmeier hews beautifully to the heart-rending dignity of her character from her opening aria, “Padre, germani, addio” through the love she wishes the breeze to convey to Idamante in Act III (“Zeffiretti lusinghieri”). Likewise, young tenor Alek Schrader (another Adler fellow) adds just the right foreboding to the role of Arbace, singing the old counselor’s “Se il tuo duol” with an age-weary credibility (though his limp—exaggerated, perhaps, by the cumbersome garb he and others in the cast must bear—is patently false). The chorus, under Ian Robertson’s direction, aptly buttresses the soloists, conveying as required both pathos and majesty.

But in the role of Idomeneo, tenor Kurt Streit (who has made a specialty of the Mozart operatic repertoire), strains both in the high range and also in projecting over the orchestra’s loud playing (though conductor Donald Runnicles keeps the tempi flying, he has difficulty modulating the volume). Streit’s Act II “Fuor del mar” shifted between forced bravura and shaky confidence, particularly in his embellishments. And soprano Iano Tamar’s Elettra simply missed the point, singing not as a menacing suitor scorned but as a somewhat listless brokenheart, never reaching the boiling point even in her mad departure aria, “D’Oreste, d’Ajace”–which director Copley has situated, oddly, in an empty room, where she delivers it to no one in particular.

Perhaps the most fortuitous outcome of this production was in casting soprano Mack to fill the pivotal role of Idamante vacated by the indisposed Coote.(Mack was scheduled to sing it again on closing night.) Though the mezzo Coote, acclaimed for her roster of travesty roles, enjoyed favorable reviews earlier in the run, Mack stepped into the role with a brio that seemed to jolt the sluggish production from the doldrums whenever she appeared. Idamante’s Act III surrender, “No, la morte,” came across with clarion nobility, while her love duet with Kühmeier had an unforced poignancy, at once tender and convincingly virile. Here is a star in the making, and her return in seasons to come—either with another of Mozart’s ensemble works or in one that will showcase her own talents–will be much welcomed.