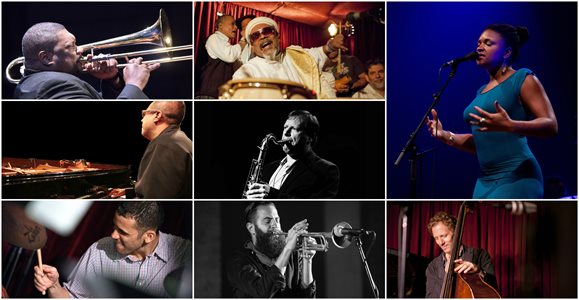 JAZZ 100 was the Kimmel Center’s kick-off to their season’s jazz programming with the all-star line-up of players on the Merriam Theater stage in tribute to the centenary celebration of Ella Fitzgerald, Thelonious Monk, Dizzy Gillespie and Mongo Santamaria- all born in 1917 and destined to become jazz giants.

Pianist-composer Danilo Pérez is musical director for the tribute concert and has assembled a troupe of premier players- saxophonist Chris Potter, trumpeter Avishai Cohen, trombonist Wycliffe Gordon, bassist Ben Street, drummer Adam Cruz, percussionist Roman Diaz and the vocalist Lizz Wright, all bringing virtuosic artistry to the concert. But even with some electrifying musical moments, the debut performance, in front of a US and European tour which extend into next year, seemed like a thrown together affair, more fitting in a after hours club session than on a concert stage, with moments when it seemed under-rehearsed or rote.
Cuban percussionist Diaz kicked it off in spirited enough bongo – vocal call and response of Afro-Cuban lines with the audience, but when the following full orchestral unspooled with underwhelming.

Things finally got going both with Diaz’s conga drive and raucous horn streams featuring Gordon’s muted trombone and Chen’s scorching trumpet lines. It was followed by a mid-tempo bop with Gordon witty and raspy scat singing ala Dizzy. Gordon plays the trombone with such with unfussy technical artistry and earthy power. Even though the three horns have a blended sound of warmth and dimension, the hand-off were hazy in this performance and Cohen and Potter’s solo work struck as too detached.

The instrumentals touched on the theme with signature musicality from the Monk, Gillespie and Santamaria styles. Pérez introduced Lizz Wright as one of his favorite jazz singers and you instantly knew why as she launched in the Morgan Lewis-Nancy Hamilton standard ‘How How The Moon,’ her deep, golden center voice instantly captivating and making this classic number her own invention. Unfortunately, there were spots when she was being drowned out by the band. Wright’s voice was overshadowed even more on the brassy 50s novelty “Radiant Stockings.” Later, all was perfect for the Mongo Santamaria’s composition “Afro-Blue” a breezy basso samba orchestral which lushly framed Wright’s luminous vocal.

Everyone was on board when Pérez introduced the first bars of Monk’s defining jazz classic ‘Round Midnight.’ Perhaps after hearing the hundreds of versions from every sector of jazz music, Pérez wanted to go in an entirely different direction, but his approach came over as a deconstruction and over thought. He may have been invoking Monk’s chromatic spirit, but more of a studio exercise, than a concert piece. After When Pérez finally circled back to the most famous melodic lines in jazz, Monk’s theme was just roughed up, not cracked open. In contrast, Pérez was gorgeously understated accompanying Wright on “It’s Up To Me and You” a composition Ella Fitzgerald wrote in tribute to Dr. Martin Luther King.

The rest of the players returned and the entire band was sounding more cohesive on instrumentals that featured the dexterity and crystal resonance of Ben Street’s bass lines. But just as the band seemed to be hitting a full groove, Pérez announced their last number which proved to be a fluid jazz sinfonia that built off a spindly ascending chord that kept evolving into ever rich orchestral progressions, and a sample of the fully realized luster of this group.

The ending two money shot numbers had the audience on their feet in lusty applause that coaxed a completely forgettable encore. Wright didn’t return to the stage for a group bow, which seemed odd, but doesn’t necessarily suggest anything negative.

Indeed did seem like the musicians were having a good time playing together, so it is curious that the launch performance didn’t have professional polish and sustained energy. All of the elements were obviously on stage for a brilliant tribute to jazz giants. It is not a stretch to believe that it will hit its potential on tour, on this night, something tells me that Ella, Thelonious, Dizzy and Mongo would have had some sharp notes had they been in on this session.