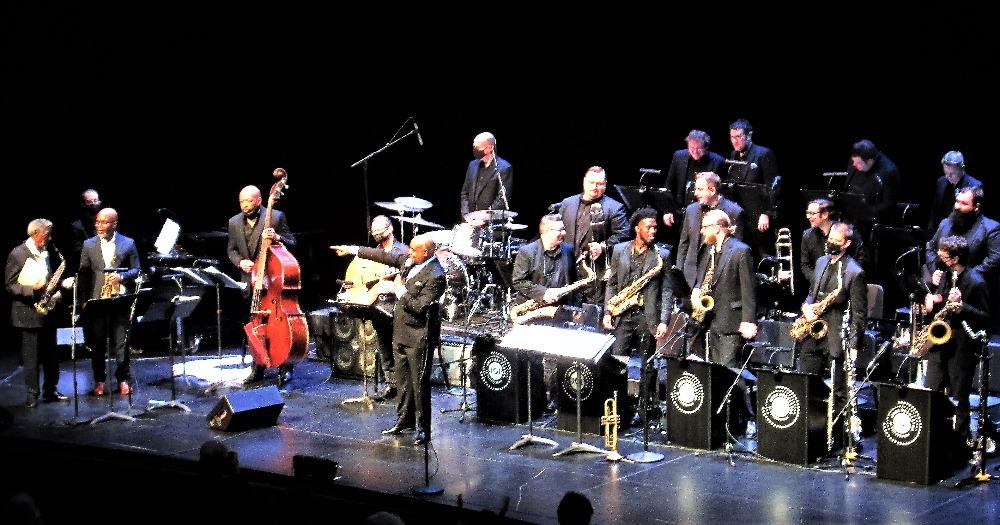 Virtuoso trumpeter Wynton Marsalis is musical director of Jazz at Lincoln Center Orchestra, and as a composer most known for his Pulitzer Prize winning jazz oratorio ‘Blood on the Tracks.’ Marsalis’ second commission with the Philadelphia Orchestra after his hugely successful Violin Concerto, with a Tuba Concerto, which he composed for Philadelphia Orchestra principal tubist Carol Jantsch. The piece premiered on the same program as Brahms’ 1st Symphony Dec. 10-12.

Marsalis’ fusion of classical and jazz symphonic forms is established in the Concerto’s first movement- ‘Up!- with a pugilistic interplay with the orchestra. The insistent chromatic tuba lines, from low rumble to dissonant tremolos that Jantsch won’t let be drowned out by the strings. In the second movement- ‘Boogaloo Americana’- opens up the symphonic dialogues with simmering Afro-Cuban dance themes laced with orchestral echoes of Copland-esque motifs. It strikes as a rousing tug of war between stylized symphonics and raucous big-band swing.

Marsalis ignites the tuba as a jazz instrument’s untapped voicings in the last two movements. ‘Lament’ and ‘In Bird’s Basement’ Jantsch delivers breathless lines of swirling notes, staccato lines, and basso riffs to cap off an altogether brilliant performance. In comments after the performance, Nezet-Seguin commented that Marsalis’ piece belongs in the pantheon of other groundbreaking concertos.

Johannas Brahms’ Symphony No. 1 always lived in the shadow of Beethoven, but with some interpretive tweaking, it can stand on its own merits. Nezet-Seguin eliciting a depth of dimensional sound throughout and sharp detailing of its inner orchestral drive. Subtle progressions in shaping the symphonic arc without vamping the dramatic themes. Among the outstanding soloist in this performance. David Kim (1st violin) and Phillipe Tondre (oboe), Ricardo Morales (clarinet) Daniel Matsukawa (bassoon) Jennifer Montone (horn).

Trumpet virtuoso Terrell Stafford’s 18-piece Jazz Orchestra of Philadelphia returned to the concert stage after two years. The band’s usual home is in the Perelman Theater, which has wonderful acoustics, but JOP blew the roof off at the Annenberg Center’s larger Amphitheater wildly wonderful rendition of Duke Ellington-Billy Strayhorn’s ‘The Harlem Nutcracker’ and the band’s delayed centenary tribute to jazz great Charlie Parker, which was originally scheduled for 2020.

Stafford always has charming repartee with the audience, and he started off the night with comments about some of the stand in musicians on the JOP bandstand, who were in fact, called up at the last minute to substitute for some of the musician who were unable to perform. No surprise, under Stafford, that no one skipped a beat, and JOP was as holiday glittery as ever, performing The Harlem Nutcracker.
Among the many outstanding arrangements on Tchaikovsky’s score, is the smoldering “Sugar Rum Fairies” with drummer Steve Fidyk bongo cool intro on the skins, and pianist Josh Richman bringing Ellington drollness on the piano for an intoxicating musical cocktail with Chris Farr on lead tenor sax & Sean Bailey on Reeds, not to mention those sousey muted horns.

Waltz of the Flowers (Waltz of the Toreadors) the muted horn & swirling clarinet & trumpet & bass swinging out more like the Basie band. Tchaikovsky’s ‘Arabian’ jazz delectable ‘Arabesque Cookie’ with Chris Oates and smoldering sax solos by Chris Oates and Patrick Hill, framed by the mesmeric rhythms of bassist Lee Smith.
The set finished with Stafford thanking the musicians who stepped in at the last minute for those who had to bow out at the last minute, thanking them “a testament for the great musicianship here in Philadelphia …that they could come in and play at such a high level” and then joking ‘not just filling in…maybe taking over”
The second half of the concert was a freewheeling medley in homage to Charlie Parker, with guest saxophonists, the legendary Charles McPherson, and the younger Shaw both inspired by the inestimable musical legacy of Parker.

The hour-long set kicked off with Parker’s ‘Yardbird Suite’ with Shaw and McPherson, both alto saxmen with their own signature sounds, and range even in moments that echoed some of Parker’s indelible phrasing.
Then the unpaused medley included Parker classics “Quasimodo” “My Little Suede Shoes” “ ‘Chasing the Bird “ and “Diverse.” Mixed in were two other jazz standards that featured Parker’s haunting sound. Shaw’s leaning into the lush, warm tonalities on Gershwin’s ‘Embraceable You.’ McPherson soloing on the Billie Holiday torch song ‘Lover Man’ with anguished sax riffs essaying the depth of the song’s narrative beyond the expected pathos.

Stafford picked up his trumpet for a few blazing solos toward the end of the set. And by the end this audience was on its feet and stayed there as Stafford cued “One more?” and they rung out the year with their brassiest swing version of “Jingle Bells.”