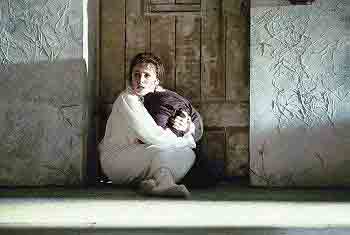 Leo&#154; Janacek lived over about the same span of years as did Puccini and his first successful opera, Jenufa, premiered in the same year (1904) as did Puccini’s Madame Butterfly. Compared to Puccini’s huge international renown, in his own lifetime and to this day, Janacek remains far lesser known. The difference in their popularity may be attributed in part to Janacek’s Czech language which is more exotic, surely, than Puccini’s Italian, and not as instantly musical to the ear. Language was a central concern of Janacek’s music making–he wrote the music to follow the natural flow of the language, more concerned for the dramatic effect than for the flowing musical lines and melodies which make Puccini’s operas so musically accessible.

Then, too, Janacek was a realist and a social critic who focused on the lives of ordinary people without idealizing them. In contrast, Puccini’s Butterfly is smoothed over into romanticism and is limited in scope to one simple, if sad, relationship, albeit framed in its context of exploitative colonialism. Butterfly and Jenufa each are heroines who have had a son by a callous lover who is later betrothed to another. Puccini milks the situation for tragedy and spins the exquisite melodies of Butterfly’s love and despair. Janacek digs intensely not only into Jenufa’s changing emotions, but also into those of her step-mother and the two men in her life, all constrained within the rigid religious and social mores of a small rural town. In the end Jenufa finds redemption, rather than tragedy; it is her step-mother who becomes the genuinely tragic figure.

In briefest outline, Jenufa is in love with and pregnant by Steva, her handsome, drunken, philandering first cousin, owner of the town mill. Laca, whose mother married into this family, is the unfavored step-cousin, in love with Jenufa, and bitter about her relationship with Steva. Kostelnicka, Jenufa’s stern step-mother, is the sexton of the church. She doesn’t yet know that Jenufa is pregnant and publicly tells Steva that she forbids their marriage until he has been sober for a year. Alone with her, Laca confronts Jenufa and, when she persists in defending Steva, he slashes her cheek with a knife and is instantly remorseful.

As the second act begins, Jenufa has had a baby son, secluded in the house; Kostelnicka has told people that Jenufa is away in Vienna. Kostelnicka has prayed for the baby to die; since he hasn’t, she summons Steva to demand he marry Jenufa. Steva refuses, telling her he is now betrothed to the mayor’s daughter. Laca comes to the house and Kostelnicka tells him about the baby; still in love with Jenufa, he can’t accept taking on Steva’s baby. Kostelnicka tells him the baby died. When Laca leaves, Kostelnicka takes the baby and leaves, too, her intentions all too clear. When she returns, she tells Jenufa that the baby died while Jenufa was deliriously ill. Laca returns and Jenufa agrees to marry him.

Act III is the following Spring, Laca and Jenufa’s wedding day. In the midst of the preparations, the dead baby is found under the melting ice. When Jenufa recognizes the infant’s clothing, she is accused; then Kostelnicka confesses. Jenufa understands Kostelnicka’s motivations and forgives her, though it is clear that Kostelnicka will never forgive herself. Jenufa tells Laca that he doesn’t have to marry her, but he stands by her and they are reconciled.

In a very short two and a half hours, Janacek, with extraordinary economy, tells this tale of love and frailties, forgiveness and redemption. The essentials of the history of the characters, their relationships, and the exposition of the story would be clear, even without the crutch of a synopsis. The shadings of the characterizations are remarkable, none all good or all bad (even the shallow and fickle Steva), but all thoroughly human.

But the performance that etched its way into the operatic memory book was the Kostelnicka of Kathryn Harries. The conviction of her portrayal of the desperation in Kostelnicka’s decision to kill the child, the moral dilemma of a deeply religious woman genuinely concerned for her step-daughter, and the profound shame of their family’s scandal culminating in her anguished confession spilled over the stage and filled the opera house with an intensity of feeling rarely attained.

The production, from Dallas Opera, designed by Allison Chitty, conveys the rural setting and the cottage interiors with a distinctly contemporary look, simply and imaginatively conveying a sense of place. The stream running across the front of the stage in the first act shimmers its reflections around the proscenium; it waters Jenufa’s rosemary plant, but, unseen, will play a darker role in the later acts.